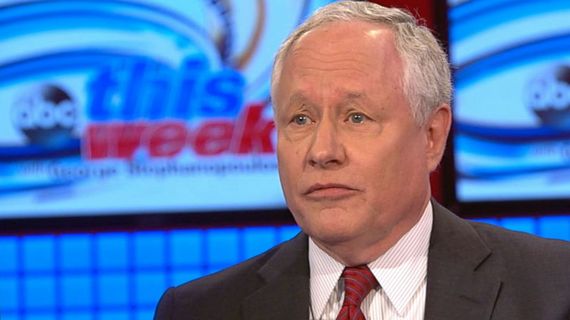 It is no secret to anyone who has been paying even the slightest bit of attention to the 2016 presidential race that Bill Kristol, editor of the Weekly Standard and proud neoconservative, has a special place in hell for Donald Trump. To Kristol and the rest of his friends in the neocon camp -- a faction that has dominated the Republican Party's foreign policy machinery since 9/11 -- the possibility that a lying, woman-bashing, immigrant-hating, conspiracy-loving man like Trump would have enough appeal with grassroots primary voters to take over the GOP would be akin to a sick horror movie. And yet, when the process was all said and done, the horror was in fact real. The constant name-calling, the personality attacks aired on national television, and the anti-P.C., unscripted approach to political campaigning was more impactful than political pros could have dreamed of.

Four months, 16 candidates, 1,239 delegates, and over 11.5 million votes later, Donald Trump finds himself at the top of a Republican Party that is used to deciding its primaries by handing the nomination to the conventional candidate who happened to be the next in line. Supporters of the "The Donald" are beyond themselves that their man will be taking on the presumptive Democratic Party nominee Hillary Clinton in November -- a general election contest that is sure to be the nastiest in America's presidential history. To the likes of Kristol, conservative blogger Erick Erickson, conservative columnist George Will, the editors at the National Review, the GOP's four previous presidential nominees, and former State and Defense Department official Elliot Cohen, a President Donald Trump is a nightmare to be avoided at all costs. "This is a man," Kristol wrote on May 3, "whose temperament and character render him unfit to be president of the United States -- whether or not he succeeds in securing the nomination of one of our two major political parties."

Kristol, in fact, is so upset about Trump being the GOP presidential nominee that he has frantically searching around for someone, anyone, who would be willing to take on the loudmouth billionaire in November on a platform of conservative principles. When the news broke that the Weekly Standard editor-in-chief was recruiting National Review writer David French to be that candidate, a lot of the bloggers and pundits had the same reaction as I did: who in the hell is David French?

If you're not a rapid National Review subscriber, chances are that you have never heard of David French before. His resume, however, is distinguished to the point where Kristol felt comfortable enough to approach French and ask him to consider providing conservative, anti-Trump voters with another option besides staying home, voting for Hillary Clinton, or throwing their support to the Libertarian ticket.

If you want a brief biography of French, here it is. He has a distinguished war record, winning the Bronze Star during his service in Operation Iraqi Freedom. He is an attorney specializing in constitutional law. And he has written for the preeminent conservative political magazine for years. But with all of that saying, David French is an unknown commodity even to those who have read his writing. The best thing that Republican strategist Liz Mair could say about French was that she "read some good columns" that he happened to write.

Kristol won't admit it during one of his many television appearances, but his recruitment of French tells us all we need to know about his stewardship of the #NeverTrump movement: it has been a colossal disaster. When the best you can do is a magazine columnist with no political experience and zero name recognition, it's safe to say that you single-handedly exposed yourself as someone who didn't have any good options. Kristol has effectively put the kibosh on what little steam the #NeverTrump movement had left.

David French obviously wasn't Kristol's first choice. First there was 2012 GOP nominee Mitt Romney. He thought about running for president earlier in the year, but decided that he didn't want to be the Republican version of Adlai Stevenson. Then came Sen. Ben Sasse, the baby-faced freshman from Nebraska who was elected in 2014. He has a couple of young kids at home, so he declined to be that alternative as well. James Mattis, a highly respected General (Ret.) in the Marine Corps and former Commander of CENTCOM, didn't want anything to do with what he described as a poisonous U.S. political culture. Former Sen. Tom Coburn was a "no," as was Speaker Paul Ryan. So Kristol was left to people on the fringes like David French, someone who hasn't run for any elected office before and who has been largely confined to a small section of the conservative intelligentsia. A French candidacy is the equivalent of a Democratic Party operative like David Axelrod calling Katrina vanden Huevel at home and begging her with a straight face to lead the Democrats to the White House.

The only thing worse than David French running for president would be Bill Kristol taking on the job himself. But, like Mattis, Ryan, Sasse, and Coburn, Kristol would have likely come to the conclusion that leading an independent ticket so late in the game would be a waste of time.