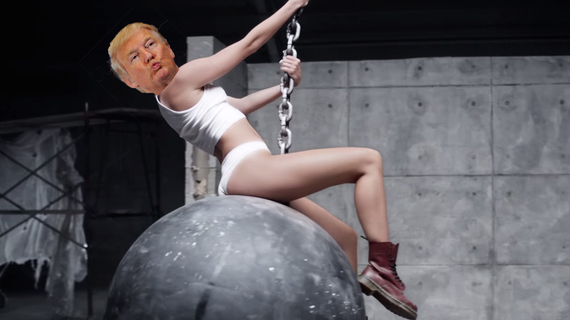 It seems as though some troublemakers never grow up.

Long before Donald Trump became the political joke and juggernaut of the 2016 presidential elections, he was once a young prankster with a reputation for being a class clown. While wildly popular among his peers, Mr. and Mrs. Trump saw this and other nefarious behaviors as signs of a larger problem, but hoped all would be fixed by sending teenage Donald off to the New York Military Academy for an attitude adjustment.

What a shame it didn't work.

With his iconic blonde comb-over, countless temper tantrums, and penchant for petty drama, Trump is still viewed as more of tabloid celebrity than a tangible political candidate. When Huffington Post announced early July that they were moving media coverage of Trump's campaign to their Entertainment section, they said what everyone else was thinking: "Trump's campaign is a sideshow."

Trump's poll numbers seem to surge significantly after his controversial tirades. And Trump has received more media coverage than any of the other candidates combined -- of the less than 2 hours ABC, CBS, and NBC have spent covering the campaign trail over the last two months, Trump alone was the primary subject of a full 60 minutes. However, Trump's rise can't be solely blamed on the intense scrutiny of the "liberal media circus": Fox News featured the candidate 30 times on their network, and in a recent CNN/ORC poll, Fifty two percent of registered Republicans and Republican-leaning independents want Trump to stay in the race.

While one might be initially surprised, Trump's popularity makes sense: who can resist a seemingly harmless candidate with such blatant disregard for political norms and what others think? Whether ranting about how Mexican immigrants are "bringing drugs, bringing crime, and being rapists" or calling Hillary's anti-big business statements a bluff, we still believe that we can't possibly take him seriously: Trump is as captivating, entertaining, and seemingly impotent as Miley on a wrecking ball.

But perhaps we underestimate Trump at our own peril. For all his crazy statements, Trump is smart -- he's managed a multibillion dollar business conglomerate and has made money off of those severing ties with him. He knows all the big guys, on both sides, and the ways to pull their strings.

And, while it makes sense how the current climate of moral superiority and fiscal entitlement within the Republican party created this monster; it is not immediately clear how he's soared to the head of the pack, until you realize he's exactly what the Republicans have been touting as the ideal.

At his essence, Trump is nothing more than the quintessential Job Creator: a distilled and human version of the modern Republican ideals of big business, small government, and the freedom to say whatever the hell you want.

For a party who for years has been feeding off of growing public anger towards the administration and the establishment, Trump is the movement incarnate. "I'm not in the gang," he recently quipped during a recent interview with The Hill. "I'm not in the group where the group does whatever it's supposed to do," he continued. "I want to do what's right for the country -- not what's good for special interest groups that contribute, not what's good for the lobbyists and the donors."

But the Republican party may have bitten off more than they can chew with Trump, and party establishment is scrambling to claim Trump doesn't represent them. Many, pointing to his inflammatory comments about Mexican immigrants and John McCain not being a war hero, say that Trump is badly hurting their GOP brand. Many corporations that work with Trump have also severed ties with him in light of the controversy generated from his campaign: Univision, Macy's, Serta, NASCAR, and even ESPN have all dumped Trump within the span of three weeks.

Most recently, Republican presidential candidate Lindsey Graham, who was the target of Trump's phone number stunt, saw Trump as an impending danger for the party. "I would ask the Republican Party to understand why most major companies are firing Mr. Trump, and I don't think we should hire him," Graham said during an appearance on ABC's "This Week." "I think he's appealing to the dark side of American politics, he is not offering solutions to hard, complicated problems. He is basically selling fear and prejudice."

It may seem ironic that Republican candidates are calling Trump out for perpetuating "fear" and "prejudice" when these same critics are equally guilty of doing the same. But Graham's remarks signify a growing realization within the party: like Frankenstein, they are unable to grapple with the wild nature of their own creation.

And despite criticism from party leaders and other presidential candidates, Trump appears to be propelled by the engine of controversy. He seems to give us what is sorely missing from modern day American politics: unfiltered truth.

If one cares to perceive Trump's bluntness within this context, his reckless campaign is only admirable because it takes guts, calling out powerful people on both sides of the political spectrum. Wall Street Journal's Jason Bellini chalked up Trump's success to modern American voters who crave the unbridled bluntness that is apparent. Donald Trump isn't appealing to politics; he's appealing to people.

In his own words, Trump is "not surrounded by all sorts of pollsters and PR people." Though he claims he doesn't "do the email thing," Trump does have nearly 3.7 million Twitter followers and has tweeted over 27,000 times, most of which consist of mouthing off at anyone who's pissed him off as of late or quoting every Joe Schmoe who thinks Trump would be a great president. When a recent New York Times piece revealed Trump had called lawyer Elizabeth Beck, who asked for a recess during a deposition she was conducting to breastfeed her infant, "disgusting," Trump tweeted that "Lawyer Elizabeth Beck did a terrible job against me, she lost (I even got legal fees). I loved beating her, she was easy"

While we could dismiss him as pure comedic fodder, Trump is a reflection of ourselves in ways that we're not ready to realize. He's a reflection of our American society: loud, crude, colorful, and candid. No one would put poised and Trump in the same sentence; he's not careful, he's possibly not calculated, he's unapologetic, but he also doesn't need to be: his seemingly infinite economic and social resources give him ample wiggle room to make a mess and still get away with it. In a recent CNN interview with Anderson Cooper, Trump was asked if it's okay to "play games" in order to make money. Trump responded, "It's called your life...the top person can't be bought."

Do we need Donald Trump? Of course not. For all his business acumen, he's not politically savvy, has no policy experience, and is unlikely to win against any serious challengers in the general election or even the Republican primary.

But do we deserve Donald Trump? Well, he's exactly what we've been asking for. Though Jeb(!) Bush may have an exclamation point in his logo, it is Trump who embodies the terribly noisy form of political sensationalism we've come to demand. Sarah Palin, who Donald Trump said he'd potentially "love" to have as a member of his cabinet if elected president, gave us a similarly sensational run that culminated not in the White House but in a reality television show; it would seem that the same public who propelled Palin to further fame through her stab at the presidency are the ones who are allowing this phenomenon to happen once again.

In the end, the satirical paper The Onion may have put it best in their piece imagining Trump's thoughts on his rise to political stardom: "Whatever your wildest expectation is, I promise you I will surpass it. You're not going to pass up an opportunity to see that, are you?"