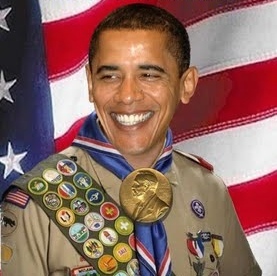 "Excuse me, have you ever seen the President lead a cabinet meeting in singing 'Michael Row Your Boat?'" - Donald Trump

Diverting his attention from tossing verbal hand grenades at Republican rivals Dr. Ben Carson, Marco Rubio and Jeb Bush, real estate mogul and reality TV show host Donald Trump directed his latest salvo at President Obama. Trump who has accused the President of not walking 'Presidentially.' and, has taken credit for the White House releasing the President's Hawaiian birth certificate, promises he doesn't plan on stopping there. The would-be Republican nominee for President is now demanding the President turn over the records from his days as a Boy Scout.

When asked if he had lost contact with reality, Trump harrumphed, "Excuse me, excuse me, but I have friends who have awesome kids who can cook a cordon bleu meal with just flint and spam and half a packet of Splenda and the family domestic helping only a little..."

When asked what he was talking about, Donald Trump interrupted, "Excuse me, excuse me, I hear Obama was the worst camp fire maker and an awful camp fire song singer."

When asked how he knew this, Trump grumbled, "Excuse me, have you ever seen the President lead a cabinet meeting in singing 'Michael Row Your Boat?'"

"But..." When CBS' Bob Schieffer started to ask another question, Trump cut him off: "Excuse me, in my opinion, it's horrendous and makes him the worst Boy Scout ever. Used to be Steven Hawking... That guy couldn't build a camp fire but did give instructions on building a nuclear powered cooking range."

When asked what the President could do to prove he was a good scout, Donald Trump answered: "Excuse me, let's put it behind us, Mr. President, if that's who you really are, and lead the next joint session of Congress in a sing-a-long of 'On Top Of Spaghetti' and 'She'll Be Coming Around The Mountain.' Now those are some real awesome campfire songs..."

The White House said in a prepared statement the President will not respond to Mr. Trump until he releases his own psychiatric records.