It is time to stop pretending that Donald Trump has the intelligence, integrity, or understanding to be President. He is not smart, he is not a good person, and he is not even a good businessman. If he was smart, he would not talk about how smart he is all the time. If he was a good person, he would not lie all the time. And if he was a good businessman, he would release the tax forms and other records to prove it.

He only knows how to do one thing. It is a technique that got him pretty far on reality television and as a famous-for-being-famous-type celebrity. It has now catapulted him into a job he did not want and is hopelessly inadequate for. He knows it and yet has neither the will nor the ability to learn from his mistakes and rise to the occasion.

The sole and only thing Donald Trump knows how to do is what economists call "externalizing." That means making others pay for your choices or behavior. He uses this technique in business and in responding to criticism.

Trump is a one-trick pony who externalized his costs over and over to make money by using the bankruptcy and tax laws and underpaying his contractors and those who worked for him to force others to pay the costs of his failures while he got to keep the profits. Those gains are probably less than he claims, of course, because otherwise he would show us the details.

That's it. That's all he knows how to do.

He uses this same technique to deflect any criticism or failure by thuggishly and childishly blaming anyone else, externalizing responsibility, with complete disregard for the truth. 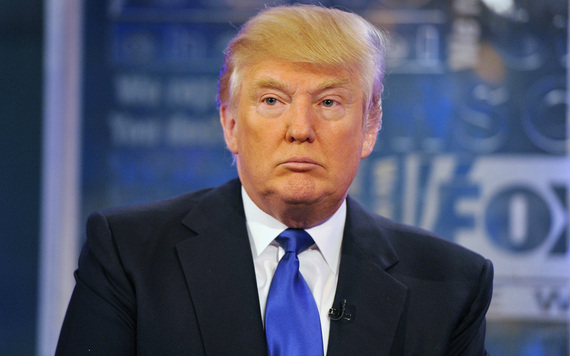 This is so reflexive it sometimes also reveals a complete disregard for the consequences. For example, he has bizarrely insisted on staying on as producer of his television competition series, "The New Celebrity Apprentice," yet another of his massive conflicts of interest, and presumably something he no longer has time for. So you'd think he was personally, reputationally, and financially invested in the show's success. But he is so incapable of understanding anything other than his own limited notion of "winning" that instead he tweets about how much better his ratings were than those of the new host, Arnold Schwarzenegger. He is willing to drive his own show into the ground to prevent Schwarzenegger from doing well.

The indispensable RoguePOTUSstaff got it exactly right, explaining that Trump doesn't care about succeeding; he only cares about "winning." So anything that goes wrong is always everyone else's fault. With complete disregard for the truth -- or any notion of personal responsibility -- he blames the media, Democrats, China, the CIA, or anyone else who has not paid absolute fealty and lavishly praised him. Remember John F. Kennedy's speech after the failed Bay of Pigs mission, which contributed immeasureably to his reputation for honesty and candor. Compare that to Trump's response to the failed mission in Yemen that resulted in the death of a Navy SEAL and an American child. Not only does he still continue to insist that it was a "winning" mission, but when Senator John McCain, one of the foremost experts on military operations and a member of his own party, criticized him, Trump said via tweets, "Sen. McCain should not be talking about the success or failure of a mission to the media. Only emboldens the enemy! He's been losing so...long he doesn't know how to win anymore."

Note that none of this has anything whatsoever to do with the facts or the substance. Insult is not argument. But Trump never explains why his view is different; he just disparages critics and accuses the other side of bad motives, whether it's a judge who has an ethnic last name or was appointed by a Democrat or a hit Broadway show he has not seen but is sure is "overrated." Tellingly this favorite insult implies that he knows something the rest of us haven't caught onto yet.

Trump also tries to obfuscate with "alternative facts" he just makes up. He told a group of sheriffs that the murder rate is up while as they know very well it is down, less than half its peak. Or he makes up a claim of "serious voter fraud" in New Hampshire. If he has evidence for these claims, we deserve to see it. If not, it is clear this is just another attempt to offload responsibility for his actions and statements.

Trump is curiously silent when he knows that an inconvenient truth is too clear to lie about. The suspect in the massacre of Muslims at a Canadian mosque is a white man with far right views, so Trump could not find a way to make it fit his narrative. Not even a tweet.

But when Nordstrom decided to stop carrying Ivanka Trump's clothing line due to poor sales, that got a response. It is in no way a legal or legitimate topic for him to address via his official Presidential twitter account (and reportedly while attending an intelligence briefing). But he did, not by making a business case but by whining that the decision was unfair -- Nordstrom should carry the brand because "She is a great person -- always pushing me to do the right thing!" One would hope that a man who brands himself as a businessman would recognize that commercial enterprises make decisions based on numbers.

Trump's response to any criticism or complaint is the same as the Wizard of Oz's: "pay no attention to the man behind the curtain." Or, in the words of Shaggy, that famous exemplar of avoiding personal responsibility regardless of the facts, "It wasn't me."

There's an old lawyer joke that if the facts are against you, you argue the law; if the law is against you, you argue the facts, and if the facts and the law are against you, you yell and bang the table. Trump does not know or care whether the facts or law are with him. He goes straight to the yelling and table-banging, and adds some insults just to keep people distracted and agitated. Look at his insistence on denying a conversation between his Supreme Court nominee Neil Gorsuch and Senator Richard Blumenthal, as confirmed by Gorsuch's own White House-appointed spokesman. I hereby suggest a new hashtag: #Trumpsplaining.

The problem is that Trump is now in the one job where externalizing costs and blame does not work. The President of the United States must consider all issues holistically because there is no one to externalize the costs onto except for other Americans. For example, consider the wall along the border of Mexico that was one of Trump's core campaign promises. He insisted that Mexico would pay for it, a classic example of externalization of costs. Mexico has said quite clearly that they will not. So, Trump has said that the US will fund it initially, and recoup the costs via tariffs. This overlooks the obvious consequence to US consumers, retailers, and manufacturers who will end up paying for any increase in the costs of sending produce and goods across the border.

And Trump's much-touted (by himself) deal with Carrier to "save 1100 jobs" came at great expense to Indiana taxpayers, who now have to pay for the $7 million in tax breaks Indiana had to give to Carrier to "save" those jobs. This is known as a cost, a subsidy, or corporate welfare. Furthermore, the "saved" jobs number is inflated and Carrier is using some of its windfall to automate even more jobs, so that number will decrease futher, not a very good deal for the people of Indiana paying at least $6000 per job "saved."

Here are some of the qualities one needs to be President, no matter which party or policies: the ability to handle both legitimate and illegitimate criticism with humility and grace, more than a 140-character attention span, a commitment to understanding other points of view, respect for expertise, a willingness to compromise, curiosity, diplomacy, and a commitment to be open and candid with the American people. Any President has to have a deep understanding of and appreciation for the Constitution and balance of powers. President is not the same as emperor or starship commander. He doesn't get things done Jean-Luc Picard-style by barking "Make it so." Congress and the courts both have rights, obligations, and powers and calling them "so-called" does not make that go away.

A President has to accept full responsibility for bad decisions as well as good ones. Remember the sign on Harry S. Truman's desk in the Oval Office: The Buck Stops Here. That is the opposite of externalizing costs and blame, a technique that may have taken Donald Trump to the White House but which will not make him keep his promises or meet his obligations. One might say he is overrated.