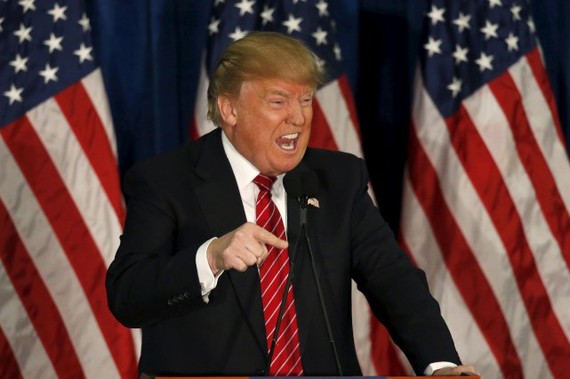 Donald Trump recently threw some more people out of his rally with the wave of his hand, and the headlines and tweets were again impressed. He does his own thing! He is different from everyone else!

He wants to be president of this country, and a lot of people seem to think he could be.

As social scientists we could spend our lifetime explaining this phenomenon, but one puzzle piece might be that in the United States the concept of the rugged individual is primal to our way of thinking. In our most popular stories, one hero (usually a man) sweeps in and individually succeeds at the most complex of tasks. He is a self-defined paradigm of independence, different from and even counter to everyone else. We love movies like that: They said it couldn't be done! HE PROVED THEM WRONG (cue to the footage of this man running through a lot of mayhem and emerging triumphant.) Even our advertising tropes celebrate the individual achiever -- think back to Apple's 1984 ad, with the solo shot-putter hurling a missile at conformist messages. Think of the cowboy, the vigilante cop, all the characters Bruce Willis always plays.

Western culture is crazily interested in individuality, and it is the mythical lens we see the world through, even in the face of obvious conflict with it. Hazel Markus, a Stanford psychologist, has spent much of her career studying this tendency. She has even found that Americans believe that what we think is completely individual. Instead of recognizing that our environments shape us, we constantly worry that other people and our environment are hindering us. These findings help explain why Trump and his supporters get so violently furious at any dissent.

What's wrong with thinking this way? Doesn't an individualistic approach to running for president best reflect our culture? Maybe, but only in the shallowest and most deluded way, for four reasons.

1. It's a lie. Framed positively, in the Trump phenomenon aggrieved individuals have found one another. The size and norms of the group are powerful magnets for new supporters. In a less sanguine light, a mob mentality requires a mob to persist. The Trump phenomenon is not individualistic. It is defined by in- and outgroups, insults and belonging.

2. It's unstable. Constant opposition to the norm means the maverick is continually shifting attitudes. After all, all an opponent has to do is say, "Only outsiders wear green shirts," and tomorrow, Trump's supporters will be in line to buy the now stigmatized color. Do they like green? Doesn't matter. Being defined by individuation means bring defined by opposition and opposition results in the same kinds of puppet strings as does being defined by any external force.

3. It's irrelevant. Trump is interviewing for the chance to represent everyone in a job that requires a lot of intellect, social savvy and cooperation. Nothing about this hyperindividualism makes a person qualified to run a country.

4. Worst of all, it's dangerous. Trump will fight to preserve the idea that he is free from all external influence; even that of his supporters. This brand of individualistic leadership means that he will not feel responsible for his supporters' suffering, unless it directly impacts him. Yes, he might pay a sucker-puncher's legal bills, but that's more a show of financial bravado than actual concern.

Mr. Trump is the nightmare of our dearest individualist hero dreams come true. He doesn't care what wreckage he leaves behind and does and says what he wants. And we have no novelist or script-writer in the background making sure this attitude works. In real life it can't work. Think of what a real coworker or boss like this would be like.

As Trump believes he's sailed in from the Wild West, he'll sail out again. We'll be left with the damage, good guys, bad guys and everyone in between worse off because of it.