Donald Trump's rise in the polls may be less important than the media "oxygen" he is consuming. A majority of Americans approve of the SCOTUS ruling on the ACA. And Americans are very patriotic -- Happy Fourth! This is HuffPollster for Thursday, July 2, 2015.

Businessman Donald Trump's support is on the rise among Republicans nationwide according to new polls released in the last week, but the attention paid to the Trump in the news and on social media may be of greater consequence in shaping the GOP contest.

The headline focus on Trump's numbers -- "Trump Surges," "Trump-Mentum: The Donald Soars," "TRUMP ON FIRE" -- obscures findings that may have more meaning. The same polls show former Florida Gov. Jeb Bush receiving slightly more support than other candidates in New Hampshire and nationwide and Wisconsin Gov. Scott Walker beginning with an early advantage over the field in Iowa.

Nevertheless, it is easy to overstate the meaning of early trial heat poll results. As Bloomberg's Jonathan Bernstein writes, " the relationship between such early polls and the eventual nomination results is weak." Candidate announcements tend to produce "short-term bumps" (as illustrated in last week's HuffPollster), and since few voters have formed "fixed candidate preferences at this point...they’re likely to say they support (or oppose) any candidate whose name has been in the news lately." Bernstein also noted "the 10 percent factor," echoing a tweet from political scientist Dan Drezner: "With about 15 or 16 candidates and no dominant front-runner, random variation in responses can have a big impact on the order of results in any particular survey."

In the long run, however, the news media attention that Trump is receiving -- and the attention voters are paying to it -- may be more important than his support (or the lack thereof) in the polls. According to Facebook, for example, Trump's announcement generated 6.4 million "interactions" (posts, comments, clicks of the "like" button" or sharing of posts with friends) among 3.4 million Facebook users, over a million more than for Ted Cruz (at 2.1 million) and orders of magnitude greater than the other Republicans that have announced so far. Only Hillary Clinton (10.1 million interactions among 4.7 million unique Facebook users) did better on her announcement day. 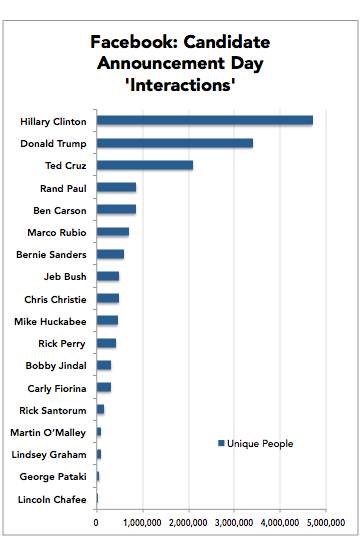 Similarly, Trump has also dominated the other Republican candidates in Google searches since his announcement two weeks ago, and that huge difference has persisted (as noted on Twitter by pollster Steve Koczela). On Monday June 29, for example (the most recent day for which Google search data is available), there were 38 searches for Trump for every 2 for Jeb Bush and 1 for Marco Rubio.

While increased media attention may have given Trump's numbers a modest boost, they obviously do not translate directly into electoral support -- otherwise, Trump would be far ahead of the Republican field. If anything, the opposite is likely occurring, as mostly negative stories reinforce impressions of Trumps already sky high negative ratings, including a majority of Republicans.

Trump's support, as measured on early horse race polls, may turn out to be less important than the attention paid to him by the news media and the apparent appetite for such coverage. If these trends persist -- if Trump continues to consume an outsized share of the media "oxygen" -- the long list of little known candidates will find it even harder to make news and emerge from the pack in the early states to challenge candidates like Bush and Walker who begin with higher recognition in Iowa and New Hampshire.

Trump's high profile in the race may also help frame the way voters evaluate the other candidates. Consider the answer Huffington Post's Scott Conroy got when asking a patron in a New Jersey bar about Gov. Chris Christie, just moments after he announced his candidacy this week:

“He’s better than that other clown,” she said.

A POLLSTER CHART DISCLAIMER - Some readers may have noticed a quirk that, as of this writing, exaggerates support for Trump on Pollster's national Republican primary chart. The chart shows a current estimate of 13.6 percent for Trump, even though the last three polls give him just 11, 11 and 12 respectively, far higher than the low single digit results that came earlier. The reason is that the chart is not based on an average, but rather a statistical procedure known as "local regression" (also known as LOESS) that attempts to draw a trend line that best fits the underlying data. As seen below, the Trump trend line moves sharply upward, splitting the difference between the 11 and 12 percent results taken roughly a week apart and continues upward. A more sensitive (less smooth) setting would force the line to the 12 percent result from the most recent poll. With more polls and time after the announcement, this quirk will disappear, but for the moment, our chart does slightly overstate Trump's current support.

DOES IT MATTER WHEN POLLS GO WRONG?' - Kathy Frankovic: "On May 8, the day after the British elections, everyone saw that the pre-election polls had gone horribly wrong. What was supposed to be a close election, with the possibility of a hung Parliament, had turned into a clear Conservative victory and Parliamentary majority. Election polls have become so much a part of political life and they are expected to be accurate, making these results quite a shock. A serious investigation is about to take place, and some are beginning to question polling itself. Should they? And should the British polling problem make us doubt the recent use of opinion polls to measure human rights needs and attitudes? No. There are a number of key factors to consider when debating the utility and accuracy of polls." [Open Democracy]

MAJORITY APPROVE OF SUPREME COURT DECISION UPHOLDING HEALTHCARE LAW - Kaiser Family Foundation: "Just over six in 10 Americans (62%) say they approve of the U.S. Supreme Court’s decision last week to continue allowing low- and moderate-income people in all states to be eligible for government subsidies to buy health plans through Affordable Care Act (ACA) insurance marketplaces, finds the Kaiser Family Foundation’s latest tracking poll. About one third (32%) say they disapprove of the ruling… Despite the majority’s favorable opinion of the King v. Burwell decision, though, the new poll finds the public’s view of the ACA remains largely unchanged immediately after the June 25 ruling, with 43 percent viewing it favorably and 40 percent unfavorably." [Kaiser] 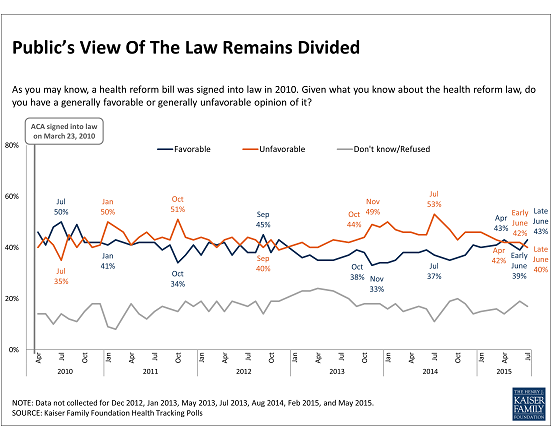 HOW PATRIOTIC ARE AMERICANS? VERY. - Kathleen Weldon: "This holiday weekend the American passion for patriotic display will reach its annual apex with fireworks, flags and 'God Bless America.' Public opinion polls confirm what foreign observers have often noted: Americans are a very patriotic people. But what does patriotism mean to the U.S. public, and how tightly is the ideal bound to its symbols? A review of public opinion on patriotism, from the Roper Center for Public Opinion Research archive:
[HuffPost]

-Bush and Trump rise to the top of GOP field after their campaign announcements; Clinton maintains her lead. [CNN/ORC]

-Pew finds that science and environmental views are rooted in political ideology. [Pew]

-Gay marriage opponents are split over whether it's time to move on. [HuffPost]

-Nate Silver estimates that one-half to two-thirds of the rise in support for gay marriage has been the result of people changing their minds on the issue. [538]

-Harry Enten's regression analysis implies that a lot of people reject the Republican Party because of its opposition to gay marriage. [538]

-John McLaughlin (R) urges Republicans to treat the Clinton candidacy as a bid for an Obama third term. [National Review]

-The Macalope warns of bad surveys reported by tech media. [MacWorld via @LSimonetta]

HUFFPOLLSTER: Here's The Real Impact Trump Could Have On 2016
Donald Trump