In the 1970s in New York City, dog poo was a whole to-do. A campaign to clean up the streets of excrement began when Fran Lee, an Upper West Side activist, started drawing attention to a purported link between feces on sidewalks and child blindness. What followed was something of a waste-management creativity renaissance: enthusiasts wrote up plans for everything from sidewalk dog toilets to poop-freezing sprays to city-funded "enviromaids" employed to pick up after dogs.

Ultimately, the solution was a simple mandate: Pick up after your dog. Many scoffed at the thought. My dad was among the dissenters. But, one day in the early 1980s when we were out together in SoHo with our dog Mabel, she went, we walked away, and then a stranger shouted at us for not picking it up. That moment changed everything.

Back then, our excrement removal routine depended on something once commonly found in most households: newspaper. Indeed, Fran Lee, the anti-poop crusader, specifically suggested people use The New York Times for this purpose. It was an exciting time for print media.

In our home, newspaper served several purposes, not a few of which had to do with animal care and control; it lined the ground for Mabel when she was a puppy; it was bedding for the guinea pig. Once, when he was coming home with the Sunday Times, my dad spotted a rat on the stairs and slammed the paper down, killing it. He wrote to the Times to tell them of this alternate use of their publication. They published it as a letter to the editor.

This was not the first time my dad's work was seen in a major paper. He is a prolific political caricaturist, and his send-ups were frequently in the publications I'd bring on walks. Often, while walking the dog, I would find myself interested enough in something that I'd stand over Mabel's deposit for a minute, finishing a paragraph. It was a habit I probably picked up from my dad. "I remember reading a Times article on a piece of paper I was using to scoop," he once told me. "It was about some new discovery regarding the stars and planets. My deep thought was about living out, at that moment, the perfect conjunction of the glorious and the disgusting. Needless to say, I never finished the article."

Years later I would go on to write for some of the newspapers we used to for this purpose. Was my choice of career determined by these stolen moments of paper-reading? Hard to say, but I know the secondary use for newspaper never left my mind. In the pre-blog era, if I found myself obsessing about an article I was writing, I'd remember the ephemeral nature of the medium. It'd soon be covered in shit.

When I got my own dog in the mid 2000s, I realized that my family had been living in the dog-waste dark ages. Even the most functional use of print media was on the wane. Every pet store carried small plastic bag rolls especially made for the purpose of poop. The bags were cheap, but it seemed weird to me to spend any money on a plastic bag that would be used to place poop into another plastic bag.

I wasn't a Times subscriber at that point, but, thanks to an abundance of takeout menus and old New Yorkers, I managed to resist the poop-bag craze for years. But seamless.com changed the volume of menus shoved under the door, and I eventually started to read magazines on my iPad. More recently I used supermarket plastic bags, but those are also in their golden years, thanks to online grocery delivery and increasing legislation across the country that imposes fees on their use.

So, I started to buy those darn rolls. Using them is part of a semi-daily ritual that is now about nothing but poop. To be sure, there are a few lines of decorative poop bags -- pink argyle, green stripes, etc. But... yawn. I dreamt of something that would tickle my intellect, not match my handbag.

This line of thinking led me to try to imagine a way in which we could embrace the ephemeral nature of printed content, while also injecting a bit of culture into a routine chore. Is there a way that turd-tidying could be, again, a time to take in a tidbit of art, or even literature? Could we use our dogs' waste to perhaps make a political statement? Is it possible that these small moments of civic duty (doodie!) could get us to look up from our phones and actually, in some way, alter the way we look at the world?

I brought the idea to my father. He has caricatured presidential hopefuls for many decades and has dabbled in unusual media before -- in the 1980s, he sculpted Ronald Reagan out of chopped liver. 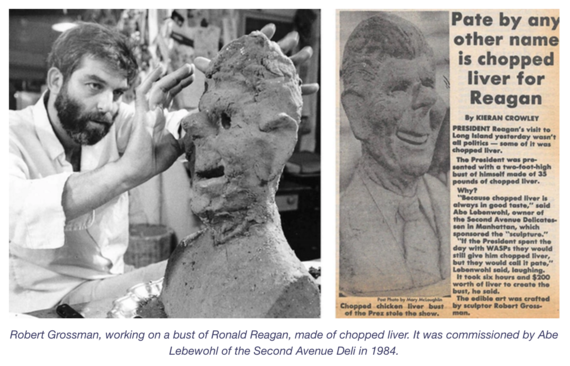 Could I mine his talent to put something meaningful on a bag meant for excrement? Who would be the appropriate person for him to caricature for this purpose? It'd have to be someone in the news -- maybe someone generally disliked by the kind of people who would appreciate a bit of wit in an unusual place. The answer seemed obvious: Donald Trump. His name even contains the word "dump!" It was meant to be.

Dad initially refused -- he did not want to be associated with poop. I argued the point: Is poop not one of the great equalizing factors of mankind? He complied.

I didn't have such luck in the other direction: Poop bag makers wanted nothing to do with Trump. There are only a handful of US-based factories that have the machinery to make the kind of small rolls I wanted, and all said they did not want to be involved in politics. After much searching, I finally found a factory in a place that was thrilled to print Donald Trump's face on a minimum of 5,000 poop bags. That place was China.

Call it a physical manifestation of editorial commentary: Experience the joy of smashing the presumptive GOP candidates face into excrement. But the fun doesn't end there! Tie it up and put it on display on the curb -- his head filled with your dog's shit. 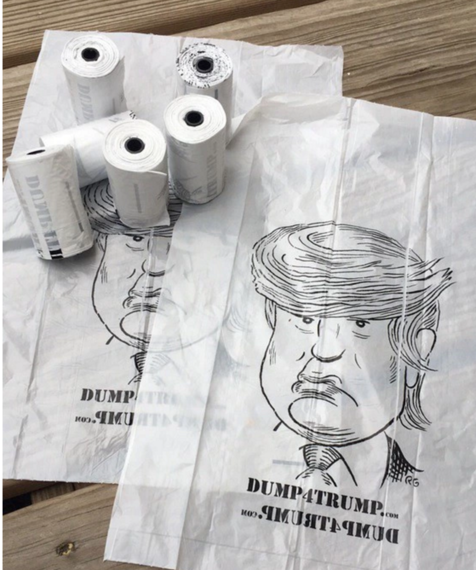 My years as a print journalist may be in the rear view, but as a curator of plastic bag art, I've only just found my preferred medium. The Donald Trump bags have inspired me to go big: Why not a subscription service! PoopBag OfTheMonth.com was born. What do YOU want to see on your poop bag?! The only limits are your imagination! And the size of the crap.