Every teacher, to their disgust, has seen it. When the birthday piñata is broken, one greedy kid elbows his way forward and grabs more than half of the candy for himself. All of the other children share what remains.

That’s exactly what is going on with income in the United States, according to an analysis released last week by Berkeley wealth researcher Emmanuel Saez. He found the richest 1 percent of families grabbed more than half of all of the nation’s income growth between 2009 and 2015.

And now, the 1 percent have their own personal presidential candidate, a rich man’s hero who will ensure they can continue taking far more than their share of wealth. That would be Donald Trump. He’s not some measly quarter billionaire like Mitt Romney. Trump is a bona fide billionaire, ten times over. And he’s no stinking nouveau riche Republican. He’s a scion, born to wealth, bred on baby bottles inlaid with gold leaf and infused with arrogance.

Trump’s tax plan, his refusal to raise the minimum wage, his insistence that American workers make too much money, his anti-union stances, all endear him to his fellow 1 percenters. With pledges like these, Trump plans to guarantee that he – and his billionaire buddies ­– can continue taking too much. 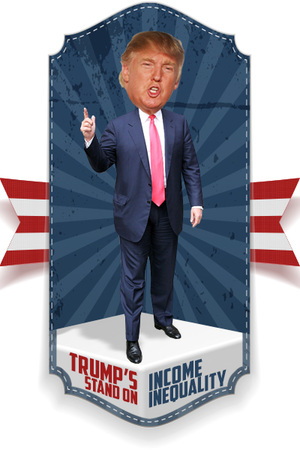 They’re taking so much that income inequality is now at the highest level ever recorded in American history.

That explains the Federal Reserve report in May that said nearly half of all Americans would not have the resources to pay $400 for an unexpected bill such as a broken leg or smashed fender.

What is $400 to a 1 percenter? A petty extravagance: A fifth Coach purse. A haircut. An extra bottle of wine at a Manhattan dinner party.

Donald Trump will ensure the 99 percent stay in their economically stressed place and his fellow 1 percenters continue to consider $400 throwaway cash.

One guarantee of this for Trump’s fellow fat cats is in his tax plan. Billionaires – like Trump – and their heirs – like Trump’s children – would be huge beneficiaries.

Trump would cut the income tax rate for everyone, but the wealthiest would get the most. He’d reduce the top tax rate of 39.6 percent to 25 percent. And he’d slash the top corporate rate by more than half from 35 percent to 15 percent.

He would eliminate the estate tax, which applies only to inheritances of more than $5.4 million. That means his children and those of all other billionaires would inherit without paying taxes, establishing in the United States the wealth dynasties of Britain. No more pulling yourself up by your bootstraps. Just languishing yourself by your legacy.

The cost of ending the estate tax is $246 billion. Trump hasn’t explained how he’ll pay for that. But since he’s a Republican, there’s no doubt he’ll take it out of programs that benefit the middle class like Medicare, Social Security, education, and veterans’ services.

Under Trump’s “everybody gets a break” plan, his 1 percenter buddies would get an average annual tax cut of $227,225. That tax cut is nearly five times the entire annual income of the average worker.

That’s something, no question. But $2,571 just doesn’t compare to the $227,225 gift Donny’s golf buddies would get. In fact, the top 1 percent would rake in 37 percent of the total value of all of the tax cuts. That’s the 1 percent grabbing too much for themselves again.

Citizens for Tax Justice and others have calculated that Trump’s tax plan would cost $12 trillion over a decade. That is almost exactly the amount that the Congressional Budget Office estimates the nation will spend in that time for discretionary programs such as defense, veterans hospitals, environmental protection, food safety, education, cancer research, occupational safety and federal emergency management.

He would, after all, be ruling for the 1 percent. He is the billionaires’ champion.

He’s made no secret of his disdain for the plight of the poor and working people. He said he would not raise the minimum wage. That is $7.25 an hour. It is an amount so wretched that it’s impossible for a worker to survive on.

But what would Donald Trump know of that? He flies his private jet, with gold-plated seat belts, between his $200 million, 58-bedroom West Palm Beach estate, his $100 million New York City penthouse with a gold and diamond encrusted door, and his $20 million country house in Westchester, N.Y. He once bought a $29 million, 281-foot super yacht he dubbed, of course, Trump Princess from the Sultan of Brunei. He owns three helicopters, a fleet of cars and a custom-built motorcycle with 24-karat gold parts.

The guy with the gold bike also said American workers’ wages are too high. That’s right. Trump said the laborer who can’t come up with $400 to pay a medical bill is making too much money.

Trump is a hero to the diamond-encrusted-penthouse-door coterie for his plan to turn the United States into a fiefdom in which billionaires rule for the benefit of billionaires. The previous Republican presidential nominee, Mitt Romney, expressed his disdain for 47 percent of Americans who he said were undeserving of a rich man’s attention. Trump intends to ignore the needs of more than twice that many – the 99 percent.