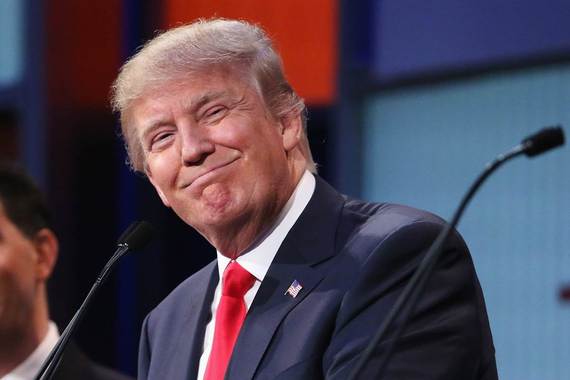 When Donald Trump announced his candidacy for President, he got his first massive roar when he said "the U.S. has become a dumping ground for everybody else's problems." That was his thesis, his central premise. Since then, he's scaled it into a political platform.

The U.S.'s problems are everyone else's fault. The U.S. doesn't "win" trade deals with China and Japan anymore. The epidemic of violence will be solved by keeping out Muslims until "we get a handle on what's going on." Every single politician in Washington is a loser, and is probably also stupid, low energy, and/or phony.

Depending on where you stand, it was willfully ignorant, actively dangerous, borderline fascist, or a sheer relief to hear spoken aloud.

It was also the opening salvo for a marketing campaign of sustained brilliance.

2015 was the year of content marketing. It was the year that the concept of a simple blog was turbocharged as companies reinvented how they interacted with customers.

Marriott now has a full-scale content studio that puts out, among other things, a magazine called "Marriott Traveler". GE topped the iTunes podcast list with "The Message", a fictionalized story incorporating real GE products. EA promoted Madden 2016 with "Madden: The Movie", a five-minute video starring Dave Franco and various NFL players that doesn't make much sense but was preposterously entertaining and went all sorts of viral.

"Doesn't make much sense but is preposterously entertaining and went all sorts of viral" is Trump's success in a nutshell. But this isn't entirely a case of right place, right time. The Donald has always covered his content marketing fundamentals beautifully.

The first step is to establish yourself as an expert in the field. Trump's first masterstroke was coauthoring The Art of the Deal. A lot of people have expertise; the leap from one of many with 'expertise' to 'the expert' is accomplished in writing.

Second, he mastered consistency. As he parlayed his book into real celebrity, and real celebrity into The Apprentice, he crafted an image that he never stopped inhabiting. That art, when companies do it, is called branding.

When Trump did it, it created the reputation of a ruthless businessman who could find and exploit any weaknesses for his own gain. He took the phrase "you're fired!" and turned it into a meme.

He became The Donald.

Third, having gained access to a massive channel (NBC's audience in the pre-iPhone days), he leveraged it for growth. In public, he was a generous braggart until someone dared cross him. Even his divorces were tabloid fodder, but he never avoided the spotlight or strayed out of character.

Depending on who you ask, we're approaching or are past the content marketing convergence: the moment branded content becomes as good as, or better, than traditional media in the same space.

GE's "The Message" rocketing into the iTunes top 10 alongside traditional podcasts like "Serial" and "This American Life" is one example. Trump vs the Republican field is another.

Politicians have to juggle the donors to whom they are beholden and the voters they must sway. They hire entire teams to construct their image, and sway as necessary in the political wind (Marco Rubio's turnaround on immigration is a great example).

The guy they're up against is a one-man brand. Trump followed the process above to a T. He established himself as the un-candidate, the outsider who needs no funds (not entirely truthfully). In other words, he became the expert in what the people want.

Since then, he's effortlessly stayed on message. The people at his rallies don't want nuance or substance; they feel that's exactly the problem. They want to blame someone, and Trump, the anti-politician, will gladly point the finger.

Banking on his own brand, he's weaponized Twitter. In 140 characters, you can't have a substantive policy debate or flash numbers. All you can do is levy an insult or throw down a broad crowd-pleasing statement.

With the Iowa caucuses upon us, and the first votes of substance about to be cast, we are in for a fascinating step in the electoral process. This might mark the beginning of the end of Trump's poll-topping crusade, or he might astonish the country (again).

Either way, his campaign to this point has been a content marketing masterclass. One could even say it's been "huuuuuuuuuge."