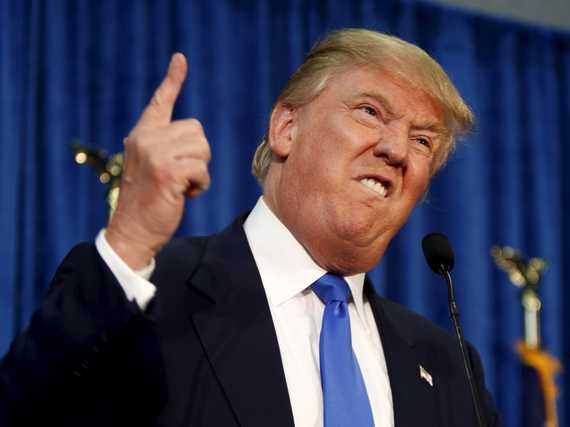 Many years ago, I had a surgeon with a terrible bedside manner. He was abrupt and spoke above my level of understanding. There was nothing about this man that I liked. But he had a great reputation as a surgeon, and surgery was what I needed. And the surgical theater is not equivalent to the theater in which people pay to be entertained. I said at the time that no matter how odious a person was, my choice would always be to take the doctor who would perform the most successfully in the operating room.

I'm at that moment, again, regarding Donald Trump. I've always disliked Trump, decades before he began making noises about a political career. I disliked his megalomania, his arrogance, his overuse of superlatives. I have nothing against people who inherited their fortunes. Like anyone else, they make choices about how to use that money. Trump used his for personal gain. That was his choice. Thankfully, it was easy to ignore him. My world and his were not connected at any level.

When Trump entered the world of reality TV, I made it a point to never watch the show. I merely noted that he was probably perfect for the role that he played.

When Trump jumped into the Obama birther movement and wrestled it to the ground, I was appalled. I could make no sense of why he cared. For me, the evidence of Obama's foreign birth was non-existent. I had attributed that movement to people who were pissed off that their country had elected a black president. Much as I didn't like Trump, I would not have put him into that category.

When Trump declared for the presidency, I didn't take him seriously. I assumed that what he really wanted was to rule the world in some ultimate global reality show, and to be able to scream "You're fired!" to anyone on the planet who displeased him.

It wasn't long before I started to feel really uncomfortable about his candidacy. My discomfort was in the following areas:

When Trump railed against political correctness, the result was that for him, it excused behavior that showed a real disrespect for the people whom he hoped, one day, to govern. For me, that was a huge problem. Even worse was the feeling that most of the people he degraded, he did so, not based on political disagreement, but rather on his perception that they disrespected him in some way. For me, that didn't bode well for a president who must operate on the world stage and deal with people whose opinions and behaviors are sometimes offensive and insulting.

When I really listened carefully to him, much of what he said sounded eerily like the conversations I have with my post-menopausal female friends. Because we have episodes of losing nouns and pronouns, we say things like "that guy who was in that movie..." and "I love those things that..." In Trump's case, it was:

"We are going to close the borders to Muslims, until we figure out what's going on.

He said that, even if waterboarding didn't achieve the results we wanted, he was still in favor of it because "these guys have chopped the heads off Christians and other people also. And they did other stuff also. Even if waterboarding doesn't work, they deserve it anyway."

I try really hard to understand him, but I'm always left with the creepy feeling that most of what he says is completely open to the interpretation of whomever is listening. And given some of the people who listen to him, that's a pretty scary proposition. In fact, it's a scary proposition, period. I'd like to know who I'm following. I don't want to make up whatever I'd like.

I cringe every time he tells people that he will solve problems simply because he is a problem solver. Or that we as a country will win simply because he is, personally, a winner. Or listening as he reverts to telling a story about his success in negotiating or in building big buildings or in running his rivals into the ground. I'm not a political science guru, but I feel pretty sure that operating on a world stage is a bit different from controlling real estate development in New York or Las Vegas. I need more from a president than a declaration that he/she will solve problems. I need details about exactly how he/she expects to do that.

I am appalled at how he plays so fast and loose with facts, especially when the veracity of such facts is so east to check. He asks me time and again to trust that he knows what I do not, that he has access to information that no one else does. Or that he has seen with his own eyes what no one else has seen. He also asks me to trust that in a short period of time, he will get "smarter than everyone else" about something that he might not know about at that moment. I'm, by nature, a trusting person. But I'm also a discerning person. I know that politicians sometimes play fast and loose with facts. In Trump's case, there are very few "facts" that he utters that can be verified. Forgive the language here, but when I listen to him, I have the feeling he is pulling some of this stuff out of his butt.

Trump has a couple interesting ways to destroy ISIS. The first is to "get all of the computer geniuses out there to figure out a way to keep ISIS from being on the internet." That comment, alone, shows a pretty profound lack of understanding of what the internet is or how the internet works.
"Next, I would just bomb those suckers, and that's right, I'd blow up the pipes, I'd blow up the refineries, I'd blow up every single inch, there would be nothing left. And you know what, you'll get Exxon to come in there, and in two months, you ever see these guys? How good they are, the great oil companies, they'll rebuild it brand new... And I'll take the oil."

This shows another pretty profound lack of understanding, on several levels. I'm not even sure where to begin with this one. I'll only say that if Trump believes that ISIS is one entity that lives in a large clump, somewhere in the Middle East, he is mistaken. Or maybe he plans to bomb the entire Middle East.

Trump's solution for the economy is to allow "Wall St pros to run the country." We are still reeling from the effects of Wall St pros basically running the country. I, for one, am not enthusiastic about another go-around.

He would repeal Obamacare on his "first day in office." Say what you want about the pros and cons of Obamacare, as well as the cost of repealing the taxes levied by Obamacare ($353 billion), at the very least, this statement shows a serious lack of understanding about our political process.

Climate Change Trump has called climate change a plot hatched by the Chinese. He has also called it "weather," meaning it's just the normal course of the ebb and flow of our usual weather patterns. In other words, it's no big deal. I won't belabor all of the reasons why climate change is neither a plot hatched by anyone nor business as usual. Scientific minds far more knowledgeable and brilliant than mine have pretty much put that argument to rest. I'm aware enough and concerned enough to want a leader who appreciates that climate change has implications that are a threat to the planet and to those who inhabit it. And I strongly suspect that it's people like Trump who will be the first ones who start screaming "What the fuck is happening?!" when water becomes the resource that wars are fought over, when food supplies start drying up, when increasingly destructive weather patterns become the norm, and when insect-borne diseases start spreading to ever-widening parts of the planet. By then, it will be too late to blame the Chinese or anyone else.

Ezra Klein said, "Trump doesn't offer solutions so much as he offers villains. His message isn't so much that he'll help you as he'll hurt them." His supporters understand that, and they love it. When the announcement came that Trump had won the New Hampshire primary, people started chanting "Build that wall!" "Built that wall!"

I keep hearing that, as a billionaire, Trump is his own man, beholden to no one. As an outsider, he will do things his way, rather than subscribe to the party line. In fact, he won't follow any line, other than the one he creates. His followers take great comfort in all these things.

Trump is the ultimate side-show: larger-than-life, colorful, unlike anything ever seen before, and a just little bit scary. Always unpredictable, always entertaining. As a citizen of this country, I expect more from my president.