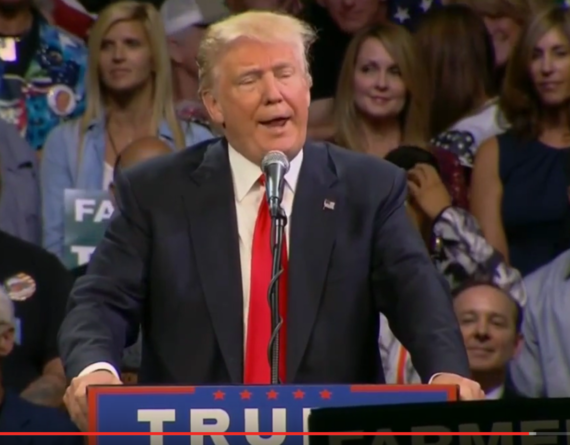 Today in a rally in Fresno, California, Donald Trump made a few comments about water. They were all inanities, parroting old Republican mis-statements and misrepresentations about the causes of California's water challenges. Apparently, he was fed these lines and comments in a meeting with some representatives from the agricultural sector right before his Fresno rally.

Below is a partial transcript made from the parts of his Fresno speech related to water. [Apologies for any errors transcribing his speech. It was painful to listen to and his style and grammar are pretty non-linear.] The gist of Trump's mostly content-less statements is:

(1)There apparently isn't a California drought (though, look here).
(2)The entire water problem is the fault of environmentalists and California's senators who "shove" all the water out to sea to protect "a three-inch fish" (referring to the endangered Delta Smelt).
(3)And when he "wins" he's going to come back to California and "start opening up the water."

Who knew California's water problems were actually so easy to solve?

Here are the highlights of Trump's disjointed, factually wrong, and weirdly self-congratulatory comments. (See below for context. The full speech can be found here, with a short clip related to water here.)

When I just left, 50 or 60 farmers in the back and they can't get water and I say how tough is it, how bad is the drought? There is no drought. They turn the water out into the ocean.
...
We're going to solve your water problem. You have a water problem that is so insane. It is so ridiculous. Where they're taking the water and shoving it out to sea.
And I just met with a lot of the farmers, who are great people, and they're saying we don't even understand it, they don't understand it, nobody understands it. And I've heard this from other friends of mine in California where they have farms up here and they don't get water.
I said, oh, that's too bad, is it a drought? "No, we have plenty of water" and I said well what's wrong and they said well we shove it out to sea. And I said why? And nobody even knows why and the environmentalists don't know why. Now they're trying to protect a certain kind of three-inch fish. But...
No, no think of it. So nobody even knows why. And by the way the environmentalists don't know why.
And you know I should say this, I've received many, many environmental rewards. You know, really. Rewards and awards. I have done really well environmentally and I'm all for it.
...
You know we want jobs. We have to bring jobs back. And if we can bring this part of the world water, that we have, that we have, but it's true, I've gotten so many of the awards. And I'm proud of them. But and there are some great environmentalists and some great environmental people. And they really do...
You know my environmental standard is very simple and I've said it to everybody: I want clean air and I want clean water. That's what I want. Clean air, clean water.
Very, very simple. So anyway so we're going to be back up here. If I win, believe me, we're going to start opening up the water so that you can have your farmers survive. So that your job market will get better.
No but there are some things that are inconceivable. That you know, they happen, and you wonder why. I'm asking everybody why, why, why, and nobody can really explain why they do this. But they do it. And your senators are for it but they're total ineffective, unfortunately. They're ineffective. You know, they're for it. By the way, they're for it for you, and then for the other side they're for it for them. And then you wonder, I wonder why nothing happens.
But when you're with the senators they want you. And then they go over to the environmental side and they want them.
And then you say, gee that's strange. They're for me. We want the water but the environmentalists just endorsed them. I wonder why. Well I'll tell you how it works folks. So they play both sides of it. But they're actually not for you. So we'll see what happens.
But we're gonna get it done and we're gonna get it done quick. Don't even think about it. That's an easy one. Don't even think about it.