The time has come to start weighing in on presidential candidate Donald Trump's statements on economic policy. In this post we examine his comments about U.S. government debt. After saying that he is the "king of debt" and that he "loves debt," Mr. Trump recently went on suggest that if interest rates were to rise, he would seek to "make a deal" on U.S. Treasury debt. In his words, "I could see long-term renegotiations where we borrow long term at very low rates." He also called this action: "refinance debt with longer term."

Mr. Trump appears to assume that his sensibilities as real estate mogul and dealmaker can be directly applied to government debt management policy. They cannot. Treasury securities bear absolutely no resemblance to the debt issued by Trump Entertainment Resorts, which went bankrupt in 1991, 2004, 2009, and 2014.

Treasury debt is the world's safest, most liquid and most widely held financial asset. As a result, it serves as the benchmark for the entire universe of fixed-income securities, both domestically and internationally. Treasuries have achieved that enviable status because investors have faith that the U.S. government--unlike default-prone corporations and some sovereigns--will make its payments on time in good times and bad; and that it will never seek to renegotiate, restructure or manipulate the value of its debt through special arrangements with a coterie of investors, however great the short-run temptation may be. By limiting its resort to such options--even in difficult times--the Treasury has established U.S. government debt as the bedrock of the global financial system. In the arena of sovereign debt management, as in many other policy arenas, rules trump discretion.

In this post we will make two points. First, the United States benefits tremendously from its ability to issue Treasury securities at low cost regardless of financial conditions. This benefit is inextricably tied to the role of the U.S. dollar as the world's reserve currency. Second, candidate Trump's statements risk undermining investor confidence in U.S. debt. It is no exaggeration to say that the sudden loss of these safe assets, and of the privileged reserve status of the dollar, would be a disaster for the country and the world.

To illustrate the importance of these fundamentals of global finance, we have decomposed the ownership of Treasury debt over the past 15 years (see chart). The most striking aspect of this chart is the extraordinary rise of foreign holdings, which currently stand at over $6 trillion. Two-thirds of this foreign ownership is held by official institutions (and one-fifth is held by China). Even as the level of Treasury debt surged from less than $2 trillion in 2001 to more than $13 trillion in 2015, the share of foreign holdings rose from 30% to 45% of the total outstanding while the marginal cost of issuance--in both nominal and real terms--sustained a trend decline. Apparently, overall demand grew even faster than supply. (Meanwhile, U.S. commercial banks hold $2.3 trillion, which exceeds their total equity capital by a substantial margin.) 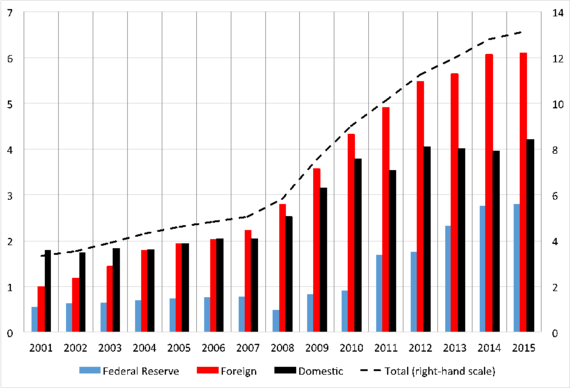 Before we continue, it is worth emphasizing that the current level of U.S. marketable Treasury debt--less than 75% of GDP--is fully affordable even if interest rates were to return to pre-crisis levels. Put differently, there is simply no question today about the ability of the U.S. government to pay. Consequently, any risk of default must reflect doubt about the willingness to pay (that is, debt repudiation). Does that matter? The answer is yes--even for a country like the United States that can readily afford to pay. For example, when Congress tried to use the debt ceiling to compel the Administration to alter budget plans in 2011, one leading credit rating agency cited "political brinksmanship" as the justification for downgrading U.S. Treasury debt from AAA--ranking it below Australia, Canada, Denmark, Germany, the Netherlands, Norway, Sweden, Switzerland, and the United Kingdom. And, at this writing, the U.S. downgrade has not been reversed.

The willingness of foreigners to hold a large volume of Treasury securities benefits the United States in at least two ways. The first is what the then-Finance Minister (and later President) of France, Valéry Giscard d'Estaing, called America's "exorbitant privilege." This is the ability to finance debt at lower interest rates due to the demand for U.S. dollars as a reserve currency. The current consensus is that the United States receives a financing benefit in the range of 0.5% of GDP per year (see here).

The second benefit arises from the fact that governments, businesses and investors outside the United States use dollars for a wide range of activities. The use of dollar liquidity services elevates foreign demand for dollar assets, allowing the United States to spend more than it produces (that is, to run a current account deficit) for an extended period without undermining the dollar's role as a reserve currency. In an earlier post, we estimated that sustainable current account gap (using a back-of-the-envelope technique) at between 2% and 2½% of U.S. GDP.

The bottom line is that U.S. Treasury securities hold a unique position in the global financial system. Their importance is so great that--ironically--Treasury debt is viewed as the safest global asset even when a financial crisis originates in the United States and spreads abroad. For example, when Lehman failed in September 2008, global investors rushed into Treasuries. Everyone's abiding faith that the U.S. government would always pay its debts in full and on time made Treasuries a refuge in the world's greatest financial storm since the 1930s.

But loose talk about default and debt restructuring can quickly undo trust that has taken decades to build. There is a world of difference between Treasuries--where the ability to pay is not in doubt--and corporate debt that frequently defaults. Treating them as comparable threatens both the value of Treasury bonds and the place of the dollar in the world. To see how, think about what happens when a financial instrument that has been insensitive to credit information ("no questions asked") suddenly becomes sensitive to information about the borrower's evolving ability and willingness to pay. The short answer is that you have a crisis, with skyrocketing risk premia (see here for a detailed discussion); at least, that is, until investors with the knowledge and tools to evaluate the credit risk enter the fray.

One recent example helps to drive home the point. At their October 2010 meeting in Deauville, France, European heads of state agreed that a part of the solution to the Greek crisis was for private bondholders to share in losses when writedowns were needed. Had this "private-sector involvement" (PSI) standard been introduced clearly with the inception of the euro in 1999, it would have promoted greater market discipline and helped to prevent excessive sovereign borrowing. Instead, central bankers and financial regulators treated all euro-area sovereign debt as equivalent and free of default risk. The Deauville agreement changed this by introducing credit risk into what had been thought to be safe government bonds. Then, in June 2011, it became clear that Greek bondholders would be forced to take significant losses--in the range of 50 to 75%. (For a summary of the Greek restructuring, see here).

The awkward handling of the Greek debt crisis had major consequences throughout Europe. In Italy, for example, the yield spread on long-term government bonds over equivalent-maturity German government debt skyrocketed in 2011 as the terms of PSI in Greek bonds became clear (see chart below). New doubts about the safety of Italian sovereign debt led investors to demand greater compensation for holding them. To put it differently, what had been an information-insensitive asset had suddenly become an information-sensitive one. And, investors who wanted the former were not interested in doing the costly monitoring required to manage holdings of the latter. Italy's funding costs eventually plunged again--partly as a result of an improved institutional framework in the euro area--but, at well over 100 basis points, the yield spread lingers far above the pre-crisis norm. And, the reputational damage may never be completely undone. 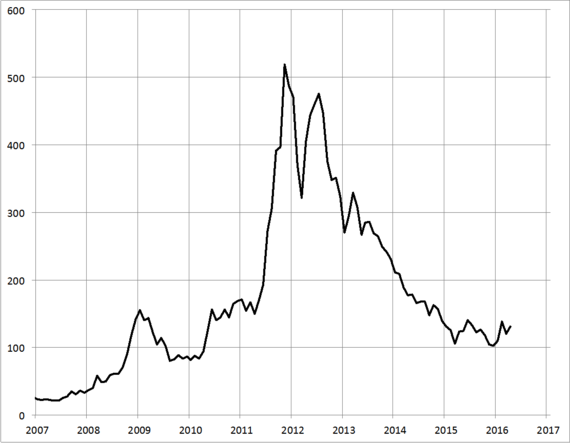 Returning to the dollar, when writing about whether China's RMB could threaten the reserve status of the dollar in an earlier post, we highlighted the disruptive forces that allowed the dollar to compete internationally with the British pound a century ago. Between 1914 and 1929, the newly established U.S. Federal Reserve helped promote the rapid expansion of U.S. financial markets, including short-term instruments (bankers' acceptances) where foreign investors could park their holdings of U.S. dollars and foreign borrowers could raise funds. At virtually the same time, World War I forced the United Kingdom off the gold standard for a decade. By contrast, the United States was able to maintain this commitment.

Could a President Trump be the disruptive force that pushes the dollar to the sidelines and opens the door to the RMB as an eventual substitute for the world's reserve currency? To be fair, candidate Trump backed away from his recent comments just a few days later, calling U.S. debt "sacrosanct." But his utterances about debt restructuring and negotiation--against the background of a possible replay of recent Congressional budget and debt impasses--chip away at the once-unquestioned commitment of the U.S. Treasury to pay in full and on time. Put differently, because of what candidate Trump said, the most important safe asset out there is a tiny bit less safe today than it was a few weeks ago. If, in coming years, a continuation of this erosion leads global investors to doubt the "full faith and credit" of the U.S. government, it would not only squander the exorbitant privilege, but would provide fodder for another financial crisis.