After the GOP debate broadcast on Fox News on Thursday, August 6, 2015, I polled my legacy contact list for their opinion on who won. My poll is tiny, informal, nonrandomized, unscientific, and not representative of the general population. The respondents are males, mostly aged 25-50 (a few are older, up to age 86) and work in the financial industry. I excluded myself and my daily correspondents from the poll to avoid influencing the results with my personal opinions. The debate has been well covered by the media, but I'd like to share some of my personal comments.

Presented in order of the most poll votes, the debaters included businessman Donald Trump, 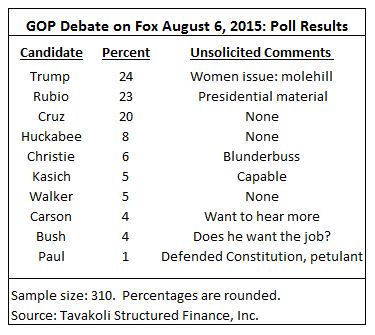 Who Really Won the Debate?

The media reported extensively on the GOP debate, and the media is still debating who won. Citizens of the USA won, because voters from both parties are taking an interest in national politics in a way that I haven't seen since the Vietnam War.

Those of you who read my last post, "Wall Street Tale of Sex, Suicides, and Skullduggery," know I have experience working with aggressive men. At the start of the debate, Megyn Kelly brought up some unflattering comments that Mr. Trump made about a few women, and Kelly said some might feel this is part of a "war on women." Really? It seems to me that people who categorize brash remarks as "war" have no sense of proportion.

The media doubled down after the debate. Donald Trump made a comment that was open to misinterpretation, and the media jumped on it. I listened to Trump's conversation with Don Lemon wherein he said host Megyn Kelly was bleeding from her "eyes" and "wherever," and I took it to mean he was implying her blood pressure was causing her head to explode--as in the B-movie Scanners. Trump also said Chris Wallace had "blood pouring out of his eyes, too." Yet the media attributed words to Trump that he never actually said, even after Trump clarified that when he said "wherever," he meant nose. Many in the media continued to hit below the belt.

I've had some experience with actual war on women. (See: "Fundamentalist Islam and the Roots of Terrorism.") In Iran, men brutalized women about their clothing. Men took away women's rights to appear in public, play public sports, and participate in many areas of public life. As for women controlling their own bodies, a woman can be stoned to death for adultery. The marriage age was lowered to nine for girls, then raised to thirteen, and now there is a proposal to lower the age to nine again. Moreover, there is a proposal to allow men to adopt girls, and as their "father," they can give consent for their adopted daughter to marry them; it is a pedophiles dream. That is my idea of a war on women. Yet I have heard no criticism of President Obama for doing an Iran Deal with men who wage physical war on women.

Trump is the only candidate actively pushing policies to keep women safe. He's talking about fighting crime in general. He also raised the topic of illegal immigration and, in particular, crimes against women. He claimed the Mexican government sends criminals to the USA. I would like to know more about the basis for that claim, but whether or not the Mexican government is actively complicit, crime is one of Mexico's exports. The greater Chicago area has a vibrant legal Hispanic community of around two million people with average household income over $60K. Trumps views are shared by my Hispanic friends who are here legally.

On July 1, 32-year-old Kathryn Steinle was walking with her father on San Francisco's Pier 14 when she was shot in the chest. The alleged shooter was an illegal immigrant from Mexico who was on probation. Her last words to her father were: "Dad, help me, help me."

The following week, Joaquín "El Chapo" Guzman, Chicago's Public Enemy Number One, escaped for the second time from a Mexican maximum security prison. According to retired Chicago detective Art Bilek, the Sinaloan drug cartel leader is responsible for around 80% of Chicago's illegal narcotics.

An illegal immigrant from Mexico and alleged serial criminal was one of two men who allegedly tortured and raped Marilyn Pharis after breaking into her home in Sacramento, California on July 24.

In Ohio's Lake County, an illegal immigrant from Mexico allegedly murdered Margaret Kostelnik, attempted to rape a 14-year-old girl, shot another woman in the presence of her children, pointed a rifle at a boy, and shot at deputies before he surrendered. Yet weeks earlier, he was found without documents during a routine traffic stop; border patrol agents told the sheriff's office to let the man go.

Trump recently published his position on immigration reform, and it is a thoughtful piece that covers topics from H-1B visas enabling foreigners to snap up Silicon Valley jobs to a pause in immigration until unemployed legal immigrants can be better absorbed into the job force.

Whether or not you agree with Trump, at a minimum his participation is forcing other candidates to clarify their positions on illegal immigration, and other issues. The media continually dismisses Trump, but whenever we hear more from Trump, we hear more from the other candidates, too. Candidates have to respond with their own positions on issues, and that pressure has made this election cycle worth watching.