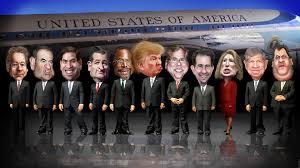 Is Donald Trump more destructive than Senator Joseph McCarthy? On the one hand, Trump doesn't yet wield actual power. From his perch in the Senate, McCarthy destroyed hundreds of lives in the early 1950s through his Red Scare witch hunt, along with his lesser known anti-gay crusade, and turned our culture into one defined by fear and paranoia. On the other hand, imagine if Trump actually, somehow, became president? That aside, what Trump is doing right now--with his racist lies and his racist "policy" suggestions--is destructive enough. It took one brave man, Joseph N. Welch, to finally puncture Joe McCarthy by calling him out during a 1954 congressional hearing broadcast live on network television:

"You've done enough. Have you no sense of decency, sir? At long last?"

The video is worth watching. In fifteen seconds, Welch strips away all the bluster, and reveals McCarthy for what he is: a lying demagogue. My question is: when is one the real players in the Republican presidential field going to do that to the lying demagogue leading the polls for the GOP nomination right now.

Yes, John Kasich has released a terrific new ad that features a surrogate, Colonel Thomas N. Moe (U.S. Air Force retired), paraphrasing the famous words of anti-Nazi Martin Niemoller ("First they came for ..."). I give a ton of credit to Kasich, but where are the Republicans who are, you know, polling above 3 percent nationally? I'm looking at you Messrs. Carson, Rubio, Cruz, and Bush. Well, I'm not really looking at Ben Carson, who--even if he did offer something productive--probably would end up saying that "he doesn't stand behind his comments" by the next day anyway.

Some of his Republican rivals did push back on Trump's disgraceful embrace of registering American Muslims in some kind of database--he would "absolutely" do that--as well as his statement that he'd "strongly consider" shutting down mosques, and his refusal to rule out forcing Muslims to carry special identification. Jeb and Kasich hit back strongly, while Cruz and Carson also rejected the idea--although Cruz made sure to remind potential supporters that, despite this small area of disagreement, he's still "a big fan of Donald Trump's." As recently as Monday, Cruz added:

"Listen, I like Donald Trump. I'm immensely grateful to Donald Trump, because he's helped frame the central issue of this primary as, 'Who will stand up to Washington?' Well, if that's the central issue, the natural follow-up question is, OK, ' Who has stood up to Washington?' And who's stood up, not just to Democrats but to leaders in their own party, and that there is an enormous difference."

As for Rubio, he didn't even mention Trump's name in addressing the aforementioned remarks on Muslims, saying only:

"It's not about closing down mosques. It's about closing down anyplace--whether it's a cafe, a diner, an internet site--anyplace where radicals are being inspired. ... Whatever facility is being used--it's not just a mosque--any facility that's being used to radicalize and inspire attacks against the United States, should be a place that we look at."

Wow, Marco. Talk about a profile in courage.

But Trump has crossed the line on countless other occasions as well. Right from the start, he has engaged in naked, open racial bigotry of a kind not employed by a major presidential candidate since George Wallace. Lee Atwater--the man behind the infamous Willie Horton ad that played on white fear of black criminals during George H.W. Bush's successful 1988 White House bid--once explained the evolution of right-wing race-baiting (note: epithets follow, but I won't sugar-coat the words that hate-peddlers employ):

You start out in 1954 by saying, "Nigger, nigger, nigger." By 1968 you can't say "nigger"--that hurts you, backfires. So you say stuff like, uh, forced busing, states' rights, and all that stuff, and you're getting so abstract. Now, you're talking about cutting taxes, and all these things you're talking about are totally economic things and a byproduct of them is, blacks get hurt worse than whites.... "We want to cut this," is much more abstract than even the busing thing, uh, and a hell of a lot more abstract than "Nigger, nigger."

Donald Trump now shouts about Mexican rapists coming across our Southern border, tweets absolutely false numbers about blacks murdering whites--numbers generated by a neo-Nazi website for crying out loud--and expresses approval when his white supporters assault a Black Lives Matter protester at one of his rallies. Sounds a hell of a lot like 1954 to me.

Rep. Keith Ellison (D-MN), the first Muslim member of Congress, characterized Trump as a "prolific hater," and--focusing on the rhetoric aimed at Muslims in America--added:

He's whipping up hatred to scapegoat a minority religious group, which has some very dangerous historic precedents ... it's classic demagoguery, and you know, he's going to get somebody hurt.

[snip]When leaders who have a national platform whip up hate and hysteria against a particular group -- particularly a religious group, a minority religious group that is not popular -- invariably ... the people who are mentally unstable or motivated by hate come out of the woodwork .... [Trump's] capitalizing on people's fears, pandering to it, so that's what I mean by he could get people hurt.

A few on the right, including the lowest polling presidential candidate in the field at 0.0 percent (Jim Gilmore), have begun to use the word "fascist" to characterize Trump. But that's far from good enough. When will the Republican party as a whole reject this man, reject his lies, his cynicism, and his hate? That they have not yet done so stands as a mark of their immorality. The next Republican presidential debate takes place on December 15. Whatever they say between now and then, whatever ads they may release, the leading Republicans not named Trump will face a real test that night, appropriately in Las Vegas.

Do they have the moral courage to risk taking on Donald Trump live in front of a Republican audience? Will they do more than criticize an absurdly unconstitutional proposal (and remember, Rubio couldn't even do that)? Will one of them finally stand up and condemn Trump as powerfully as Joseph Welch did Senator McCarthy?

Cross-posted at Daily Kos. Links are at original.