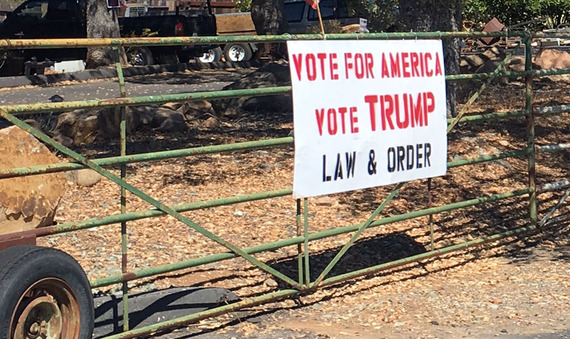 Say all you want about Donald Trump's bankruptcies or shady business dealings, his women or his lack of a plan. It misses the point. Donald Trump is not talking to you. And the people he's talking to are not listening to you.

I am a product of the cities and cultures that "mainstream media" is talking to; the coastal population centers. I grew up in the San Francisco Bay Area. My father taught at San Jose State. Most of my adult life has been spent in the Bay Area, mostly Marin County, Pasadena and Napa. When I travel for business, it is to Los Angeles or New York.

Three years ago I became enchanted with and bought a house, a Victorian from the 1880s, in Mokelumne Hill, CA., a small town in California's largely rural Gold Country, in the foothills of the Sierra Nevadas. With buildings still well preserved from the Gold Rush, Mokelumne Hill has the look and feel of an art colony. So it has attracted a collection of interesting types from the Bay Area.

But it is surrounded by ranchers, many of them the fourth or fifth generation in the area. The county, Calaveras County, is economically depressed. Once supported by the mining and timber industries, there is little keeping it going today. Mining dried up. The timber industry took a few hard blows from the environmental regulations coming out of Sacramento and never recovered.

It's not easy to make a living here. Even when mining and timber were alive, it was hard physical work. Agriculture here means working a few miracles to get a crop out of rocky mountain soil (this is not the fertile San Joaquin Valley). Grazing cattle used to be a viable option until the drought tipped the economic scale further. Today if you are young and on the ball, you leave Calaveras and go to Chico, Sacramento or Lodi and get a job. Or join the military.

Many of the roads to the ranches are still gravel roads. One of them scares the hell out of me as you approach the top, and I've driven in everything from downtown Rome to the mountains of East Timor. It's not wide enough for two cars, it's eroding, and there's no railing. This in a state that is the fifth largest economy in the world.

And we're in solid Trump territory. Drive four blocks out of Mokelumne Hill and you don't just see Donald Trump bumper stickers. You see enormous handmade posters hung on wire fences. Last week, getting in my car at Lowe's in Jackson, the next town over, I looked at the bumper stickers of the cars around me. On three cars, I saw "Liberalism is a mental disorder," "Get US out! of the United Nations", "Hillary for Prison 2016," "Trump for President 2016," "Trump in 2016: Up Yours Hillary," "2016 Ted Cruz." And a Confederate Flag.

Fox News is the news source, on all day in some homes. Now that the Internet is becoming more ubiquitous, even on the ranches, it is supplemented by the conservative web sites and YouTube conspiracy videos. Facebook posts from people I know run into the zone where Hillary is a communist who has secretly converted to Islam and this is the communist/Muslim takeover. Surprisingly, nobody argues with it.

Racism? You bet. Certainly it's not everyone, and there is really no way to know how deep it runs. But then you see a bumper sticker that says "Hey n----r, didn't anyone tell you it's a White House?" They spelled it out. And they weren't ashamed of driving down the street with that on the back of their car. You hear comments over the dinner table that you wouldn't hear anywhere else.

Unless they've been in the military, most of the people here likely don't even know a black person. I know I have only seen one or two black people in this area in three years. But they've heard stories. They've seen Ferguson on TV.

We have a winery here that has $5 glasses on Friday. The community comes out and sits around large tables, listening to local musicians and enjoying each other's company. Last Friday a man at our table who may have had too much to drink said to no one, "Let's get Trump in here and get rid of all these f---king Mexicans." Never mind that there were no Mexicans in the winery. There aren't even any Mexicans in our town. They do work in the vineyards in Shenandoah Valley, in Amador County, 40 minutes away, not only working in but managing the vineyards. The one Mexican family I know here owns Borjón Winery and makes some of the finest Zinfandels and Barberas you'll run across in California.

A few weeks ago I was told a joke by a local resident about Jews that literally made me feel like my blood was draining to my feet. He later laughed and said he was "baiting me." But where do you hear that joke? Where do you even have any experience with Jewish people around here? I mean, I'm sure there are some. I just can't think of any. The same person once asked me how I was sure the Holocaust happened.

For three years, I have tried to get my wits around it. What makes it difficult is that these people are not the stupid people you expect them to be. Some of them are actually very bright. And decent people. Very decent. Decent in a small-town, take-care-of-each-other way.

In other ways, the people here are onto something. They are self-reliant. There are a few meth heads and now and then you see a homeless person coming around the food bank, but the bulk of the population of the area are either retired from a job that involved getting up in the morning and working hard, or they are getting up in the morning and working hard. There's not a lot of money around here, so they aren't reckless with it. They seem to pretty much own their homes outright or they have their mortgages covered. There were no waves of foreclosures here in 2008. The local banks weren't even doing subprime mortgages. If you can't afford it, you don't buy it.

You can pretty much operate on your word around here. They still have their hands on things many in the cities seem to have lost our grasp of somewhere along the way.

Before you get too arrogant, or as some of my liberal friends say, "sit over here and mock them," consider a few things.

I have been a Californian since I was five years old. I have never paid the slightest bit of attention to the people along Highway 5 in my State, the rural areas. As part of the coastal population centers, why would I? We outnumber them and dominate the State's politics. If salmon habitats are being destroyed by the timber industry, we act in good conscience and pass legislation to stop it -- even if it means crippling an entire industry. We don't have to care what effect it has on the livelihoods of the people on the other side of our State. Nothing to replace the jobs? Not our problem.

If you live in the coastal, liberal zones of California, the chances are good that, like me, you have no idea of the depths of racism here in our own State. Call it deplorable if you want. You've probably forgotten or you don't know that if you go back a few generations in your own family you will find the same.

Racism and anti-Semitism are learned at a young age from dinner table conversations. For many, it is counter-acted as we grow up, by education, our social experiences in school, and other sources of information that give us wider exposure to the world than our parents had. Eventually it becomes unpopular and even sounds stupid.

What counteracts it here? The elementary and high schools here are white. The college experience is nearly non-existent. Along the coast of California, including the Bay Area and Los Angeles, there are more than 60 colleges and universities. In this area of Northern California -- North of the Bay Area, and the Central Valley -- there are five. Two of them are small private Christian colleges. The one "big" university, the University of the Pacific, has somewhere around 3800 undergraduates. By comparison, the UC campuses have somewhere around 30-40,000 undergrads each. Where are the good professors, the ones who challenge your thinking, going to go?

The media, looking to ratchet up their numbers instead of producing programs that expose viewers here to any kind of a widening world, is happy to feed them Pawn Stars and My 600 Pound Life.

On a practical level, the interests of the rural areas are under-represented in our State government. Republican or Democrat, the candidates need, and speak to, the population centers on the Coast, the areas where elections are made. The San Francisco Bay Area and Metropolitan Los Angeles have more than 600 representatives in our State Assembly. The 18 counties that make up Northern California and the Gold Country have five. When you add these to the agriculturally rich Sacramento and San Joaquin Valleys, and the rest of the agricultural Central Valley, it rises to 102. Still one against six. Their interests, their future, their complaints, can be steamrolled. And we barely notice.

In other moments of history and today in other parts of the world, pissed off groups who feel excluded, who feel that their government is working against their interests, pick up guns and you have a revolution on your hands. They are not picking up guns here (though believe me, they have them). They are going to the election booth and putting a checkmark next to Donald Trump. They're not doing it because they even feel he is qualified to run the country (they are HOPING he can hire people who are), but because it is their way of saying "Up yours, Hillary." And "Up yours, liberals."

This is not a mindset that is unique to our counties. It only starts here, when you move away from the blue coast and start to get into rural, red territory. How far, and how deep, it goes, we are about to find out.

This election is not a measure of Donald Trump's worth against Hillary's. It's not even a measure of who runs the best campaign or who most effectively discredits the other. It is a measure of how many people there are in this country who, in our arrogance, we simply have not listened to.