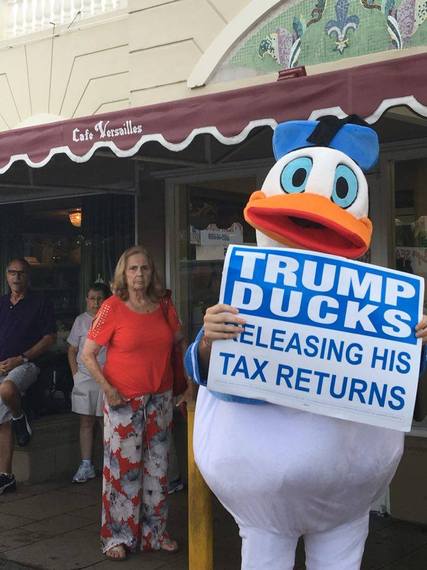 A protester mocks Donald Trump for "ducking" the question of sharing his taxes during a recent press conference by Miami voters denouncing Trump's history with the Castro regime. Photo credit: Zulema Rodriguez

Weeks before the presidential election, Donald Trump's bid for the White House could be unraveling before our eyes. Revelation upon revelation continue to show Trump as a sketchy candidate whose candidacy we as Americans must question.

Florida, as always, is one of the key states to decide who will be the next president, and as we know our state has its share of Cuban American voters who have higher than average voter-turnout rates when compared with the Latino population as a whole. Cuban American voters are also more concerned by tumultuous relationship between the U.S. and Cuba. Given that, one has to wonder about a presidential candidate who travels the state talking tough against Cuba, only to have him and his companies outed for reportedly violating the U.S. trade embargo with Cuba. In a 2,000 word story, Newsweek described how Trump sent representatives to Cuba in 1998 to explore the building of a casino if the embargo were ever lifted. It is estimated that Trump paid a consulting firm close to $69,000 to arrange the trip. In a speech that same year, Trump gave a speech in Miami in which he talked called Cuba leader Fidel Castro a "murderer" and stood fast that the embargo had to remain. He never mentioned his business foray into Cuba.

Now, almost two decades later, Trump is appealing to the same conservative Cuban-American crowd that supports an embargo against Cuba, but his promises to maintain a ban against the island nation ring hollow after his hypocrisy has been exposed.

I've grown up in this community and have listened to the older hard line conservative Cubans who dominated Miami politics for so long rail against a supposed communist influence within the Democratic Party. It is ironic and revealing that they are now backing a candidate who tried to conduct business in direct violation of U.S. law with the very regime they claim to oppose. Their hypocrisy is plain for all to see.

What is also clear is that Trump is a man who thinks he can play by his own rules. A bombshell story by the New York Times has revealed that in 1995, Trump declared a $916 million dollar loss in his income tax returns, a tax deduction so substantial that it allowed him to not pay taxes for the next 18 years. When pressed on this issue, Trump's campaign not only did not deny the charges but Trump himself claimed that dodging taxes in this manner makes him smart.

It's mind boggling that a candidate for President would gloat about dodging taxes by exploiting a system that obviously favors the wealthiest of filers. It is so out of touch with the lives of regular hardworking Americans who play by the rules and contribute by paying their fair share.

I'm particularly vexed because Trump started his presidential campaign by attacking undocumented immigrants, like my parents, calling them thieves, killers and rapists. His campaign rose to political prominence by claiming that immigrants come here and exploit welfare services while paying nothing in the form of taxes to the government. 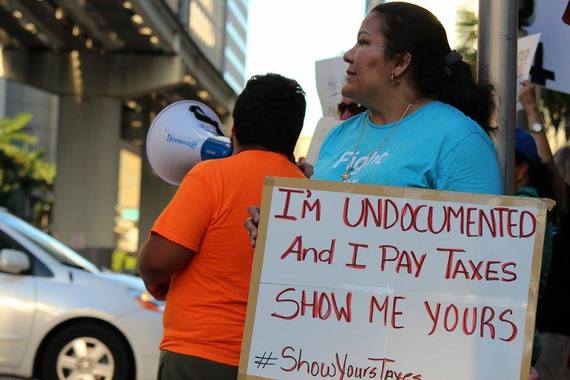 Donald Trump has had many chances to make America great through his contributions and has failed to step up to the plate time and time again. His sketchy past reveals him as a conman who does not deserve to be anywhere close to the presidency or even public service for that matter.