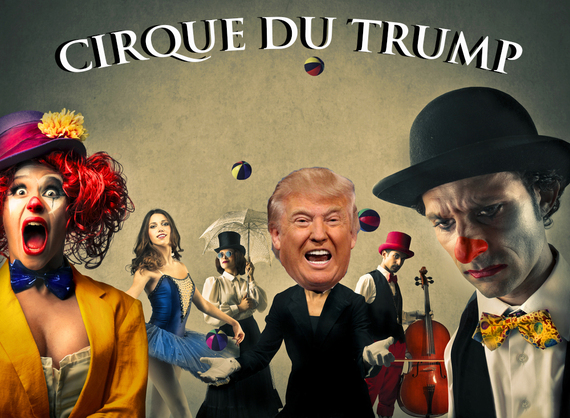 Imagine if you threw a very exclusive party, but all someone had to do to crash it was drive up in a stretch limo. That's the case with Donald Trump and the Grand Old Party. Other than being an American citizen over 35 years of age and having a personal fortune in the billions of dollars (fewer billions than he would have you believe), Trump has made a mockery of the time-honored, unwritten rule that in order to run for President, you have to have a certain level of political and public service experience.

Trump's candidacy is neither Practical nor Republican. The Donald is simply a master of self-promotion, boasting that he can do a better job of rebranding America to "make it great again." But the only brand he's endorsing is his own and his shoot from the hip extremism is simply part of this special edition of Celebrity Apprentice. The truth is Trump is applying for a job where most Americans would say "You're Fired!" before the show even begins.

As Trump transports his political circus around the country, I see three intersecting rings of thought.

First, the ultimate irony (and insult) is that unlike every other Republican who has declared his or her candidacy, Donald Trump doesn't even want to be President. He would never dream of dealing with the structure, responsibilities, and demands of the Oval Office. While initially, his campaign was an entertaining distraction to politics as usual; now, his presence in the national conversation is a threat to the entire party, through guilt by association.

At this point, I believe Trump's outlandish comments are really a pattern of self-immolation and a desire to extricate himself from the race. They show that in his heart, he's really not a serious candidate. Running as an independent, however, is a different matter, as it won't require him to play by the same rules (such as filing full financial disclosures) as the party candidates, and he can remain a loose cannon. But in doing that, he would almost guarantee a Democratic victory in 2016 and burn every bridge to the Republican Party. It's hard to imagine that Trump wants to be a pariah.

Second, many political analysts have pointed out that Trump's lead in the early polls is largely a reflection of media attention and name recognition, including the constant promotion he receives on conservative talk radio. Yet there is another key factor at play here that also applies to Democratic candidate Bernie Sanders (although lumping an experienced politician, even a socialist, with Trump, is a stretch). Both men have clearly struck a nerve, an important nerve, tapping into the disillusionment and anger many citizens are feeling as the American Dream they thought they were getting is slipping away.

On the Democratic side, the anger that fuels Sanders' grassroots movement is represented by the unfairness of income inequality and the influence of big business and special interests. On the Republican side, the anger comes from social issues getting out of control and the threat of unchecked immigration. For some conservative supporters, Trump says things out loud they may think, but can only say in private, such as his incendiary comments on immigration. They're frustrated by the party's continual infighting and attracted to someone who is seen as standing up to the liberal media and not repeating the same old recycled comments from their leaders. And both parties are feeling the pushback from a public tired of a government stuck in gridlock and worried about an economy that despite improving numbers isn't putting more money into their pockets.

Third, it's critical to recognize that Trump is not just some crazy who came out of nowhere. In Trump Is the Poison His Party Concocted, Timothy Egan of the New York Times points out that Trump is the product of a long-term pattern of behavior and over time, the party has created its own monster.

"Trump is a byproduct of all the toxic elements Republicans have thrown into their brew over the last decade or so -- from birtherism to race-based hatred of immigrants, from nihilists who shut down government to elected officials who shout 'You lie!' at their commander in chief."

"It was fine when all this crossing-of-the-line was directed at President Obama or other Democrats. But now that the ugliness is intramural, Trump has forced party leaders to decry something they have not only tolerated, but encouraged."

With the FOX presidential debates beginning this week, serious candidates need to focus on real issues and policy, rather than engage in petty politics and name-calling with a caricature of a presidential aspirant, who proudly boasts he's not prepping for the event and will just "wing it." These debates are high-stakes card games and pragmatic Republicans need to stand up and firmly bid No Trump before he tarnishes the GOP brand even further. While Trump can't be ignored, he can be exposed.

When The Donald threw his hair into the ring, a GOP circus came to town. Soon, it will be time to send home the clown.