An Arizona woman has been arrested on bestiality charges after allegedly trying to arrange sex with a horse via Craigslist.

The woman, who's described as transgender and who the police report is legally known as Donald Waelde, 22, posted this ad on the Missed Connections section of Phoenix Craigslist on April 8:

"I am 22 years old and I want to play with a male Horse. Simple as that. If you have access to a Male horse, and can allow me access to a male horse, then contact me please ;) I will do something in return. 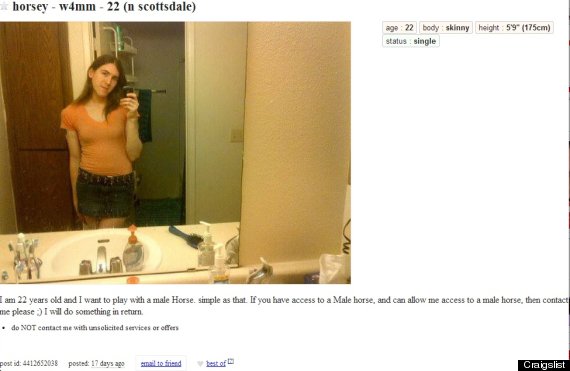 Waelde's ad caught the eye of another Craigslist visitor who reported it to the Maricopa County Sheriff's Office, Phoenix New Times reports.

Undercover deputies contacted Waelde. During a subsequent conversation, she allegedly stated she wanted to perform oral sex on the horse and agreed to meet the undercover detective, the paper reports.

The meeting took place on Tuesday and deputies brought along a horse from the sheriff's Mounted Posse as a prop.

During the meeting, Waelde allegedly admitted to placing the ad and her sexual intentions with the animal.

She was arrested and charged with conspiracy to commit bestiality.

A search warrant of her home was also executed, according to AZ Central.com.

Maricopa County Sheriff Joe Arpaio said Waelde's arrest was the fourth case since 2011, where an alleged animal sex abuser was caught on Craigslist.

"Cases like these are tough to talk about, but we will always go after those who commit sex acts with animals," Maricopa County Sheriff Joe Arpaio told KTAR.com.