It was in the first days of January 2013 that we found that my wife could have leukemia. Our daughter was 3 years old, and my wife, Mai, was 15 weeks pregnant for the second time. For about a month she couldn't get rid of her cough -- something that didn't really worry us. We took a lot of precaution with medication for cough because of the pregnancy, and we were just writing everything off on pregnancy being hard on the immune system and the fact that we couldn't hit the cough with harder drugs.

It was a routine blood test that they usually do during pregnancy that showed that something could be wrong. She went to that appointment alone, and when I came back after work she broke down in tears: "We could be losing the baby."

We had no idea what leukemia is, or what even bone marrow is, for that matter, along with neutrophils and leukocytes, and many other terms we would learn in the weeks, months and years to come. What the disease does is essentially kill the patient's immune system. Any small scratch can get infected, and any infection could be fatal.

The confirmation that it was, in fact, leukemia, came a few days later, in the maternity ward of the hospital.

We were devastated. Not only this was a threat to pregnancy, but it was a threat to her life. Leukemia, it turns out, is a nasty blood cancer. Cancer, at 32 years old, in an otherwise healthy, lively, happy woman with absolutely no previous health problems.

We had to put an end to the pregnancy within two days of receiving the diagnosis, in order to start intensive chemo as soon as possible. And although my wife was in remission after about ten months of it, the cancer came back this past May. Again, we were devastated beyond words. We really hoped the cancer chapter was over. Mai grew back her hair, started working again and we were thinking about what to do on vacation this year. 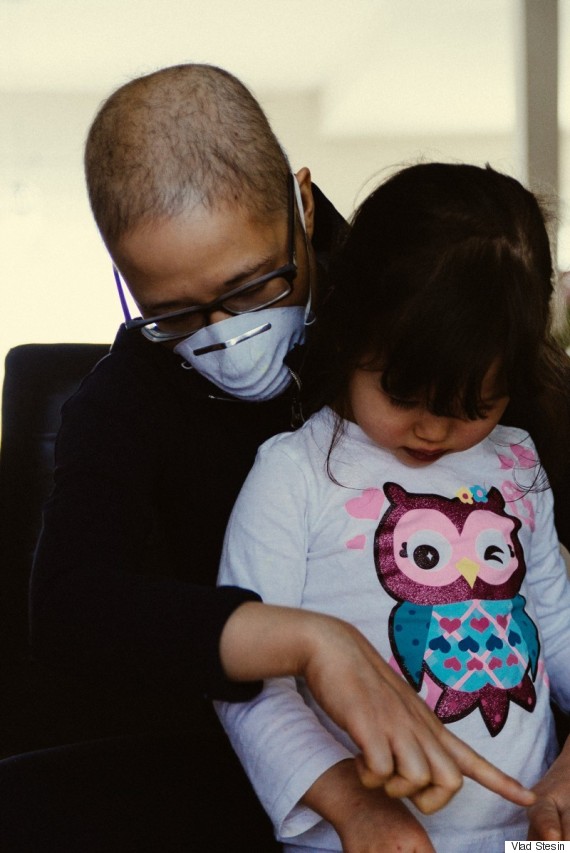 But this time around the doctors made it clear that a cure is only possible by going through a bone marrow transplant, or as we affectionately call it, BMT. Just chemo wasn't going to cut it.

That's when the real learning started.

Bone marrow is the birth place of blood cells in your body, and it lives in the bones. It is entirely unrelated to the spinal cord (I know you would assume that -- we did). Getting a transplant involves the use of even harder-hitting chemo and radiation in order to kill her own bone marrow, and another person's stem cells will be injected in order to gradually replace the "original" ones. The difficulty comes from the fact that the donor in question needs to be compatible. The science behind compatibility is complicated, and the best option for a donor, by far, is a sibling.

"Although Mai has an older brother, when he was tested for compatibility it was found out that he isn't compatible."


Unfortunately, a sibling has only a 25-30 percent chance to be compatible. Multiple doctors and nurses told us anecdotes from their experience -- there are multiple cases of large families with three to four siblings or more where not even one was compatible.

The curious thing is that 20 or 30 years ago there were many larger families, but the science behind bone marrow transplants simply wasn't there. Today, the science is here but families are typically much, much smaller. You need to rely on others.

The next best option is to find a donor who is not related to the family, by tapping into a worldwide network of donors. Amazingly, such a thing actually exists. Most developed countries operate bone marrow donor registries -- they are databases that allow doctors to look up compatible people based on the DNA. A patient in need of a BMT could find a donor in a country a world apart, and there are procedures in place that allow that to happen. A nurse flies to, say, France, where the stem cells are typically harvested in the donor's blood through a simple, almost painless procedure (the donor regenerates these cells within days, hence not losing anything).

The nurse then puts the little baggie in a basket and brings that to the patient's country overnight. The stuff is not even on ice. These stem cells are then injected and the patient gets an actual, real chance at beating leukemia.

Although the international network has reached over 24 million people, there was no match for Mai amongst those who signed up to be donors. Not even one. The difficulty comes from the fact that, although born in Canada, Mai is of Vietnamese origin. People of Asian descent are severely under-represented in all registries, and there is simply no public registry in Vietnam.

"Again, we were devastated. Doctors told us that we have two months to find a donor. And we tried."


To borrow the words from Michael Lewis, in theory, "the world is newly configured" to allow this sort of thing to happen. Facebook allowed us to reach over a million people through likes, shares, ads and such. The message was for Asians and people of Vietnamese ethnicity specifically to sign up to become a donor. The person needs to be 18 to 35 years old (or about that depending on the country of registry). All it takes is filling out a form. You then receive a kit of Q-Tips to swab the inside of your cheeks. Send that back for free. All of it is free. That's it. If you can save someone's life, you get a call. Even at that, there's a small percentage of people registered ever get a call in their life.

The other option to receive a transplant is to find a compatible umbilical cord. There are pros and cons, but still, it's also an option. Women who give birth can sometimes donate their umbilical cord to the same registries that operate bone marrow donor databases. The cords are frozen and accessible to the worldwide registry network.

Because of all the social media activity, the story was picked up by local, national and international media that have written about this. Mai was on the cover page of two newspapers here in Montreal. Her latest stint at the hospital included dozens of interviews. Media companies helped out with ads running on TV, radio, Internet, in doctor clinics via CCTV and even on electronic billboards next to highways.

Although thousands of people signed up as a result of our efforts, after two months we didn't find a donor.

But despite that, there was a compatible umbilical cord that turned up somewhere. It was shipped to Montreal, thawed, and the stem cells from it were injected into my wife's blood. They call this Day Zero. It's rebirth. It will give her -- us -- another chance.

Some woman somewhere in the world was giving birth and signed a form and donated her umbilical cord, making it available through the international donor registry. If she didn't do that, the umbilical cord would've been thrown in the trash. Instead, she gave life another time, without even knowing it since this is entirely confidential. The whole thing really sounds like something out of a science fiction novel.

The incredible thing is that we were far from being alone in our search for a donor.

Mai is lucky that she is petite. Fun-sized. If she wasn't, the umbilical cord blood would not even be a viable option. In fact, over 10,000 people just of Asian descent are currently waiting for a donor. Countless others of other ethnicities are also trying to find a match. The reality is that anyone who is non-Caucasian will likely not be able to find a donor. There are many campaigns being run for them. Some have received quite a bit of coverage, such as Amit Gupta's. He ended up finding a donor, against all odds.

Others are still searching, while time is running out. Such as Ryan. Or Morrow. Or Chao Wei. Or Leni. It's even more difficult to find a donor if you're of mixed ethnicity, such as the little Baylor.

It's not even a question of money. People who are 18 to 35 years of age can sign up in their country's registry to potentially save someone's life by giving their stem cells (in most cases, a painless procedure similar to giving blood).

All you need to do is sign up, return the swabbing kit (for free) and hope to get a call to save a life one day.
Here are some registries:
US -- BeTheMatch.org
Canada -- OneMatch.ca and Hema-Quebec for Quebec
UK -- AnthonyNolan.org
Australia -- ABMDR.org.au
For others, please look up your country at BMDW.org

It's a donor that went through the procedure that once said that this is just like giving an organ without losing it. Apparently that's exactly what it feels like. It's easy, free and amazing. If you do get called, the person in need is just like you, sharing your DNA. The stem cells harvested in the blood regenerate within days. You lose nothing.

When this happened, we didn't know anything about this. But now you do. The world is not split into people sick and people not sick. It's split into people already sick, and those not sick yet. Anyone can get hit with this. It could be a family member, a friend. Please sign up to get a chance at becoming donor.

If you're an expecting mother, please consider donating your umbilical cord. There's nothing to lose. It could save a life such as Mai's.

It's been now more than a year since Mai's stem cell transplant and this article was first published on Medium. She's doing very well, and has started working again. Some people mentioned earlier in this post didn't make it, and others have replaced them, waiting for their stem cell match. Please sign up to your country's donation registry!

Voting Made Easy
Register to vote and apply for an absentee ballot today
Register now
More:
healthy livingpower of humanity