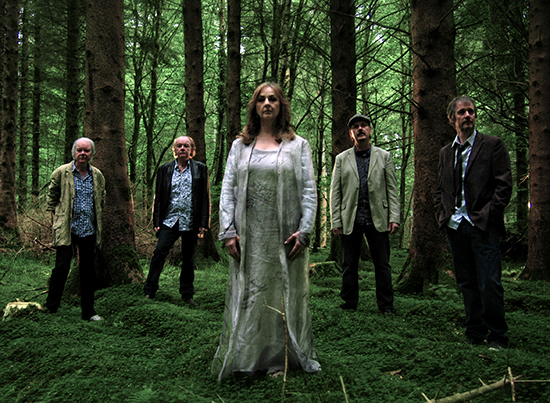 There's no bigger news in Celtic music than the first new studio album by Clannad in 15 years. The Grammy-winning family band from Donegal began the trend of backing lush Gaelic vocal harmonies with shimmering synth pads back in the 1980s. They rode that formula to major success on the charts, to collaborations with Bono, to TV themes such as Harry's Game and Robin of Sherwood, and finally to the GRAMMYs, where they won in the New Age category for 1998's Landmarks. After that triumph, the band took a break, which ended up lasting over a decade. A reunion tour in 2011 led to a live album, and finally to this new studio recording, Nádúr, which harkens back to the days before the synths took such a prominent role in their music. Those who fondly remember the band's earlier work will enjoy these eclectic arrangements, which blend Irish music with strong jazz and pop elements, featuring fat fretless bass, gentle acoustic guitar solos, brisk mandola, fluid whistle, and crisp harp. The sound ranges from smooth jazz and (yes) new age to a tougher rock edge that reminds me of their Scottish contemporaries, Capercaillie. There are two traditional Gaelic songs (one of them a waulking song from Scotland) and a beautiful new slow air. Ten original songs make up the rest of the disc, some in English, some in Irish, and some bilingual, exploring themes important to both ancient and modern Ireland -- from the myth of Cú Chulainn to the experience of emigration. As always, a big plus is Moya Brennan's voice: she pioneered a misty, mystical sound that has attracted many other singers, including her younger sister Enya. But Moya is still one of its strongest practitioners, and she shines on Nádúr. The album will be available digitally September 20, and as a CD September 24; here's a trailer from the band:

We'll move on to Galicia, a northwestern region of Spain named for its ancient Celtic inhabitants. Galician Celtic music centers on the bagpipe, and the region's best known piper is surely Carlos Nuñez, who has released the retrospective double CD Discover. Nuñez is also an early-music recorder virtuoso and a great whistle-player to boot. He's a musical butterfly who flits among styles and traditions, bringing his versatility and pure musicality to many contexts. This album features symphonic music and film music, Irish, Cuban, and Brazilian music, and good old pop music. Nuñez backs singers as diverse as Jackson Browne, Mike Scott, Sinead O'Connor, and Montserrat Caballé. He plays with Basque accordionist Kepa Junkera, Cuban guitarist Compay Segundo, Irish bagpiper Paddy Keenan, Japanese pianist Ryuichi Sakamoto, Spanish Viola da Gamba player Jordi Savall, and Breton guitarist Dan Ar Braz. You want Linda Ronstadt, Los Lobos and the Chieftains all playing together, plus Galician bagpipe? Nuñez made that happen. But despite its eclecticism, the album is cohesive; it sounds like the soul and vision of one person, seeking the connections between his beloved Galician music and everything else in the world. It's a big job, but he's off to a great start! 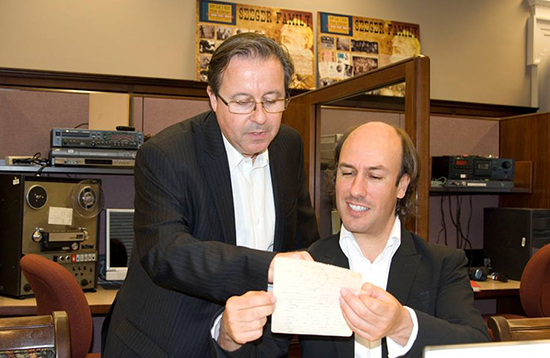 Carlos Nuñez (right) and his former English teacher, Alberto Avendaño, conducting research at the Library of Congress on the Spanish recordings made by folklorist Alan Lomax in the 1950s. Photo by Stephen Winick; used by permission.

The Murphy Beds is the first release by the New York based duo of Dublin-born Eamon O'Leary and American Jefferson Hamer. A while back I recommended another of Hamer's projects. This disc is even better; one of those simple-but-satisfying albums that show traditional folksongs in their best possible light. Too many Irish groups play the same songs we've heard since the 1970s, but these guys have selected some lovely and unusual repertoire. Their opener was learned from the Irish-language singer and ethnomusicologist Lillis O Laoire and translated into English by American folklorist Julie Henigan--you won't hear it elsewhere. Their other Irish songs have similarly unusual sources. They also sing the peaceful yet chilling piece "The Old Churchyard" from Arkansas singer Almeda Riddle and "Her Bright Smile Haunts Me Still" from the Warner Collection in the archive where I work. Even more impressive than the unusual repertoire is the delicacy of the arrangements: two tenor voices, and either two guitars or guitar and bouzouki -- it's sparse but not overly so, and by making the most of the harmony and counterpoint they come off sounding like pared-down versions of Irish groups from the 70s such as Oisín and Planxty. So their great feat turns out to be taking what's best of the classic Irish folk revival without falling into any of its clichés. The resulting album bears repeated listening from start to finish, with ten beautiful, crystalline songs. It looks like I'll be hosting a panel with Hamer and O'Leary at this year's NERFA meeting in November, where both our bands are showcasing. And hey, here's a video of them at my old radio station!

Sarah McQuaid is an excellent singer, songwriter and guitarist whose music crosses the borders among Celtic, English, and Early music. Her voice has the smoke and savor of a good single malt whiskey, and she uses it beautifully. Her debut CD, When Two Lovers Meet, was reissued a few years ago. It's a quietly powerful album of mostly traditional material that stands up there with the classics of Celtic music. On "When a Man's In Love" she reminds me of the version performed by Lisa Moscatiello with The New St. George almost twenty years ago -- and that's a ringing endorsement from me! Other songs given lovely arrangements include "The Sprig of Thyme," "When Two Lovers Meet," and "The Parting Glass." McQuaid leads several sets of tunes with accomplished DADGAD guitar playing. Guest musicians include some of the finest in Irish music, including Gerry O'Beirne on strings (who also produced and co-arranged the album), John McSherry on pipes and whistles, and Niamh Parsons on voice.

McQuaid's latest album, The Plum Tree and the Rose, finds her excelling as a songwriter. She now lives in England, and many of the songs have an English theme, but the singing and playing continues to have an Irish feel. Her original song "Hardwick's Lofty Towers" tells the tale of the prominent lady Bess of Hardwick (1521-1608), Countess of Shrewsbury, in language that would be equally at home in Irish traditional ballads or Shakespeare sonnets. It's part of a loose trilogy of songs with "In Darby Cathedral" and the title song; the former is about the place where Bess is buried, while the latter sounds like Bess musing on one of her late husbands. All three songs explore the question of the meaning of life in quiet, personal terms. Three arrangements take on Early Music: a Provencal troubadour song by Ellian du Cadenet (1160-1235), a lute song by John Dowland (1563-1626), and the catch "New Oysters New," which was published by Thomas Ravenscroft (1582-1635), who also gave us "Three Blind Mice." McQuaid's approach provides a good example of how a folk-trained vocal style can benefit such songs, turning them into accessible music without harming their delicate complexity. Her fine work, supported again by O'Beirne and a cast of musicians including Rosie Shipley (fiddle), Trevor Hutchinson (bass), and Rodd McVey (keyboards), results in a lovely album that sparkles with intelligent writing, moving music, and pristine production.

McQuaid will be on tour in the US in September. Check out the schedule and go if you can -- she's an excellent performer and always delivers the goods.