I had the wind knocked out of me last week ... by a piece of art. At La Fondation Louis Vuitton, a new Frank Gehry-designed gallery in the Bois de Boulogne, we saw Accrochage 3: Pop & Musique/Son. There were the expected Warhol, Basquiat and Gilbert & George pieces, and then a series of video installations that purported to juxtapose cumulative, complimentary or contradictory images with a driving soundtrack, but seemed like nothing more than in-your-face-image-overdose accompanied by the obligatory my-piece-is-so-high-concept-that-I-need-to-explain-it-to-you-in-detail-possibly-including-what-emotion-you-should-be-feeling. The emotion I was feeling was nothing, succeeded by irritation, succeeded by despair at the complete absence of heart. As if it wasn't hip to bare your soul in art, as if that wasn't the point of art. I felt like I was watching a bunch of male artists in a pissing contest with each other, to see who was cooler, who was abstracter. I was biting my tongue against the feminist tirade I could feel welling up.

So when we arrived in the darkened gallery where Rineke Dijkstra's The Krazyhouse was playing, I was prepared to be underwhelmed. Instead, I got knocked upside the head, sat down on the floor, so I could stay for the whole video installation and had to collect myself before going back out into the light of day. At the time, I didn't even know how long I was there. I might have guessed 15 minutes. It was 32 minutes, I now know. Technically, the piece is five successive videos of five different Liverpool teenagers, dancing to their favorite music against a white background. Artistically, it is a series of cinematic portraits, each of which shows the unique weather patterns of that individual's internal atmosphere, as they pass from nervous, to relaxed, to lost in the music, return to self-conscious, experience embarrassment and then return to their joy. One young man danced, as if he were aggressing the viewers, staring at the camera with a look that said, "don't think you can ignore me". Another was filled with the music, but completely closed in on himself, air guitar in hand, bent double, his long, lank hair veiling his face; until the music ended, and he looked at the camera, filled with contentment. Another's shyness fell away slowly and quietly, her smile kind and open. And then there were the two "pretty girls", both blondes, both dressed in their version of alluring. Of the five, they were the ones who could not let themselves go, not let themselves be transported by the music, their fear of looking silly was written on their faces, their belief that the only way they could be attractive (and, after all, wasn't that what they were best at being) was to shimmy their hips and part their lips invitingly, and then there was their boredom, as time went on and they were still alone and not getting any new attention. I imagined whole lives for each one of them.

The shock of the piece was how naked and frank the faces and bodies were. From the cold lack of emotion of the other art we'd seen, we had entered a room electrified by humanity, in all its dimensions. And this assault reduced me to tears. Because how can a person not cry (and laugh and whoop) at the wild fragility and stubborn perseverance of humanity.

I haven't even mentioned Gehry's magnificent building yet: glass and steel layered like so many insect wings, torn off a living insect and pinned back together in a new shape for their intrepid tormentor to admire. A fountain of sorts, running water streaming down shallow stone stairs into a still pool, was so mesmerizing as to almost throw me off balance. Was it the speed of the water? The rhythm of the waves? Something about the tempo and pattern rearranged the neurons in my brain. We walked back through the Jardin D'Acclimatation. I felt like a blank slate with the words Write-On-Me scrawled across it. Easeful. Open.

I wondered if I was more susceptible to the art, because I wasn't at home. I wasn't safe and coddled by the familiar. Here in Paris I am always a bit off kilter. Well, you already know about the chairs. Here almost every outing involves an advance consultation with a map. I often have shreds of paper in my pocket, with lists of streets, preceded by R or L, so I have the sequence and direction of turns to make. As if somehow knowing my place on a map will help me locate my self-self. Still discombobulated in my second language skin, I haven't had the courage to chat much with my fellow students in theatre class. Who am I through their eyes? Shy? Aloof? I am missing the mirror my friends provide, the "me" I am as seen by them. I've lost track of myself, as if I've donned a cloak of semi-invisibility, as if I'm part-spirit. I'm enjoying the feeling of passing through the world in this state of transparency, of porousness. And if this condition allows art to more easily grab me by the throat and insist I pay attention ...

Another night, I found myself alone at a play, Macbeth (The Notes), a one-man show about a director giving notes to his actors, stage manager and various techs, after a ghastly dress rehearsal of Macbeth. The conceit is that the audience is seated in the place of the actors and others, so that the whole show is played directly to us, no fourth wall. I loved it, and not just because I got to play Lady Macbeth. Okay, not exactly "play", but I was the audience member to whom all the notes pertaining to Lady M were addressed (including one whispered-in-my-ear). Of course, I immediately ascribed all sorts of there-are-no-coincidences importance to my having been picked. The universe was delivering me a personal message to not give up on theatre, to start working on the play idea I had marinating about all the different queens I had been coming across in the plays I was reading. The play went long by 40 minutes so I was late-late meeting up with my partner at the bar we'd decided on. And I was flying--the energy of the play and the personal omen delivery had an incendiary effect on my brain. I was having the most brilliant play ideas. I was the incarnation of sexuality. I was, in other words, no longer quite in touch with reality. Conditions were therefore perfect for a misunderstanding. What do you mean you don't want to dance with me? I am a creative genius. I am Lady M. I am so sexy you should want to kill a king for me. Things went downhill. I need to remember that if art grabs me by the throat, I can gently detach its fingers, and that porousness includes allowing things to pass through, not to get stuck in transit inside my psyche. Also, that cloak of semi-invisibility, it only works when people don't know you.

The same week another, less inflammatory art coincidence occurred (or not a coincidence, but in any event, a surprising alignment in the midst of the usual chaos). Near to our apartment we found a little neighbourhood bar we like, filled with French-intellectual-revolutionary types, drinking and eating assiettes de fromages et charcuteries. At home, I'm allergic to snack-meals, here, in my porous cloak of semi-invisibility, a plate of bread and cheese, wine and good conversation is the entire food pyramid in one sitting. The bar is called L'Art Brut. Brut means crude and raw; in champagne terms, it means dry. But we didn't know what the name signified. The answer, the coincidence, presented itself within days to us unbidden in the form of a New York Times review of a new exhibit of Art Brut at the Folk Art Museum in New York, which is, it turns out, a form of crude, raw or unfiltered art (not a movement, so much as "found" art--in asylums and prisons, on streets and so on--much debate on what qualifies and what doesn't). 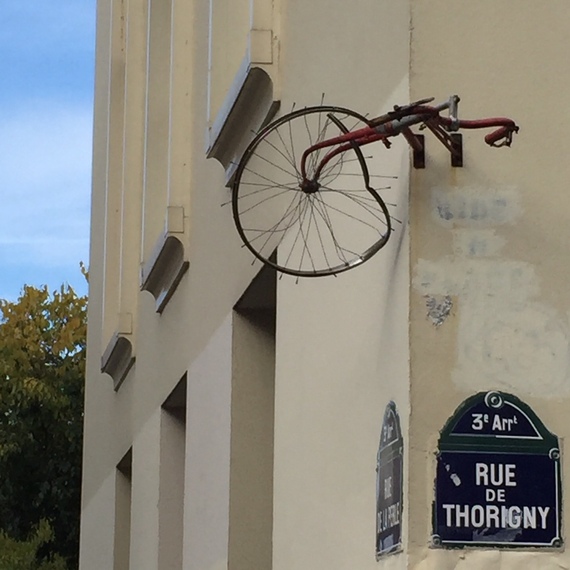 So I leave you with three chanced-upon art encounters, which may or may not be art brut, I leave that to you to define. The bent half-bike frame with one wheel, bolted high up on the corner of an old building on a Parisian street barely a Smart car wide; the wire installation of the words, Don't Be Mean, in a cobblestone pedestrian underpass in Lisbon (where we went for the weekend, because the RER goes straight to the airport from our apartment, so its just too easy not to take advantage of a bit of Europe); not to mention the very temporary installation, Six Peacocks On Lisbon Castle Walls, which doesn't have fixed hours, but is on display at the pleasure of the peacocks. 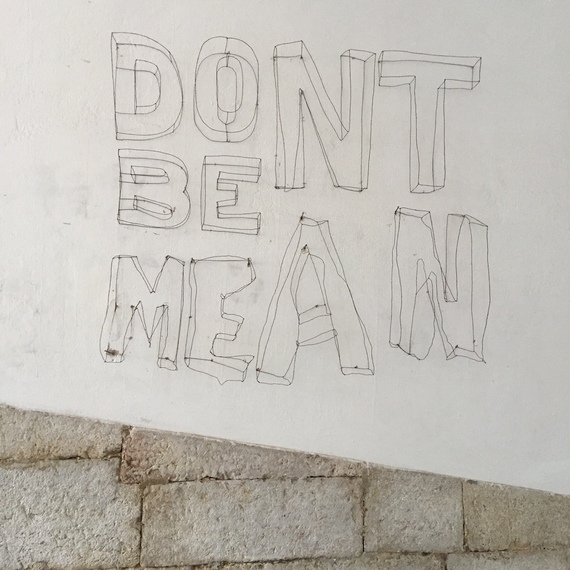 We will be back in New York in time to see the Art Brut exhibit, but I'd rather not think about leaving Paris, about shedding my cloak, closing my pores. Not just yet.