While hiking on a trail near my home in Colorado last month, I met up with a 57 year old man who recognized me from the Donor Sibling Registry and identified himself as a "donor baby". This got me thinking about all the "donor babies" out there who are close to, or already at grandparent age.

The utilization of "donated" gametes has taken decades to be publicly talked about as an accepted methodology for achieving pregnancy. Today, the number of families using "donated" (no one is really donating anything, as all gametes are sold and then bought) sperm or eggs have skyrocketed. The Donor Sibling Registry (DSR) members: donors, parents and donor offspring, are now at more than 51,400. No one can know for sure what percentage of total worldwide offspring are members of the DSR, as no such records are kept.

The majority of donor offspring posted on the DSR are under the age of 18. However, the DSR does include many donor conceived members born more than 50, 60 and even more than 70 years ago. The oldest donor conceived DSR member was born in 1943, back when the use of donor sperm was a secretive and often shameful procedure. Parents were advised to never tell anyone, not even their own child. It was common for parents to be told to go home and have sex so that they could always think that the husband just might be the biological father of the child. Family secrets do have a way of being dispelled though: deathbed confessions, found paperwork, chatty relatives, and now as commercial DNA testing becomes more popular, many are now shocked to discover the secret that their parents had kept for decades.

While we strongly recommend that everyone posts on the site, many DSR members never add their postings, so here are some very conservative numbers about older offspring ages:

The recommended secrecy was often rooted in the fact that it was not uncommon for doctors to inseminate patients with their own sperm, even into the 1980's. During this time, the patients were mostly women married to infertile husbands. These doctors were secretly (the couples were oftentimes told it was a "medical student in the other room") inseminating their patients for decades. Sometimes it was a lab worker in the facility, and in one known case, it was the doctor's weekend handyman who donated for three decades after having his own children in the decade before he even started donating.

Having a decades-wide spread between half siblings is not uncommon. Donor conceived person Barry Stevens, now in his 60's, reports that he has located half siblings born between 1944-1972. Four decades of offspring, all sharing the same biological father: their mother's doctor. 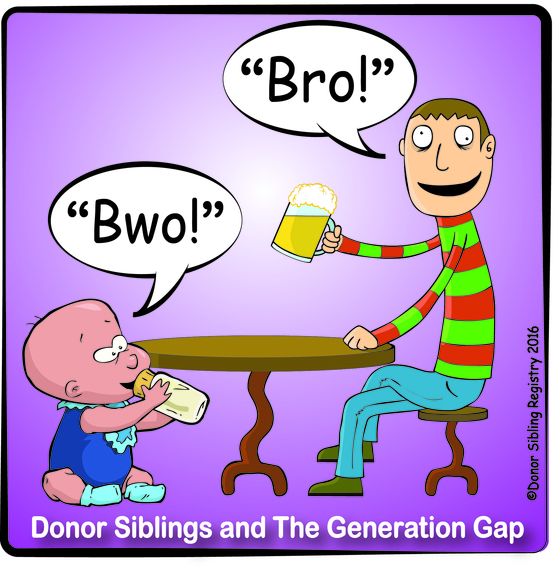 Donor conceived person Bill Cordray reports, "My father (my mother's gynecologist) was born on the last day of 1907. His oldest son was born in Feb. 1937. I am the oldest DI adult, born in July 1945 and my youngest new DI brother was born in May 1966." He goes on to say that he knows of, "...two or three others who were born a year or so earlier than 1945." Bill notes older donor conceived people that were known about back in the 1980's, "According to what [author Annette Baran] told me, there was one DI adult in her small study who was 68 at the time she wrote Lethal Secrets in 1987."

Many conferences that I see still address sperm donation, and even egg donation, (which has now been around for more than 30 years), as "new" reproductive technologies. So while many of the issues surrounding the ethics of the reproductive medicine industry are new to the public eye, these methodologies have been around for a long time. These are not "new" discussions to us, the stakeholders: parents, donors and offspring. As times goes on, we'll certainly continue to hear more from the resulting children as more of them become old enough to contribute valuable public input regarding the very industry that helped to create them.

And finally, it should be recognized that it's not just the donor conceived people who are becoming grandparents, it's also the donors, many of who donated back when they were in college. 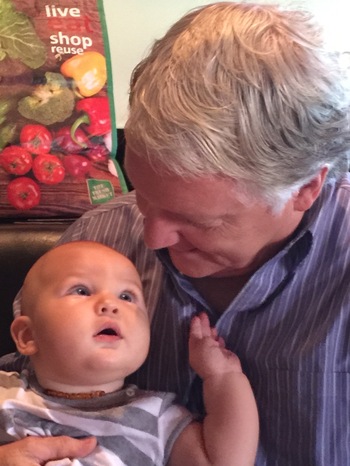 This donor had the opportunity to meet his first grandchild on the same day that he met his biological daughter for the very first time. Since then, he's been able to welcome his second grandchild into the world, becoming an important figure in the lives of his child and grandchildren.

The more than 13,500 donor-offspring and half-sibling relationships formed on the DSR have become multilayered over time, and can span generations. This number will continue to grow and these relationships will continue to enrich the lives of both donors and the donor conceived, so long as transparency and disclosure continue on as a common goal. Ending the promise of anonymity to both donors and prospective parents would further "color in" the missing pieces of genetic histories, and bring emotional health and even physical peace of mind, wellness, and above all, happiness to the deserving donors and donor conceived people.