During the 2003-2004 school year, my chemistry teacher told my class that global warming wasn't occurring. I believed her. When I attended New Jersey's Governor's School of International Studies in the summer of 2005, a professor told me the opposite - the evidence for global warming, and for the human contribution to it, was virtually incontrovertible. Confused about what to think, I began to research the issue. I also reached out to some of my other former teachers to ask for their input.

Three things became immediately clear. First, most popular articles about global warming contained more empty rhetoric than useful information. The mainstream media, as it far too frequently does, focused not on the truth but on grandstanding and a false sense of balance. Second, I didn't know enough climate science to look through a given study's results and determine their legitimacy. Third, I didn't have to - a different approach could tell me everything I needed to know about each study's likely veracity.

Global warming research falls into two categories: research by legitimate scientists and "research" funded by big energy interests. Legitimate scientists, who have no economic incentive to lie, conclude that global warming is a manmade crisis deserving our immediate action. The few studies that suggest otherwise are normally sponsored by organizations like Exxon and the American Petroleum Institute, interest groups with billions of dollars invested in the activity responsible for global warming.

As with global warming, knowledge of the individual and organizational incentives behind opposing "sides" of any debate provides us with critical information. This "political lens," though not completely foolproof, reminds us that certain claims deserve a larger dose of skepticism than others. The agendas behind a movement are especially important to consider when we lack in-depth knowledge of a particular issue.

A small group of teachers, parents, and grassroots organizers showed up to protest Brown's appearance on the show. Colbert, responding to the protesters and the Twitter hashtag #questions4campbell, asked Brown about her organization's funding sources. Brown refused to disclose her donors. Amidst the criticism that followed, various stakeholders have rushed to Brown's defense. They continue to argue that a focus on Brown's donors and political affiliations is a "desperate effort to distract from the real conversation" about teacher employment law.

The truth of the matter, however, is that educators would love to focus on substantive conversations about teacher employment law. Teacher "tenure" and dismissal and layoff procedures, though they are intended to protect both student and teacher access to a positive, productive educational experience, don't always work as intended. Unions recognize this problem and recommend legislative improvements that simultaneously address issues with the execution of the laws and preserve their important components. We also frequently discuss the laws on their merits. Additionally, student advocates would love to see reformers, unions, and legislators engaged in substantive conversations about how to unite behind and fight for causes that matter considerably more for the lives of low-income students: in-school causes like funding equity and improved teacher support and out-of-school causes like the living wage and immigrant rights.

Unfortunately, pro-Wright propaganda, featured much more prominently in the mainstream media than legitimate arguments for the defense, often drowns out these "real conversations." No teacher has a job for life, competent school districts can and do dismiss bad teachers, and there is absolutely no evidence that teacher employment law causes inequities between low-income and high-income schools***, yet relatively large swaths of the American public have bought Brown's misleading narrative and harbor severe misconceptions about the statutes and their effects. Brown isn't leading her crusade with a rigorous analysis of the facts and sound logical argument; instead, she "addresses" the lawsuit's substantive critiques by ignoring inconvenient statistics and logic and implying that disagreement indicates a disregard for the well-being of children. It's hard for the public to understand the nuances of education law and research when Wright supporters prominently and erroneously equate opposition to the lawsuit with the defense of horrible teachers.

Instead, it's significantly more likely that Campbell Brown's donors, like the people who funded Vergara v. California, actively exacerbate economic inequality. That Wright v. New York and Vergara conveniently allow them to undermine organized labor and distract us from the ways their business and political activities harm the families of the very same low-income students they purport to help. That teachers in unions care deeply about delivering an excellent education to their students, and that their opposition to the lawsuit stems from its negative narrative, erroneous claims and premises, and failure to provide solutions to the actual causes of teacher quality issues. In other words, looking through our political lens reminds us that there are literally billions more "adult interests" in support of Wright v. New York than in its defense.

Educators must continue to clarify facts about teacher employment law and support responsible reforms. Most proponents of challenges to the statutes are well-intentioned, and a focus on agendas alone would not do the issues justice. It is also entirely legitimate, however, to call attention to the profit and political motives behind lawsuits like Wright and Vergara. Knowledge of donors and allies helps us understand why, when unions and Campbell Brown present conflicting information about the law's intent and effects, Campbell Brown's claims warrant significantly more suspicion. 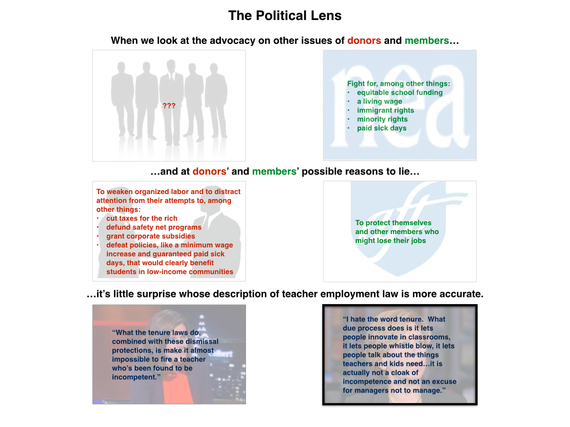 ***While the plaintiffs in Wright, unlike those in Vergara, do not erroneously contend in their complaint that the laws cause inequities between low- and high-income schools, the idea that low-income students are disproportionately impacted by bad teachers was mentioned by Brown in her appearance on The Colbert Report and still surfaces in discussions of the lawsuit.