WASHINGTON -- The military's controversial "don't ask, don't tell" policy, which is set to be rolled back in the coming months, expelled 3,664 service members between 2004 and 2009, costing U.S. taxpayers roughly $193.3 million, according to a new report from the Government Accountability Office.

Of that money, $185.6 million was in replacement costs -- money spent to recruit and train replacements for the gay and lesbian service members fired under DADT -- and $7.7 million in administrative costs.

That means the average expulsion under DADT cost taxpayers $52,800, partly because a significant number of those discharged held a "critical occupation or important language skill," the GAO reported. 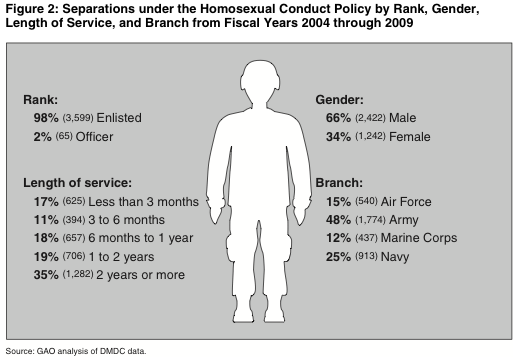 As Igor Volsky noted at The Wonk Room, these costs are just the tip of the iceberg, since DADT has been U.S. law since 1994.

Although President Barack Obama signed a repeal of DADT into law on Dec. 22, gay men and women are not yet encouraged to come out or to enlist; the policy remains on the books.

Obama, along with Chairman of the Joint Chiefs of Staff Adm. Mike Mullen and Defense Secretary Robert Gates, must issue a certification stating that the Pentagon is prepared to implement the repeal in a manner that won't hurt readiness, effectiveness, cohesion or recruiting. DADT will still be law until 60 days after that certification is rendered. Until then, service members are still at risk of expulsion.

The president has said that the nation's military service chiefs are all committed to moving forward quickly with implementing repeal -- even though several of them opposed the policy change -- but Rep. Duncan Hunter (R-Calif.) has introduced legislation that would require the chiefs to give more public input before moving ahead.

"Given that the service chiefs carry most of the day-to-day responsibilities for each service branch, their independent certification is just as important and equally necessary," Hunter said in a statement. "The implementation process needs to be efficient, and take into account the direct challenges involving our combat personnel. The best way to do this is to ensure the service chiefs are prominently positioned at the forefront of this discussion."

Rep. Bob Filner (D-Calif.) responded to Hunter's proposal by saying that "the elimination of 'don't ask, don't tell' increases the efficiency and readiness of our armed forces."