[Hat Tip: Boing Boing] Ethan Persoff, the proprietor of Comics With Problems (which, if you are among the nation's "funemployed" you should spend the rest of the day reading) has unearthed a rare gem: a comic book about the military's "Don't Ask Don't Tell" policy.

Published in 2001 by the Department of the Army's Assistant Secretary for Manpower and Reserve Affairs, the comic book -- titled "Dignity And Respect" -- is a "training guide on the homosexual conduct policy." It's like the X-Men, in that it's primarily concerned with a group of people born into a world that fears them, except it's told from the point of view of the people doing the fearing. 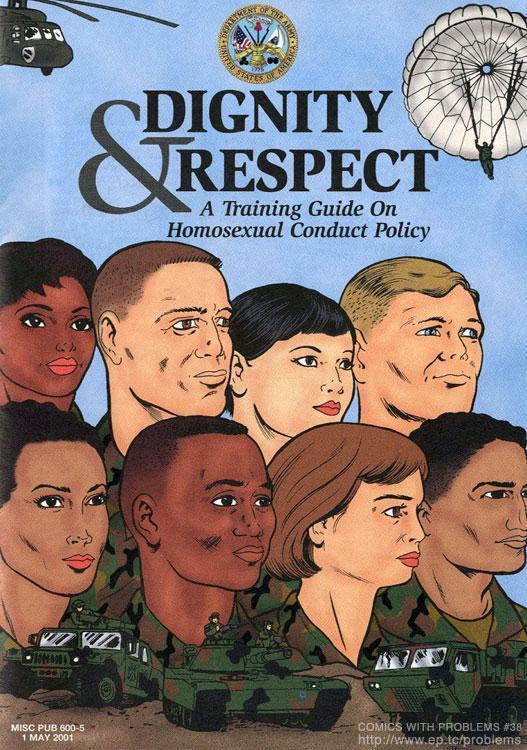 In the comic, a "Major Rivers" offers an "acoustic Powerpoint presentation" on a giant notepad, in order to "get the word out about the homosexual conduct policy" to a room of sexxy soldiers, so that he can bolster "unit cohesion and readiness." He reminds the soldiers that military policy concerns "homosexual acts," "homosexual marriage," or "attempted [homosexual] marriage."

That's when a bright-eyed, long-necked soldier asks, "What exactly does 'Don't Ask' mean?" CHRIST, THIS IS GOING TO BE A LONG BRIEFING!

So, Rivers decides to tell a "story about homosexual conduct." In the story, an Army sergeant comes to a superior because he heard second-hand about another soldier making the gay with a "soldier from another unit." Hooray for rumormongering! So, the commanding officer decides, "Let me pick up the phone and start cold-calling people, about these rumors!" Is there anyone left on the base that hasn't heard this story? Soon, that's taken care of: everyone is calling everyone else about the incident, like a scene from Bye-Bye Birdie.

The next day, the subject of the original rumor is called into the commander's office and informed that an inquiry has been opened about the rumors that are now circulating over two military bases. The soldier in question doesn't understand what's going on, and asks for a defense counsel (who probably has already heard about this from everyone calling everyone else). The soldier leaves, and everyone starts telephoning everyone else about it all over again.

The accused soldier has a series of stilted conversations about his rights. You are probably begging for some exposition as to whether he did any of the things he's been accused of by now, aren't you? Sorry! Not gonna happen! The accused soldier's commander asks another officer to make sure that no one gives the soldier "a hard time." Of course, everyone the soldier knows has, by now, heard all about how he's been accused of giving another soldier "a hard time."

Weeks later, the accused soldier is discharged! The system works! We'll never know if the accusations were true or not, but just trust the Army of Gossips in charge of everything!

Back at the presentation, another soldier asks Rivers: "What is a reliable person?" After his first story about that time a soldier got railroaded out of the Army over some rumors, I can see why she'd ask this!

So Rivers tells another story! He's a real yarn-spinner, about gay soldiers! In this tale, we meet a soldier who confides in an Army chaplain about his sexual identity, telling him that he wants to come clean about who he is, but he also wants to stay in the Army. The chaplain refers to this as a "very complicated situation," which is what you say when you lack the courage to say, "You know, I think the Army could really stand to act like it was filled with actual grown-ups!"

The soldier is told he can talk to a lawyer and their conversation will be kept confidential, which is important, given the propensity of Army commanders to pick up the phones and tell anyone on the other end of the line about all the illicit sexual activity they've heard about. So he talks to a lawyer, who talks like a lawyer. The soldier comes clean. The lawyer starts telling everyone she knows about the soldier's confession. Guess what? The soldier gets discharged! Good thing he trusted that chaplain's advice!

Back at Rivers' presentation, soldiers keep peppering him with questions, like: "Can homosexuals serve in the military?" Isn't it clear that they cannot, at this point? Isn't it also clear that some guy can just start a rumor of homosexual conduct and get a soldier discharged by now? Because that's been the big takeaway so far!

Of course, we also get this wiseacre: 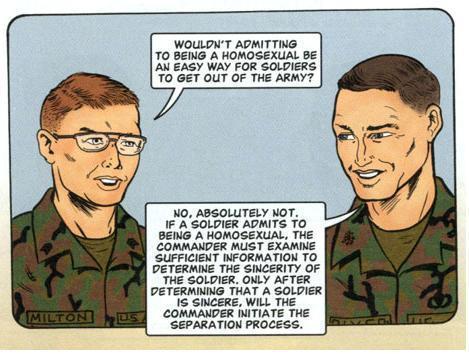 Catch-22 is the greatest catch there is, after all!

The good news, of course is that gay-tinged harassment of soldiers will also not be tolerated, a point Rivers makes in another story.

In this last tale, a group of soldiers make fun of Sergeant Gates, asking him if he'd "enjoy a date with a good looking man." But their commanding officer overhears the crack, and Gates' persecutors get in all sorts of trouble. Good thing he was there, and not learning about Gates and his alleged man-dates through a rumor mill that produces semi-credible accounts that spawn a frenzy of phonecalls!

The offending soldiers will have to attend a "consideration for others" class. But no one will get discharged! And the really good news is that Sergeant Gates is so thankful to his commanding officer that he agrees to stay late to fix some helicopters!

And the moral of the story? Well, "Sergeant Gates" grew up to become Secretary of Defense Robert Gates, probably. And all the helicopters he fixed, out of gratitude, made everyone all "unit-cohesioned" forever! It also made everyone have giant heads, that defeated the terrorists! 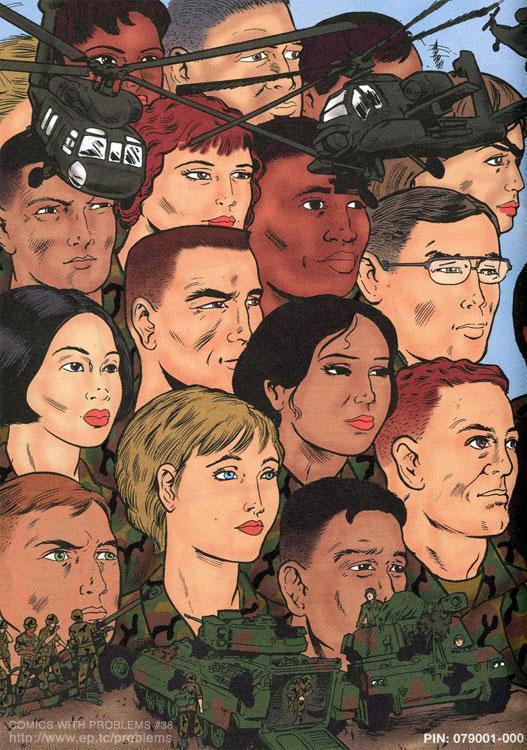 And that's the incredibly true story about how the insane "Don't Ask Don't Tell" policy became a comic book. Next up, President Barack Obama tries to maybe one day overturn the policy, if the political cost can be kept low, in "the Dark Phoenix Saga."