After a rough childhood, I dedicated my life to public service, starting in the military. I had no idea at that time that every one of my major military accomplishments, including acceptance to the U.S. Naval Academy, would be overshadowed by my sexuality.

I earned a spot among the elite, high-testosterone community of Military Explosive Detection Handlers. While stationed in the Middle East, the men in my unit spent lots of time with prostitutes. Soon, my refusal to partake was reason enough for my peers to accuse me, day in and out, of being gay. 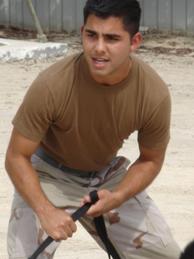 "My Navy peers often harassed me, insisting the extra training I did with Marines was a search for sex partners. Once, I was hog tied to a chair, rolled across the base, and left in a dog kennel with feces. I was forced to simulate sex acts, on camera, to armed service members with trained attack dogs in the room. Men with hoses sprayed me down in full uniform.

Thousands of miles away from the United States, being subjected to extreme humiliation by my own military leadership, I did not feel hatred. I felt fear. Fear they would hurt me and no one back home would ever know. I had no gay friends to talk with and no gay personal life. I was only 18 years old, and I was afraid if I told anyone, I would be kicked out for being gay.

Eventually, someone a rank above me reported it, and there was an investigation that found dehumanizing pranks against me were habitual. I was preparing to testify, when I got a call from a Navy attorney telling me the case was dropped.

So all I have to show for my abuse is a two inch packet of investigation findings and post traumatic stress disorder.

Since 1993, the policy that reads "Don't Ask, Don't Tell, Don't Harass, Don't Pursue" (DADT) has legitimized discrimination and abuse against our Country's finest. It's a policy that made it easier for my abusers to torment me. I support house bill H.R.1283 which would replace DADT with a non-discrimination policy, and when it comes to a vote, our President and legislators in Congress should have little fear of opposing it. Because according to a 2008 Washington Post/ABC News poll, 75 percent of Americans favor allowing openly gay people to serve in the military.

I wish I could still be serving in our military, but after three and a half years in the Navy, including two and a half years stationed in the Middle East, I resigned because I refused to be punished any longer for who I am. My official statement to the Navy reads in part:

"I am homosexual. I am proud of my service and had hoped that I'd be able to serve the Navy and country for my entire career. However, the principles of honor, courage and commitment mean that I must be honest with myself, courageous in my beliefs and committed to my course of action. I understand this statement will be used to end my naval career."

I told, and I was discharged.
Also From Youth Radio/Youth Media International: