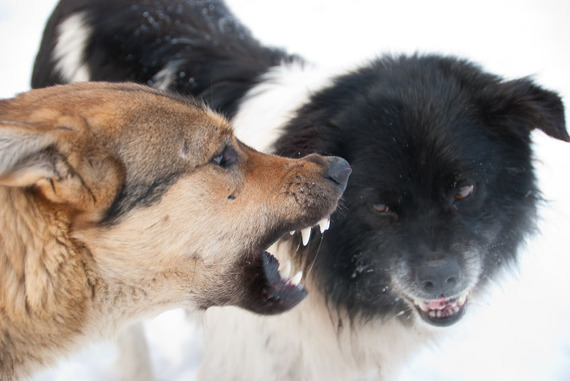 It happened again. I was walking along a park trail with Bodhi, enjoying the 6 a.m. calm. That the park is largely empty at that hour is something I really enjoy. But suddenly, a man walking 3 dogs appeared, headed toward us on the path. As there was plenty of room to move over, that's exactly what we did in hopes of avoiding them.

Upon spying us, the two cocker spaniels continued to prance along with their cockers-don't-care attitudes, while the Lab mix acted as though Bodhi was a long lost relative who owed him money. In his over-the-top enthusiasm, the dog pulled free of the man's grip. Flexi leash banging along behind him, he began to run toward us.

You wouldn't let your child run up to every stranger you pass. Why would you possibly let your dog do the same?

Now, Bodhi is not an aggressive dog, but when I adopted him from the shelter five years ago, he was very dog reactive. I worked long and hard to teach him alternatives to lunging and barking at other dogs, and he does very well now. He's still insecure around other dogs (which is what the behavior was really about), but now when he sees them he voluntarily places himself by my side and looks at me for further instructions. Great, right? Sure. Until despite our best efforts, another dog rushes up to Bodhi or otherwise invades his space. Then, depending on how worried he is, all bets are off and violence could ensue.

As the Lab headed toward us I called to the man, "Please grab your dog!"

The man looked surprised, and finally managed to get the dog back on leash.

Unfortunately, this is far from a rare occurrence. I wonder, if I were walking a 200-pound black mastiff with glowing yellow eyes, how many dogs would end up wafting our way on clouds of intended friendliness. I remember when Mojo, my soul dog who passed in 2008, was alive. Walking my very tall, handsome 120-pound, mostly-black, German shepherd-Rottweiler-Malamute-wolf mix down the street, people would often cross to get out of our path, even though Mojo was not at all aggressive towards people. I do not, however, remember dogs flying toward us and people telling us not to worry.

In this particular case, the dog pulled the leash out of the man's hand. Mistakes happen. But more frequently, it's a case of someone walking a dog off leash and ignorantly assuming everything will be fine. It's irresponsible to put your dog in the way of potential harm by assuming that other dogs are friendly, even if they look as though they are.

You wouldn't let your child run up to every stranger you pass. Why would you possibly let your dog do the same? Do everyone a favor and don't assume my dog -- or any other dog you pass -- is friendly. It's the truly friendly thing to do.