By now, you've seen the viral clip of a Manhattan pigeon casually pooping on the head of Donald Trump at a huge GOP rally. Trump screams, "Arrrrgh!" and, upon pawing at his hair, inadvertently rips off his toupee, then goes on to proclaim, baffling everyone: "Feel the Bern!" 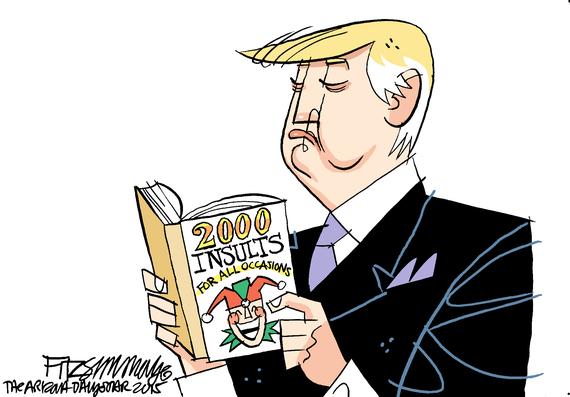 Wait - you're saying this video doesn't exist? Yet so many people saw it. I swear I saw it.

In my mind's eye, that is. But maybe you can relate. Every time Trump hits the headlines with a new xenophobic resolution, an ableist parody, a misogynist vulgarism, or an outright lie (such as the claim that he, along with "so many people," saw a video of Muslim crowds in New Jersey cheering on 9/11), my brain parries with fuming fantasies of the day he'll receive his comeuppance: how he might get humiliated by a journalist's gotcha! question in a live interview, or accidentally show up drunk to the next GOP debate, or even fall victim to some scatological avian mishap. It's fitting that, in the private movie reels of the imagination, anti-Trumpers may gleefully envision how this megalomaniac will go down...hard. Perhaps it's the best we can do, since Trump's rising poll numbers keep predicting the contrary.

Months ago, we could've fantasized about how Trump would crash and burn upon saying something offensive beyond belief: like generalizing Mexicans as rapists, or mimicking the "broken English" of Chinese and Japanese negotiators, or calling for a ban on all Muslim entry into the United States - you know, racist statements that should sink a candidate. No such luck. On each occasion, Trump has gotten away with it, racking up clicks and chatter to boot. It's like a cosmic joke, though, as Hillary Clinton, Arianna Huffington, and public figures are increasingly pointing out, it's really not funny anymore.

Trump's latest Islamophobic remarks are, as Jeffrey Goldberg puts it, "providing jihadists ammunition for their campaign to demonize the US." The open secret of hate speech is indeed that it engenders hostility across the board, in its proponents as well as its targets, ensnaring all parties in vicious circles of mean spirits and raised voices.

What we need to remember is that Trump is capable of far more than whipping up a prejudicial frenzy among his loudest supporters. Because clearly, some of Trump's worst qualities are rubbing off on his fiercest critics as well: scornful, bellicose rhetoric; childish name-calling and ad hominems; a fervent search for weak spots; and a thirst for spectacular take-downs.

For my part, Trump's extreme and ubiquitous hate speech fills me with hate - towards Trump and all that he stands for. Or if not quite hate, then at least a moral fury: not the kind of fury that makes me want to engage in sensible debate, but the kind that leads me to hurl expletives at my television like a tantrum-throwing teen. I don't think I'm vengeful by nature. (I'm currently working on a book about the vitality of reclaiming empathy, care, and reparative work in our fractured world.) So I realize that when Trump's outrageous declarations manage to reduce me to a bitter, seething person - a person I don't want to be - I've already succumbed to his detestable gospel. I couldn't help smiling smugly, for instance, when I saw a CNN headline (which I initially mistook for an Onion barb) that read, "Petition to Ban Donald Trump from UK Passes 300K." A brute example of just desserts, fire fought with fire.

Scoping out high roads doesn't mean going silent, or discouraging people who courageously protest Trump's rallies, or discounting, as Audre Lorde described, the "uses of anger" in moments of political expediency. To be sure, Trump's inflammatory ideologies have lit up national conversations about race, immigration, free speech, and crucial topics. Dialogues and demonstrations are good; they're necessary for progress. Then again, maybe some matters shouldn't be dignified as debate-worthy at all. Do issues such as banning Muslims, bombing civilians, and sanctioning torture even deserve to be treated as "whether-or-not" policy debates in the 21st century?

Call Trump what you will: a savvy troll, a brave truthsayer, a fear-mongering bully. The fact, regardless of whether he gets the GOP nomination, is that his soundbites and slurs of 2015 have wormed their way into the public's ear, like bombastic summer songs far outstaying their welcome.

So for the New Year, let's resolve not just to resist Trump's bad policies, but also to rise above mirroring his worst traits and tendencies. For if we make ourselves in Trump's image, then he's already won.

Fantasies fueled by contempt, condescension, deceit, and rigid partisanship: these are not the dreams we're looking for.