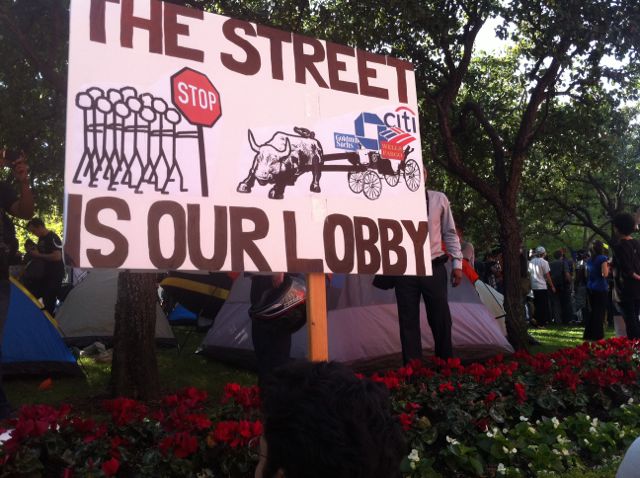 This week the city of Los Angles announced that after two months the tent city known as Occupy LA would be dispersed -- by force, if necessary. The city is offering the inhabitants 10,000 square feet of office space, some urban farmland and other incentives in exchange for removing their tent city.

The encampment, now deemed illegal by city authorities but a legitimate exercise of rights protected under the first amendment by the protesters, is the last major tent protest in the country. Soon Occupy LA will face the same fate of other tent protests across our land from New York's Wall Street to the city parks of Oakland.

But all this may come to an end.

The city's confrontation with Occupy LA's tent encampment brings to mind the biblical saga of Abraham and Sarah pitching their tent in the fields in order to spread their teachings of lovingkindness.

Abraham and Sarah's hospitality was their own "protest" against the pervasive selfishness of the privileged of their time. As the Biblical story describes, wealthy city dwellers would take advantage of strangers through theft and trickery, shunning the needy and abusing them. As a result of this bitter selfishness their cities were destroyed as a divine comment on their twisted values of avarice and greed.

By contrast, Abraham and Sarah, who likewise had wealth and resources, did not fear the stranger and the poor. They did not hold resources in a tight fist, instead they opened their hands to those in need, and were blessed.

Abraham and Sarah represent God-serving universal benevolence, wrote the 19th century thinker Rabbi Shimshon Raphael Hirsch. Their tent represented a community of universal charity, where open hearts, open homes, open hands and a readiness for sacrifice of time and energy and money for the general good is required.

It is fitting that the Occupy movement has at its center the tent as a symbol and a reality. The tents remind us of the wisdom and spiritual revolution of our ancestors. Abraham and Sarah's tent was open on all sides, welcoming strangers with food, kind words grounded in spirituality, and ultimately the basis for a community of shared values and ethics. What is required of us now is that the spark of these teachings catch fire.

The economic realities of our time require a level of lovingkindness beyond anything that we have achieved before. Occupy LA's tents are a call to that human spirit, which stands so much in contrast to the cut-throat world around us. It will be a shame on the city and the Mayor's office to silence that call.

The message of Abraham and Sarah to the world more than 3,000 years ago provided a radical shift in focus. It moved humanity toward a spirituality where seeing and meeting another person's physical needs became a spiritual injunction, a spiritual necessity.

If the protest is moved to an office building, the tents will not be in front of city leaders on a daily basis reminding them and us of our shared humanity: the teaching of Abraham and Sarah that blessing comes when we share resources, and care for each other and for the stranger.

We have nothing to fear from people in tents, we have much to learn from them.