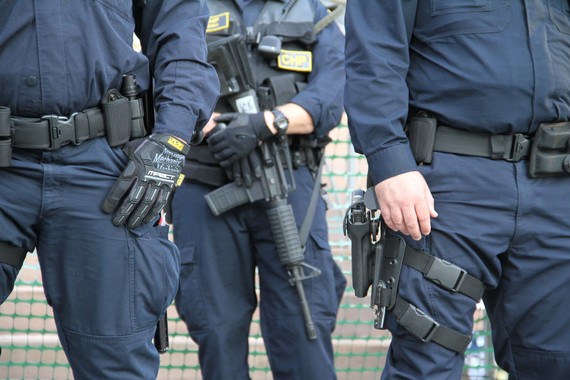 Now that the dust has settled from the Republican and Democratic National Conventions, officials from Cleveland and Philadelphia are falling over themselves to praise the police response to political protests.

However, there is far more at play than the two-dimensional analysis depicted by mainstream media.

Despite a relatively low turnout by protesters, the law enforcement apparatus in both cities was as robust as ever. Part of the excuse for the disproportionate police response is that each quadrennial political convention since the turn of the century has been designated a National Special Security Event (NSSE).

The NSSE designation means that millions of dollars is funneled from the federal government into local coffers and spent on police personnel, equipment and weapons. Cleveland and Philadelphia each got roughly $50 million for this purpose. The NSSE designation also places the Federal Bureau of Investigation (FBI) and U.S. Secret Service at the top of a multi-agency "security" force.

The tactics used in advance of the protests in Cleveland and Philadelphia, under the auspices of the NSSE, were drawn from the same playbook that's been used consistently for more than a decade. In both cities, we saw unconstitutional time and place restrictions on planned free speech activity weeks before the protests. Law enforcement officials also discredited activists in the mainstream press, a tactic commonly used to frighten the public and justify any heavy-handed approach used during the convention.

In the days leading up to and during the RNC, the FBI and other law enforcement agencies harassed and tried to interrogate known activists and political organizers in Cleveland. In one instance, agents carried out a warrantless raid at the home of several activists, with guns drawn in an apparent effort to intimidate protesters.

Continuing a trend that began in 2000 at the RNC, both Cleveland and Philadelphia purchased insurance policies indemnifying the police against any claims of civil rights violations.

But, because the actual threat of violence and terrorism has remained relatively low at these political conventions, the law enforcement apparatus has been largely unnecessary. By exaggerating potential threats ahead of time, however, the state can deploy massive numbers of police as it did in Cleveland and conveniently take advantage of the consequential chilling-effect on political dissent.

The street protests at the RNC only numbered in the hundreds. Yet, there were thousands of police in Cleveland from dozens of jurisdictions around the country, often far outnumbering the protesters. Police also seemed to selectively target certain political groups as they did with one march consisting of about two-dozen anarchists, which was intently followed and eventually surrounded by roughly 100 cops.

If that wasn't intimidating enough, some officers openly carried automatic assault rifles among the crowds and frequently used bicycles to control the demonstrations, either as barricades or as weapons with which to push protesters back from police lines.

In Philadelphia, undercover police were widely used but seemed to focus disproportionate attention on Black Lives Matter activists. During a march organized by Philly Coalition for R.E.A.L. Justice down Broad Street, several undercover police were caught surreptitiously filming protesters and driven from the crowd.

Why so few protesters?

Many of those paying attention to the events over the past couple of weeks were surprised by the low number of protesters at both the RNC and DNC.

Despite the neo-fascist threat embodied in the Donald Trump platform, relatively few activists showed up to resist his candidacy. And while it's difficult to pinpoint the cause(s) of low protester turnout, there are some plausible rationales.

Since 2000, the convention protests and the corresponding spectacle that surrounds them leave little room to draw attention to important social struggles. Indeed, the cat-and-mouse dynamic between protesters and police that invariably plays out at each convention (mainly as a result of repressive tactics by the state) forces activists to seek out more meaningful moments and sites of confrontation.

Perhaps the utility of using the conventions, in particular, as a platform to advance social change movements -- like those fighting against wars, economic inequality, or police violence -- has run its course. Low protester turnout probably has more to do with burnout from fruitlessly organizing around events that only occur once every four years than it is a reflection of the Left's political strength more generally, since effective militant actions continue to occur in cities across the U.S.

The heightened level of fear-mongering coming from public officials after the sniper attacks in Dallas and Baton Rouge also contributed to the carefully designed rhetoric used to chill dissent in the days leading up to the DNC and RNC. Ohio State Senator Nina Turner said she was "nervous as hell" and called the RNC a "powder keg." Turner also said the shooting in Dallas "puts more gasoline and dynamite and the match on top of all of that." Cleveland Deputy Police Chief Ed Tomba followed up by letting the public know the CPD has "got to make some changes without a doubt," and would be expanding its intelligence effort.

Tensions between different political groups also compelled some Black Lives Matter (BLM) activists to boycott the protests. One local BLM organizer cited questionable political motivations by other protest groups as a reason to avoid the RNC in Cleveland. "We are boycotting the protest because the people who started the protests are people in segregated unions and segregated communities," said Jeff Mixon of BLM Cuyahoga County.

Lack of militancy posed no threat to the establishment

One of the main objectives of the Republican and Democratic Host Committees responsible for throwing these multi-million dollar private parties is to stage unfettered conventions. NSSE designation and the corresponding security apparatus is meant to help the host committees achieve that objective.

During the RNC 2000, protesters blockaded numerous intersections throughout Center City in a highly coordinated effort, causing traffic gridlock that paralyzed the downtown area.

Police were quick to conduct mass arrests, many of which were carried out with brutal abandon, in order to clear the streets of protesters.

Last week, police stopped short of using brutality not because they weren't capable of it or hadn't used it before, but because protesters posed no real threat to the established order. There was little-to-no planned direct action or civil disobedience. There was almost no concerted effort to challenge the status quo.

The group that could brag of the most DNC arrests was Democracy Spring, which in April organized "the largest act of civil disobedience of this century" in Washington, D.C. in order to "end the corruption of big money in politics and guarantee the right to vote for all."

Yet, despite more than 100 activists arrested last week, Democracy Spring still failed to make any meaningful mark on the DNC or its goal of ending the corruption of big money in politics. In fact, Philadelphia is using its new "protest decriminalization" law to claim the city didn't arrest any protesters at all during the DNC.

After getting fed up with people jumping the fence outside the Wells Fargo Center, where the DNC was held, the Secret Service began charging protesters federally. In all, eleven people were charged with "entering restricted grounds" and will have to defend themselves in federal court.

Some DNC protesters may not have even noticed the arrests, as they were busier searching for lost alpacas than they were planning to overthrow the Democratic party, let alone our entire political system.

Bernie supporters were ok with burning sage, but quick to condemn the burning of an American flag on the final day of the convention, positioning themselves to the Right of a majority of US Supreme Court Justices who considered flag-burning protected speech.

Protests were uncharacteristically about electoral politics

Political convention protests since 2000 have rarely, if ever, been about the events inside the convention. While activists rightfully warned voters and condemned the policies of then-Governor George W. Bush, the day of direct action at the RNC 2000 had more to do with mass incarceration, the death penalty, and police violence.

Although there were disruptions staged inside Madison Square Gardens during the Republican convention in 2004, the protests that year and again in 2008 in the Twin Cities were primarily centered around resistance to the wars in Afghanistan and Iraq.

This year, the protests in Cleveland and Philadelphia had more to do with the candidates themselves and electoral politics than the array of domestic and foreign policy issues currently facing the country.

Praise for how police handled the protests in Cleveland and Philadelphia seems universal in the mainstream media. But, lest we misunderstand the last two weeks as a fundamental shift in policing practices against protesters, we need only look to the recent disproportionate reaction to protests in Baton Rouge (before three BRPD officers were killed).

As police departments across the country become more militarized and armed for battle, the more we will see repressive and violent responses to political protest. Groups in Cleveland are fighting against the ongoing use of equipment and weapons purchased with federal funds in advance of the DNC, but it's unfortunately all too common for host cities to keep and use those weapons in response to future protests and against its residents, especially in neighborhoods of color.

We must continue to push back against characterizations of the police as restrained and reformed. If anything has become clear from the contemporary model of policing political protest, coined by social scientists as "strategic incapacitation," it's that the more our social movements gain momentum, adopt militant tactics, or appear to threaten the status quo, the more we can expect a repressive and violent response by the state.

Kris Hermes is an activist, legal worker, and author of Crashing the Party: Legacies and Lessons from the RNC 2000.