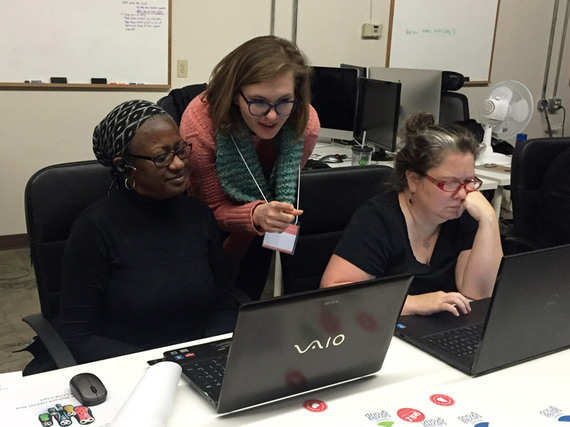 Photo courtesy of Girl Develop It

Girl Develop It is a nonprofit organization that provides opportunities for women to learn software development. Launched six years ago in New York City, Girl Develop It now operates in 53 cities nationwide. Corinne Warnshuis, executive director of Girl Develop It, spoke about the organization's development and weighed in on women in Science, Technology, Engineering and Mathematics.

Olivia Deng: What do you think makes Girl Develop It so successful?
Corinne Warnshuis: We are teaching women from all different backgrounds. Lots of liberal arts and arts degrees. We have artists and creative people with expertise in different fields. A great example is a woman who has 25 years of experience in marketing, PR...You don't have to just be a computer programmer. You can be an artist who codes. We are creating this new pool of talent...Younger generations can look up to this.

What kind of women participate in Girl Develop It?
Women from all different backgrounds. Our youngest students are 18...It's never too late to learn a new skill. You can be a college student who has a degree in political science and [wants to] become a little more marketable in the job market. Or a mom who has a degree in computer science [from] the 80s and 90s. Women entering the workforce from the first time out of college, women re-entering the workforce. Women who want to learn technical skills as a hobby. Women who want to start their own online business.

What stories of women who have participated in Girl Develop It stand out to you?
There are so many great stories of women who graduated college and decided they wanted to pursue a career in technology. Women get supported in our community and they get their first role as a developer. There are stories about women who found confidence because they've always been told this wasn't for them, [and they] became national conference speakers. There's a woman named Alicia. She's a 55-year-old African American grandmom from Atlanta. Alicia is someone who came to Girl Develop It classes and built an app for domestic violence and put it in the app store. Fast forward two years [and] she's developing apps full time. She was featured on the Worldwide Developers Conference.

What problems do women in STEM encounter?
For women I think it's a real challenge. Women have had less technology education, which is one reason Girl Develop It exists. The dominant idea is that it has kind of been a men's thing. If they [women] do end up pursuing a career in technology, it's not always a welcoming place for them...The more women we educated and empowered through our program, [the more we hear] 'I demand this is how this workplace supports me.' We are finding opportunities to make it a better place for women.

What are the greatest benefits of getting more women in STEM?
There's more diversity. Teams with people from different perspectives are more successful. We want to provide equal opportunities for women for building tools and technologies that will fuel the future. We don't want women to be left behind so I think in general, women have a lot to contribute to technology and the future of technology. Women tend to be the ones who learn something and give back and lift up their communities and societies. The more women we can empower through technology the more empowered society will be as well.

What advice would you give to women who are hesitant about learning software development?
I would say come to a class. Our slogan is 'don't be shy, develop it.' We create an environment welcoming to everybody. If you're feeling hesitant, come to a code and coffee, study group. Nobody's going to be mean. It can be fun. Or you'll find out you're not interested, but at least come and try.