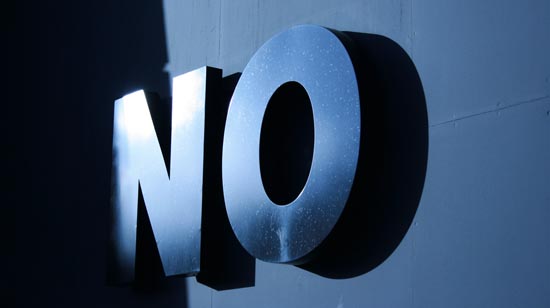 The worst part of never saying no is that our projects never come to fruition in a way we want them to. And that stinks. Lately there's been lots of arguing and debating about goals, success and leadership, much of it revolving around setting boundaries for ourselves and others.

Let's face it--we can't be a womb for everyone to crawl up inside of so they can replay their infancy. Their business or project is theirs--they should own it.

I can relate: for years I never said no and was the go-to guy that everyone came to for problem solving. They smiled and told me they didn't know what they'd have done without me. Lucky me...

Are any of these you?

If you said yes to one or more of the above, chances are you're an enabler (take a self test here).

We always find it hard to say 'No,' especially to those we love. But that tiny word has power. If you don't say it sometimes, you have no priorities; you can forget about your goals as you get sucked into other people's fuzzy concepts.

Ready to get over it? Let's do it.

Snap Out of It
If you can't say no--you can't manage a project. It's that simple.

Setting priorities is how you get things done. Using untrained intuition is nonsense, built on arrogance ("I have a connection to the universe"--aren't you special) or lack of self-esteem ("I own my weakness but not my strengths"). There's no innate ability to doing things well; it's about know-how and courage. Don't take my word--research it. If you don't want to research it, then perhaps you think you know it all. Bully for you.

Not everyone has good ideas or common sense. Most of us are good at something; few if any are good at everything. Knowing the difference is a learned skill--not a straight from birth ability. Again--research it.

Usually the boss is the one to say no. I think it's a mistake. Telling the boss everything they want to hear feeds their ego but it doesn't help them or us. If they don't know it, tell them. If they deny it, show them proof that their ego is not getting them hard results. It works.

If a manager always says yes, everyone else will do the same, your staff won't think for themselves and everything dumps into your lap. Not focusing on priorities makes it difficult to get a team in sync with goals.

Where's the value in that?

Being a real leader not only means knowing when to say no and explain why, but also the ability to accept a "no" from your team. Not listening is egomania and arrogance. Speak to your team, hear them and make your decision based not on perception of need or the desire of want--base your decisions on reason, information and accountability.

You can only follow your gut if you've trained it--not when you mistake emotional nonsense for intuition. They're not the same. Never have been. Never will be. That's truth. Not yours or mine, but factual truth.

Do you want to focus on what doesn't work or move on to what does? I know what my answer is.

Five Ways to Say No and Stick to It
You have to be willing to listen in order to know when to say no. Fuzzy assumptions about intuition (unless you're well heeled with experience) can and often do lead to problems.

Here are five thoughts as to how best to handle saying no:

With apologies to no one: if you can't use common sense to manage your business and to think things through, especially when it's a new idea, you're nuts. Nothing wrong with admitting you don't know something. How else can you learn?

Have you struggled with taking on more than you can handle? Have you learned how to avoid over-committing yourself?