My daughter's soft little hands were gently placed on my cheeks, and she was looking straight into my eyes. In some sense it felt as though she was looking right into my soul. Just staring at me, studying my face. A million and one thoughts went running through my head and my heart was filled with so many emotions. As she kissed the tip of my nose and whispered, "I love you Mama" all I could think was "Stay this girl forever."

Don't be that girl who becomes hardened and calloused because life has made you walk through too many storms. Instead be the girl that is as gentle and kind as you are on this very day.

Don't be that girl who doesn't ever take the time to really get to know someone and invest in their lives. Instead be the girl who digs deep, shows people you care, and loves them as you would love yourself.

Don't be that girl who uses people as a means to an end. Instead, be the girl who runs the marathon of life side-by-side her friend and is there until the end.

Don't be that girl who follows everyone else's lead. Instead be the girl who is the leader.

Don't be that girl who trusts no one because she has been hurt too many times. Instead be the girl who takes that hurt and decides she never wants someone to feel that way as a result of how she has treated them.

Don't be that girl who finds her worth in a man. Instead be the girl who looks to God and within herself to see the precious gem that she is.

Don't be that girl who hurts her friends to feel better about herself. Instead be the girl who is so confident in herself that she is able to support and build her friends up when they need it most.

Don't be that girl who is too afraid to take chances. Instead be the girl who learns that sometimes in life you just have to take a leap of faith.

Don't be that girl who holds grudges and seeks revenge. Instead be the girl who forgives easily and loves quickly.

Don't be that girl who plays victim in her own life. Instead be the girl who take the steps necessary to find a victory in every single day.

Don't be that girl who fights so hard for approval of others that she loses herself in the process. Instead be the girl who stands up for what she believes and never loses sight of becoming the most authentic version of herself. 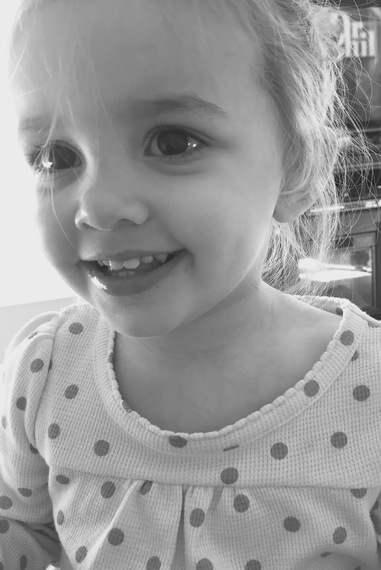 Because the truth is, I have been "that girl" many times in life. I have cared too much about what others think. I have lost sight of what's most important in life throughout the years. I have let others carve the path for me, instead of carving my own way. I have become hardened and shut-off in fear of experiencing pain like I have in the past, and I want better for my daughter. I want her to be the girl who learns at young age that she is strong, beautiful, and loved. I want her to feel secure enough in who she is, that when the day comes along (because it will) when someone tells her she is not good enough, or not worthy of their time, she will know they are not being truthful, and be able to walk away with her self-esteem still in tact. I want her to see diversity and think it's beautiful. I want her to see someone hurting and have the desire and need to help them. I want her to know that there is nothing she can do to lose the love of her parents and her heavenly father. I want her to be able to look herself in the mirror and see grace, hope, and forgiveness. And one day, if she is so blessed to have children, I want her to look into the eyes of her child, and see a glimpse of heaven as I did today.

This article was originally featured on the author's blog:http://www.mommysfrontporchview.com

A mom who survives on writing, chocolate, God’s grace, her husband’s love, her children’s smiles, and a little bit of wine.