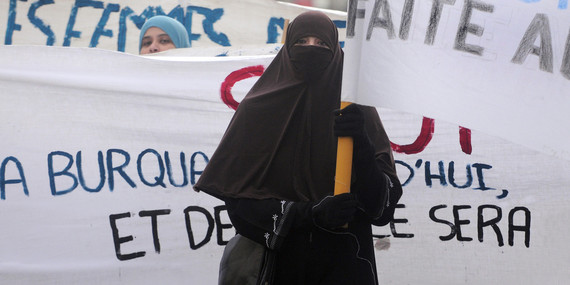 In the days after the Charlie Hebdo attacks in January 2015, I interviewed a dozen Muslims in Lyon, France. Among others, I talked to unemployed young men hanging out on a street corner, a veiled funeral parlor employee, a public official, and a retiree. They had vastly different opinions about the merits of the satirical magazine, but each of them immediately condemned the killings.

Last Friday's butchery was even less complicated. It has been loudly denounced not only by French Muslims, but also in the less likely quarters of Hamas, Hezbollah, and Islamic Jihad. Before November 13, it was impossible to imagine an act so horrible that would impel these three groups to stand with France against terrorism. Not anymore.

How do we explain the willingness of men to murder people cheering for a football team, laughing over dinner, or dancing in a club? Part of the answer lies outside of France -- with ISIS, and its ability to control territory, recruit conscripts and project its power back into European venues. But part of the answer lies within French borders. At least some of Friday's attackers were born and raised in France. If the plot was coordinated from abroad, the planners found willing accomplices among France's own citizens.

Why do some French Muslims turn on their country? France's integration policies offer one key explanation. But not for the reasons you may think. Viewed from the outside, French policies to ban headscarves in schools and full face coverings in public are typically seen as affronts to Muslims that attempt to force uniformity. There is some truth to this view, especially when political leaders play to far-right voters to hinder the growth of the National Front.

On the other hand, these steps are also part of a longstanding promise that France has made to its immigrants: Come here, act French, and you will be French. Compared to Germany or Switzerland, France has historically granted easy access to citizenship. Once you are in, the country promises you not only liberté, but also egalité and fraternité.

This approach has worked to some extent. Research shows that three-quarters of all Muslims in France "feel French." This is especially true if they were born in France and speak the language fluently. Practicing Islam doesn't even really make immigrant Muslims feel less French -- it has about the same small downward impact that faith has on Christian immigrants settling in this famously secular state.

It makes sense, then, that no more than a tiny sliver of France's more than 4 million nominal Muslims is prone to homicidal extremism. French security forces keep tabs on between 3,000 and 10,000 people they consider potential threats to the state. Even if all of these were Muslims -- which is certainly not true -- that would constitute less than a quarter of one percent of France's Muslim population. And only a small portion of these will actually undertake violence.

At the same time, those few radicalized Muslims who pose an acute threat to French citizens are a glaring testament to France's failure to deliver fully on its integration promise. France has well-known and persistent problems in some of its rougher suburbs, which tend to disproportionately lean Muslim. Poor schools, social isolation, and stigmatization mean it is hard for residents to feel like they have a future that involves a steady job and a path to somewhere better. These neighborhoods are often plagued by drug use, vandalism, and sometimes riots.

This has been coupled with racism and Islamophobia that has marked people from every walk of life. One middle-class woman I spoke with during my January interviews moved to the countryside in search of the stability of a small town. In her first year there, her nine-year-old son was called a "dirty, shitty Arab" by another child, in front of his classmates and the teacher. A veiled woman heading to the national rally following the Charlie Hebdo massacre told me that she had to leave the subway with her family because "I saw the anger in people's looks, and I don't want my kids to bathe in anger."

There is no simple solution to France's problem. Governments have spent decades investing in suburban infrastructure, with only modest successes. The vast majority of non-Muslim French people may be kind to French Muslims in one-on-one interactions. That doesn't take the sting out of moments of degradation like the ones my interlocutors related in obvious pain. France has promised more than it has delivered, and that leads to deep and heartfelt frustration.

One of my Lyon interviewees worried openly about France's future. She told me in January:

France is making jihadists, and that is going to turn against them; they have not done their work in the suburbs. Society says, "We don't want them," so they say, "They don't want us, so we'll be like this." They'll make a Beirut here in France if it continues like this.

Beirut and Paris were both the targets of brutal terrorist attacks last week. And they will probably be targeted again. To ensure that Paris does not become as splintered as Beirut, France needs to do more than fight ISIS abroad and monitor radicals at home. It also needs to redouble its efforts to make good on its promises of liberty, equality and fraternity for its Muslim citizens.