During the last part of the 20th century, the topic of HIV and AIDS was on the main stage of every news outlet in the U.S. and abroad. And for gay men, it was a source of constant fear and anxiety as well as the focal point for activism inside and outside of our community. Because of this, medical researchers were pushed to the fire to do whatever it took to make the death toll drop. And in the late 90s, the world finally took a breath and gay men didn't have to worry about which friend's funeral they should attend after anti-retroviral medications came onto the market. Since then, HIV and AIDS has faded out of the limelight as more pressing issues took precedent. But for gay men, as soon as HIV drifted away save for our worst of nightmares, and we allowed other issues to become more important, we once again gave HIV the chance to make a comeback.

It was during the election cycle of 2004 when the pendulum finally swung. The issue of same-sex marriage was on the tip of most American's tongues and both sides of the spectrum were on fire over homosexuality. I was sitting in my mother's living room, watching the Bush v. Kerry results slowly come in. Each update gave way to an irascible feeling of defeat. Not only was President W. Bush staying in office for another term, but also Texas, my home state, along with many other states, had passed a ban on gay marriage.

And out of the ashes of the 2004 election cycle, a new symbol finally eclipsed the little red ribbon that had been they predominate symbol of activism in the gay community. The image of the happy gay or lesbian family became the subterfuge for American media to act as is HIV was over and a new issue flooded the headlines. It was the moral majority vs. gay families and their allies, with clear heroes and villains for both sides to cling to. HIV programming was cancelled and gay marriage was must-see-T.V.

'Gay' was officially mainstream, and HIV was no longer the ominous death knell that it was just a decade prior. Even though many people living with HIV or who were at risk of becoming infected were still undereducated about prevention and care, the medication worked and that seemed to be good enough. 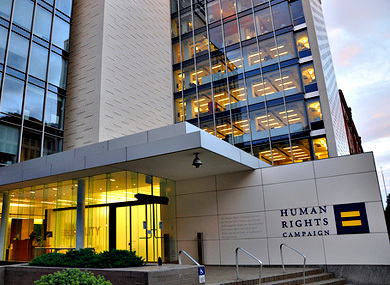 Similarly, Focus on the Family is a conservative evangelical organization founded in 1977 by psychologist, James Dobson. But in 2003, Dobson issues a statement during the 2004 election cycle about gay marriage, saying that the institution of marriage "...is about to descend into a state of turmoil unlike any other in human history." Similar sentiments were echoed by many other evangelical organizations, and the threat of gays spreading their gay germs, so to speak, was now also overshadowed by the threat of same-sex hand holding on top of a wedding cake. And organizations like Focus on the Family surpassed HIV as enemy number one.

One look at the 2004 HRC annual report provides glaring evidence that HIV/AIDS was entirely removed from the discussion of LGBT equality in the United States. Even in discussions around domestic partner health insurance coverage, the issue of HIV among the gay population was completely absent.

But it wasn't just HRC that caused the LGBT movement to direct their attention away from HIV. Popular movements such as the NO H8 campaign sparked the attention of gay youth. Businesses like Chik-fil-a, Walmart and Hobby Lobby took the place of the Food and Drug Administration and big pharma companies that were the previous targets of organized gay rage. And the Human Rights Campaign put virtually all of its chips on the table for gay marriage.

For the whole of gay culture, this was a major step in the right direction. Battle after battle in the state courts around the country, the same-sex marriage movement has proven victorious. The U.S. Supreme Court overturning of Prop 8 and DOMA helped change the tide in the court of national public opinion. For the first time, the majority of Americans believed that LGBT people deserved equal rights and the HRC has been marking off state after state for legalized same-sex marriage.

But these victories have come at a cost. When same-sex marriage became the singular virtual focus of the gay community, HIV virus received the break it needed to stage a comeback among gay and bisexual youth who were too busy fighting in courtrooms to worry about the bedroom.

Since gay marriage became the focus of the LGBT community, the rate of infection among gay and bisexual men has increased by a staggering 132.5 percent between 2001 and 2011.

Many older gay men shake their fists at this report, angry that these young boys would be so stupid to make this mistake after countless of their friends and lovers passed away from AIDS. But to elude any of the blame would be quite hypocritical, since the older generation is equally to blame for the shift away from HIV education and prevention once the wedding bells started ringing.

That is not to say that youth wasn't a major focus for many LGBT organizations. The Trevor Project, founded in 1998, is a national non-profit organization focused on suicide prevention efforts among LGBT youth. The organization gained mainstream notoriety in the late 2000's with multiple A-list celebrities, including Lady Gaga, Ellen DeGeneres, Katy Perry and Neil Patrick Harris, who lent their support through fundraising efforts and outreach events.

In 2010, outspoken LGBT activist, Dan Savage, launched the It Gets Better Project, a viral video movement with the mission to inspire LGBT youth that, well... "It gets better." The movement became an international phenomenon, inspiring 50,000 user-created videos viewed more than 50 million times. The project has also received massive celebrity support, with people like Kesha, Joe Jonas and Anne Hathaway making their own videos for the project. 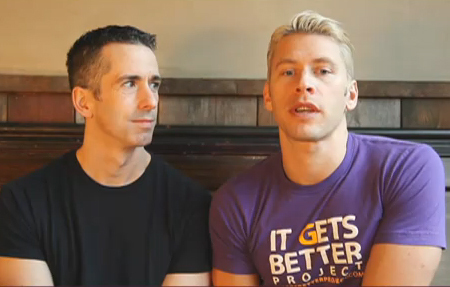 LGBT activist and founder of the It Gets Better Project, Dan Savage and his partner.

The Trevor Project and It Gets Better has made windfall change in how the LGBT community is viewed in society and how gay youth deal with their sexuality. But there is a stark absence in HIV programming and messaging that a young, newly HIV positive individual can relate to, and are still to afraid to talk about.

In 2012, the HRC Annual Report dedicated an entire page to the issue of LGBT youth. The organization highlighted the fact that over half of LGBT youth say they have used alcohol and drugs while only 22 percent of non-LGBT youth say they have. They reported that LGBT youth are profoundly more disconnected than their straight peers from their families, schools and communities. And the report claimed that non-LGBT youth are nearly two times as likely as LGBT youth to say they are happy. But starkly absent from the LGBT youth page is the fact that young gay and bisexual males make up 69 percent of new HIV infections among persons aged 13-29.
Specifically, the CDC reported that, "Young MSM may be at risk because they have not always been reached by effective HIV interventions or prevention education--especially because some sex education programs exclude information about sexual orientation."

Now that sounds like a human rights issue that deserves some national attention.

Luckily, HRC has now partnered with the Greater Than AIDS to release a comprehensive resource guide, which focuses on prevention and treatment for the LGBT community. And if HRC was slow to take up the reigns of HIV awareness in the past, they are now leading the charge with other progressive organizations such as the San Francisco AIDS Foundation and the World Health Organization in recommending the use of Truvada as PrEP for people who are at-risk for HIV infection.

HRC, the Trevor Project and the It Gets Better Movement are just examples, or merely symbols of the priority shift that took place once impending death did not come with an HIV diagnosis. There is no one person or group of people responsible for the rise in infection; the entire community is liable for letting their guard down. But now we have an entire generation of young gay and bisexual youth who are completely under prepared to battle an enemy that we know how to beat.

It would be great if LGBT media programs and gay and bisexual civil rights movements could skirt the HIV issue all together. But you are only as strong as your weakest player, and with a 132.5 percent increase in HIV infection, the team is looking pretty weak. Of course, there are organizations that focus solely in the issues of HIV prevention in youth. But it's the responsibility of any LGBT youth organization to make HIV prevention a part of the discussion.

Even though HRC, and many other gay rights organizations have racked up many trophies in the past decade when it comes to treatment and condition of the LGBT community, this number represents a glaring stain our exemplary record of progress. It is time to, once again, make ending HIV a top priority within the gay community. Gay marriage and equal rights are central to the progress of our community, but these victories aren't anything if part of our people is silently suffering from a preventable disease while others rush to the aisle.