Recently my 6-year-old daughter came home from school and said something that surprised me.

I found myself growing unexpectedly defensive. "You're not a tomboy," I replied. "You're a girl who likes sports... and princesses, and science camp, and fashion, and anything you want to. You don't have to be a boy to like sports, just like you don't have to be a girl to like dolls. Girls can like anything they want to. There's no such thing as a tomboy."

My daughter nodded and began jumping on my bed.

I wasn't sure why I was so worked up about this seemingly innocent term. After all, I'd been guilty of using the label "tomboy" too; in fact, I was pretty sure I had once described my athletic niece as such. But that was before I knew better.

Before, at age 4, my daughter was nervous to wear her new Teenage Mutant Ninja Turtles backpack -- despite her nightly dances around the living room, bellowing out the theme song -- because she worried the other kids would tease her for wearing a "boy" backpack.

Before she came home upset because that's exactly what happened.

Before, at age 5, she informed me that boys are faster and better at sports than girls -- even though she could outrun many of her male counterparts and was even starting to outpace her father on occasion.

Before, at age 6, she started telling her 3-year-old brother which toys he shouldn't play with because they're "for girls." 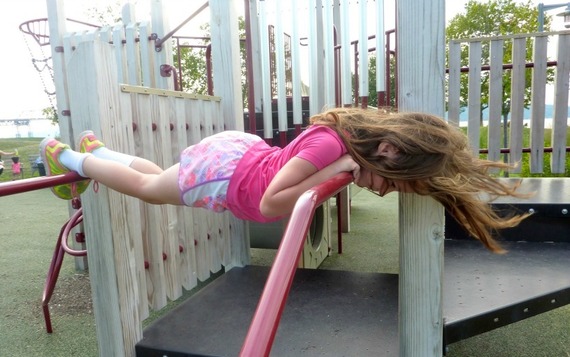 We've done our best to avoid these types of gender stereotypes and limitations. We've encouraged her to play soccer and basketball, and to race and climb. We've enrolled her in science camp each summer. We've encouraged all of her interests, from playing touch football with her cousins to operating a lemonade stand to caring for her ever-growing collection of Disney princess dolls. And somehow, this notion that she's limited by her gender -- that there are things she shouldn't like or can't excel at -- still permeates this bubble of infinite possibility we've tried to create for her. And so, hearing her call herself a tomboy frustrated me.

When my husband came home, I got on my soapbox and ranted about this outrage and how I had attempted to correct it. He seemed to understand my point of view. "She's not a tomboy," he declared. "She's a person."

And yet that wasn't appeasing me either. Yes, it's logical to say that we're all people, and gender shouldn't come into play. Of course my daughter's a person. But she's also a girl. And, like it or not, girls reach a certain point where they become young women. I remember those awkward adolescent years, when I began worrying about my appearance, and fitting in, and, of course, boys. I wanted people (boys) to see me as a girl. I wanted to be feminine -- even if I wasn't yet sure what that meant, exactly.

Which is why I want to broaden my daughter's definition of what a "girl" is. I don't want her to think that she has to trade her femininity for a soccer ball. Why can't it be feminine to use her body to race against the wind, to push herself to her limit as her sneakers pound the pavement, and she soars ahead of her competition? Why can't it be feminine to enjoy the feel of chlorine against her skin as she tears through the pool, or the cheers of the crowd as the ball releases from her fingertips and swoops into the basket? Why can't these things be just as feminine as makeup or fashion? Why should she have to be a "tomboy" to enjoy sports, or "act like a man" to succeed in business?

My daughter is already starting to understand that she's growing up, and womanhood is around the corner. She's going to get a lot of pressure from society as to what that means. But now, she's still little. And so it's my responsibility to teach her that being a girl isn't just about dolls and princesses, but also soccer, and rock climbing, and science and math. It's about being true to herself and following her passion -- whether that leads her to the red carpet or the basketball court.

The reality is that my daughter already defies conventional labels like "girly girl" and "tomboy." She's a girl who climbs trees in tights and pink party dresses. When she runs her first marathon, she may do so in a ball gown.

And I'll be right there, cheering on my girl.

More:
MotherhoodParentsRaising Girls voicesmothers and daughters
Newsletter Sign Up
Raise the kind of person you'd like to know
Subscribe to our parenting newsletter.
Successfully Subscribed!
Realness delivered to your inbox