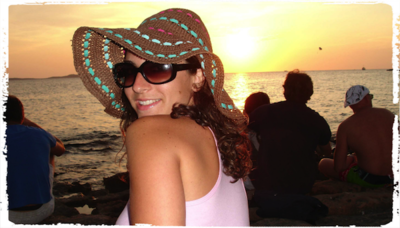 I have been traveling on and off since my late teens. And I recently came across an article about why it is a bad idea to date girls who travel. Ouch! Apparently, it has gone viral and been translated into six languages because it resonates with so many. And as I read it, I find myself simultaneously offended and utterly flattered.

The essay (written by a woman) reads as a cautionary tale for young bachelors. It says, "Don't date a girl who travels. She is hard to please. The usual dinner-movie date at the mall will suck the life out of her. Her soul craves for new experiences and adventures."

Check out the piece itself -- but also read this one I wrote in response, or rather as the reverse cautionary tale, for young women who travel. When I was a traveling "girl," I dated a non-traveling guy or two and it was tough.

So, bear with me as I carry on in the spirit of the original post, generalizing and stereotyping all the way. Here goes...

Don't date a boy who doesn't travel. He's trapped in the safety of his routine habits. He doesn't like to try new restaurants or order something he doesn't know he already likes on the menu. He shuts down when you try to mix things up.

Don't date a boy who doesn't travel because when your favorite foreign band is in town he won't want to go. He will listen to the same music his whole life and he will quote the same movies. He will think there is only one clear and sensible path to follow -- that there is only one way to pursue a career.

Don't date a boy who doesn't travel. He will perceive your commitment to it and experiencing new things as a weakness and telltale sign that you are lost with no direction and no plan. He won't understand that the plan is to travel, to really find yourself and your passions and then build a life around what brings you joy. What he doesn't understand is that women are nesters by nature -- and that at some point you will settle down to create a flourishing home life.

Don't date a boy who doesn't travel. He'll think that it is his job to impress you when what you really want is someone who gets you -- who will go on long walks through foreign cities, get lost with you only to find yourselves closer together. He will think that it is his responsibility to perform. But what you really want him to do is just let go -- to turn off the rest of the world and be fantastically present in beautiful moments shared together.

Don't date a boy who doesn't travel. You'll have to beg him to travel with you -- explain to him why it makes sense to spend money on experiences rather than the latest gadgets and gizmos. You'll have to coax him into getting off the beaten path or avoiding the cruise ships. You'll have to endure that puzzled stare when he realizes he has no idea how to be as brave as you.

Don't date a boy who doesn't travel. He will feel emasculated and confused that he doesn't know how to control you. He won't understand your desire to experience the unknown. And thus he will feel like he is irrelevant to your happiness (when you know he is essential to it). And that will pierce a big fat hole in his ego.

Don't date a boy who doesn't travel because he has chosen a rigid and controlled life. He thrives on staying nailed in his box. He doesn't take his vacation days and when he does he plans for a staycation or a trip to the same location as before. He thinks his way of living life is the only right way to do life. He won't be able to see the infinite possibilities out there. He won't even realize how sheltered and small his world is. And while it is not bad to have simplicity and commitment to routine -- you know he's missing out on some real joys. You know that if he could bare to get himself out of his comfort zone for a minute he might find a whole new passion that leads him to a more fulfilling life.

Don't date a boy who doesn't travel because you can't turn him into one who does. Nor can you make him really understand you. You'd be wasting your time -- building your life with someone who might one day succeed in cramming you into his limited box.

Don't date a boy who doesn't travel because you should not settle.


Disclaimer: I am well aware that this post is totally biased and rather impractical given that not every person has the means or freedom to choose a traveling lifestyle. You can also define a traveler as not just someone who travels but someone who lives like a traveler -- with desire to learn and experience new things regularly even at home.