Whenever I talk about why research for metastatic breast cancer is so important for me, I typically post this picture, which was obviously taken when I was just a wee one. 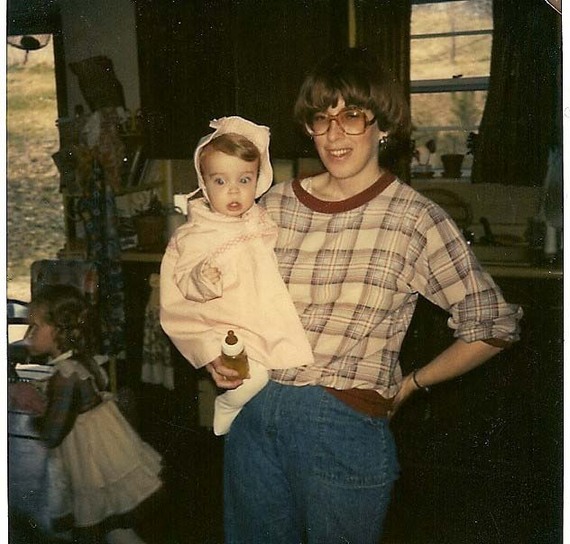 When I have mentioned that my mom died of breast cancer and then I post that picture, it recently dawned on me: "Huh, I wonder if anyone seeing this picture thinks that she died when I was a baby, not when I was in the second grade." That's what got me wondering and subsequently asking my dad, "Hey, are there any pictures of just me and mom?"

My dad could only find two pictures, and it wasn't any posed pictures of mother and daughter, it was two stolen moments that my father, an amateur photographer, caught. He tried to explain why and how this happened, "Well, she didn't like to have her picture taken." For the first time in a very long time, I felt really mad at my mother.

Someone reading this might think, "Well, the 80s were different. It's not like nowadays where everyone has a camera phone and it's selfies 24/7." My dad has been an amateur photographer since his 20s, and he usually had his camera nearby. My dad is the guy with the camera. He sure as heck brought it to family events. My mother dodged the camera. She scowled and protested at my dad when he tried to take more pictures. My mother was well known for her camera avoidance. 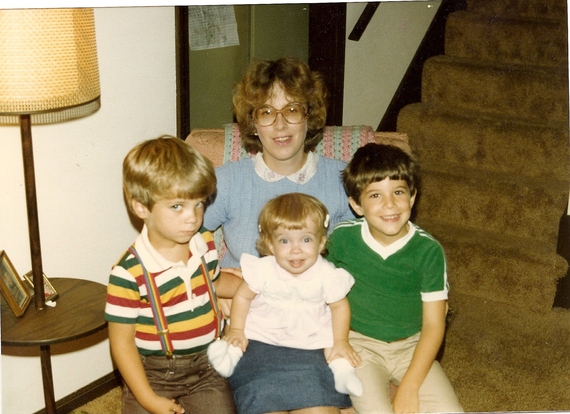 Ever the peace keeper, my dad's response when I expressed disappointment via email regarding the lack of pictures of mother and daughter: "Memories can be sharper than images." She died when I was 7-years-old. I do not have memories of her -- they are more like snippets. Plus, the snippets I have of my mother are from when she was sick from cancer treatment (oxygen tubing, hospital visits, wigs), not as the mother she probably wished I remembered her as.

As a 33-year-old woman, the thought of being mad at my mother is so foreign to me. Like, real, justified adult anger at a very deceased woman. I feel pissed at her for not getting over her hatred of being photographed and just sucked it up. I wished she would have said to my dad, "Hey, grab the camera. Take a picture of Lara and me." Nope, she didn't do that. She ducked and dodged my dad's camera like he was a landmine she didn't want to step on.

In her defense, she was sick for a long period of my life from ages 2 to 7, but I would have still cherished a picture of my mom hugging me, showing some sort of maternal affectionate for her only daughter. Some tangible proof that she was here and she loved her daughter, a daughter she worried (according to a friend of hers) would also have breast cancer. I wouldn't have cared in the slightest if I had pictures of my mother when she was sick if I was in the picture, too. Her illness was a part of our lives, but I imagine that's not something she wanted my dad to capture.

When she disappeared from the pictures, she disappeared from the events that took place. One of the snippets I remember from a family vacation we took the summer before she died took place at a go-kart place in Panama City Beach, Fla. My brothers were each driving their own go-kart, and I was in a go-kart with my dad (since 7-years-old are not allowed to drive those things). My mother stood off to the side, watching us and hanging out by the railing. She wasn't participating, just watching. When I think about that memory, it makes me sad because I have wondered if she was just disappearing right then and there. My mother disappeared from my memory, and now she's been this abstract figure in my life, as tangible as a dream.

My plea to parents, and this goes to anyone really, don't disappear from the pictures. Who cares if you think your hair is frizzy or you have a "weird" smile or whatever hangup or lie that we tell ourselves, and don't want to be in the pictures? When you have children, forget all that and just get into that picture. Smile. If you are the one usually taking the picture, because as the photographer at events I know how easy that can happen, then hand the camera off to someone! Strangers are usually cool if you ask them, "Hey, can you take a picture?"

I'm not 100 percent sure why my mother avoided having pictures taken while she was sick. Maybe given her hatred of the camera before cancer just meant that the hatred multiplied by 100 after her diagnosis? Maybe she thought if she didn't let my dad take pictures of her bald or with a horrible wig on or other hospital-related scenarios, that we wouldn't have to remember a horrible time in our lives. Guess what, we still do. Whatever it was, she did a disservice to me, her youngest child. I was robbed of my mother, and then my mother robbed me of the ability to have a precious keepsake of just her and me.