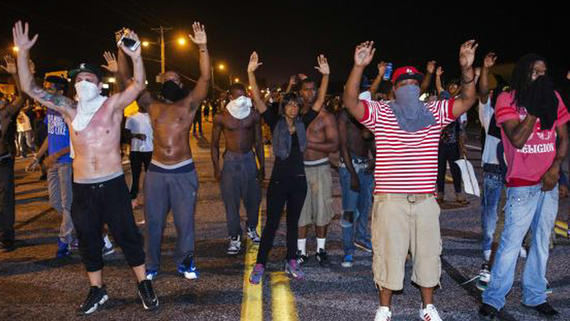 The appearance of heavily-armed men in Ferguson on August 11 has caused considerable unease among Black Lives Matter (BLM) protesters and the police in the city. Protesters have told them that they are not wanted. Even the police, while grudgingly accepting their presence as lawful, have said that their presence is "unnecessary and inflammatory". Indeed, the protest movement has framed them as part of the alleged government-sanctioned white supremacy, noting that blacks would not be able to openly carry similar arms without a violent response from the police. The Oath Keepers' goals are likely to be more in line with the protesters' own objectives than the protesters would expect. However, protesters must remain wary of how the group's libertarian message will detract from the BLM's own messages, given the Oath Keepers' far-right ideology.

In the first hours of their appearance on the streets of Ferguson, multiple news agencies were unable to obtain an official response from the group, leaving the purpose of their presence ambiguous to the nation at large. Under the police brutality vs. African American community paradigm, or police vs. looters paradigm, depending on your political preferences, they have previously sided with law enforcement officials.

Late last year, they patrolled businesses and apartments as part of a voluntary security force to defend against the looting and violence during the protests. They eventually stood down after being ordered to do so by local police as they were providing security services without a license.

However, interviews with local Oath Keepers have told a different story for their appearance this time. The Washington Post reported that the men are in the area to protect a reporter working for the far-right and libertarian website InfoWars, and interviews from InfoWars have portrayed them as individuals siding with the protesters with a bit of a right-wing twist.

They stated that they are there to keep InfoWars reporters safe, perhaps in light of the arrests of Huffington Post and Washington Post reporters this past week. Furthermore, they expressed dismay at the fact that Republicans failed to mention police brutality as an issue in their debate on August 6. They urged protesters to exercise their Second Amendment rights to produce a "safer society", and raised other issues like the potential benefits of a flat consumption tax--ideas, that when fact-checked, don't stand up to critical scrutiny (e.g. for every "justifiable gun homicide" in 2012, two accidental gun deaths, 34 criminal gun homicides, and 78 gun suicides occurred; furthermore, most guns used in mass shootings have been obtained legally).

Their motives do not appear to be part of an attempt to undermine the Black Lives Matter (BLM) movement. In fact, police brutality is a point where both the libertarian ideology and BLM coincide with one another. Should the protesters come to view this right-wing perspective as a potential ally in their fight against police brutality, the de facto cooperation might interestingly realign local actors, tying Second Amendment rights and conservative taxation policies to the fight against racism and an out of control police force.

The problem, however, is that the Oath Keepers' ideology is still fundamentally different from the Black Lives Matter movement. BLM seeks to produce change by working within the democratic system through awareness campaigns. The Oath Keepers, while being a decentralized group composed of individuals with wide-ranging conservative views including birther conspiracy theories, ultimately proposes that armed insurrection might be necessary, especially in this day and age of an allegedly "tyrannical" government, to reset the country back to a "truly" democratic system. Stewart Rhodes himself, in an interview with Alex Jones, has indulged in conspiracy theories on the idea that President Obama might stage a 9/11 style event to extend his presidency through emergency powers.

The side-goal of a potential armed rebellion isn't just theory among right-wing groups. While Duke University reported an average of nine annual Islamic terrorist attacks resulting in 50 fatalities since 9/11, West Point's Combating Terrorism Center has reported an average of 337 right-wing terrorist attacks per year and 254 fatalities since 9/11. The Global Terrorism Database of the University of Maryland also recorded just 24 Islamic extremist attacks on the US homeland since 9/11 while noting 65 right-wing terrorist attacks over the same period. The right-wing ideology, as shown by these data sets, has been more violent in the US than the widely-covered Islamic extremism that supposedly poses an existential threat to the US.

The other causes endorsed by the Oath Keepers, like Second Amendment rights and flat consumption taxes, ignorant of the statistics on gun control and tax incentive economics, will similarly tie the Black Lives Matter movement down as it seeks to fight against racism and police brutality.

The Oath Keepers movement has consistently danced around the ambiguous line on treason, with its calls to disobey orders it considers to be unconstitutional and its calls for an armed insurrection, without ever noting a realistic point where armed revolt is warranted. Should they turn violent as hundreds of right-wing lone wolves have in the past, as an armed group fighting for political goals, not on behalf of a state, they would be categorized as the domestic terrorist group the Department of Homeland Security has repeatedly warned Congress's deaf ears about.

The BLM movement needs to continue nonviolent civil disobedience to evoke the change it seeks to fight for. Tying BLM to a potentially violent movement, however politically convenient this may be over the short-term, would delegitimize BLM and may radicalize individuals when an escalation of violence would forever taint Black Lives Matter's cause.