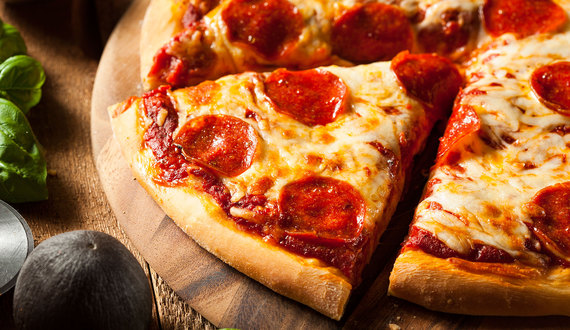 It’s 9:30 on a typical weekday night. Maybe you’ve just rolled in from work, or maybe a workout (damn you). Maybe you’re already sprawled out on the couch, remote in-hand, Netflix streaming.

Suddenly it hits you — you haven’t eaten since lunch, and you’re starving. You reach into the freezer, grab a frozen pizza or a leftover slice and chow down.

Bad idea. You've just created the perfect environment for disrupted sleep, owing to our stomach's skilled ability to pump out acid at the first sign of food. Fact is, whether we’re home or out to dinner, plenty of us end up eating late at night. But if you’re prone to heartburn, a symptom of acid reflux, chowing down too close to bedtime is the worst thing for you. Considering acid reflux affects an estimated 30 percent of the population, this may be you.

What exactly is acid reflux?

Once considered a side effect of being an overweight, middle-aged white man, reflux now cuts across generations, class and gender. Today, more young adults are being diagnosed with the condition, and the medical community has deemed it an epidemic.

“Acid reflux describes what happens when the contents from your stomach flows backward up towards the esophagus and throat,” explains Jonathan Aviv, MD, clinical director of the Voice and Swallowing Center for ENT and Allergy Associates in New York, and author of Killing Me Softly From Inside: The Mysteries & Dangers of Acid Reflux and Its Connection to America’s Fastest Growing Cancer (2014).

“It’s when the lower esophageal sphincter, a circular band of muscle around the bottom part of your esophagus (the tube that connects your stomach to your throat), doesn’t close properly once your digestion ramps up, so your food, drink, and stomach acid don’t stay where they belong.” When you hit the sack right after wolfing down those late-night fajitas, it’s easier for them to head back up.

It actually takes the stomach three to four hours to empty out. When you lie down immediately after a big meal, not only is your stomach still churning out hydrochloric acid, an entire acidic food mixture is just sitting there.

“Lying down when your stomach is still full makes it easier for whatever’s in there to head up the wrong way,” says Aviv, who’s also clinical professor of otolaryngology at the Icahn School of Medicine, Mount Sinai. “It can even reach your lungs and vocal cords.”

This sounds unpleasant. I just want to go to bed.

Not only is “backflow” an unpleasant way to be awakened, once it hits the throat you’re left with the cringe-worthy taste of regurgitated food or sour liquid.

It’s also dangerous to your health. Reflux can lead to esophageal cancer, which is “the fastest growing cancer in America and Europe, increasing by a whopping 650 percent since the mid 1970s,” according to Aviv. Tiffany Monique Riddick, one of Beyonce’s trio of background vocalists, was recently treated for esophageal cancer.

Other complications include lung and breathing problems, and sleep apnea.

Not necessarily. Our three best pieces of advice:

If you have reflux, avoid highly acidic foods such as soda, white wine, citrus and even bottled iced tea. (Many brands contain citric acid or ascorbic acid, which Aviv likens to industrial strength cleaners.) Consider cutting down on tomatoes and vinegar, too, as they’re highly inflammatory.

Certain foods can aggravate acid reflux, even though they themselves are not very acidic. Caffeine, chocolate, alcohol, mint, onion and garlic all relax that lower esophageal muscle that keeps your stomach’s contents in their place.

What about sleep positions?

Certain sleep positions can help. Sleeping with your head elevated reduces the amount of acid that comes up from the stomach at night, and a wedge pillow is a trusty option.