This year has made us sick. At basically every turn, 2016 forced us to reckon with toxic masculinity, bullheaded (and barely even coded) misogyny, and the seemingly endless coddling of rape culture. And then, at the end of it, as if to put a rotten cherry on the top of a shit sundae, we voted the physical manifestation of all of those challenges into the White House.

It's hard not to feel overwhelmed. It's hard to know where to start. We've been thinking about it and talking about it constantly, and one of the simplest, most gratifying and empowering responses I can think of is for all of us to just stop giving those people pleasure. Don't fuck the patriarchy. 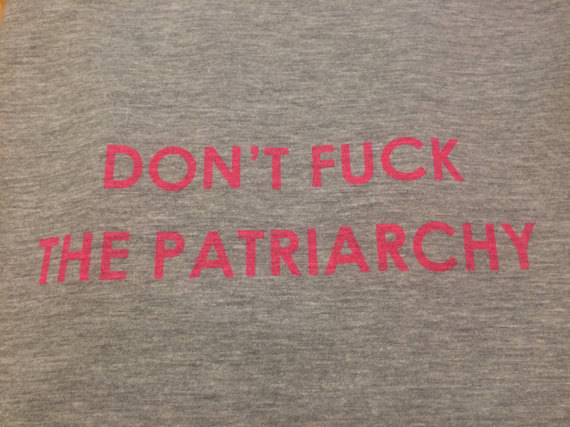 I can't believe that even saying this is necessary, but just to be clear: I am not saying "don't fuck men." I don't hate men and I don't want civilization to grind to a halt. I'm a queer woman who is married to a man. I have fucked lots of men, some of whom deserved it, and some of whom didn't. I AM saying don't fuck people who profit off of your disenfranchisement. I AM saying don't give pleasure to someone who doesn't respect your right to exist. This message isn't just for women, it's for anyone who fucks men.

If someone defends a rapist, instead of a rape victim, DON'T FUCK THEM.

If someone doesn't respect women's right to equal pay, DON'T FUCK THEM.

If someone says "no fats, fems or Asians," DON'T FUCK THEM.

If someone doesn't think women should talk about, enjoy, or pursue sex, DON'T FUCK THEM.

If someone tells you that "actually, all lives matter," DON'T FUCK THEM.

If someone tells you that hateful legislation is there for your protection, DON'T FUCK THEM.

Like all great movements with catchy slogans, we made a t-shirt. Now, old world fuckboys with antiquated ideas about how other people should act, look or speak will see you coming, without you even having to say a word. All profits from the sale of this t-shirt will be donated to Planned Parenthood.

Sex is something that nearly all adults have in common. That gives you the power to decide who you share your body with and who you don't. Rise up, speak out, and only fuck nice people who respect your right to exist.