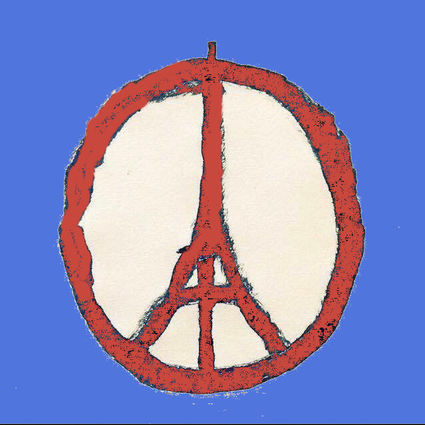 What France, the United States, and other Western nations should do in response to the unmitigated evil that was perpetrated by terrorists, apparently associated with ISIS, in Paris on Friday is not at all clear.

But one thing should be absolutely clear: What Western nations should not do. The guiding principle must be "Primum non nocere" ("First, do no harm")

The starting point must be to resist giving in to the natural instinct to go more deeply into war in the area the self-styled "Islamic State" controls in Iraq and Syria:

■ One would think that most of us could agree that the last thing we want to do is what ISIS wants us to do. Sparking a larger war that they can portray as one of Islam vs. the West is precisely what ISIS most desires. They cut off people's heads and commit other horrible atrocities in order to suck the West into a war that they hope to sell to Muslims around the world as a new Crusade in which all followers of the Prophet must join with them to fight "the Infidel."

"The result of these attacks," the ISIS communiqué issued after the monsters struck proclaimed, "was the death of no less than 100 Crusaders." Crusaders? Few people will buy the ludicrous identification of people at restaurants and musical performances as crusaders . . . unless the West responds to the attacks by launching a war that ISIS can portray as a crusade against Islam.

■ We must not let our horror about the barbarous attack in Paris lead us to make the same sort of catastrophic mistakes that Dick Cheney, Donald Rumsfeld, and the president they disserved made when they sold the nation of a bill of bads on the need to invade Iraq and overthrow Saddam Hussein. There can be no serious question that it was that cataclysmic misjudgment that started the chain of ruinous events that led to the rise of ISIS and produced the horrible situation that exists today.

Sen. Dianne Feinstein (D-CA) and numerous Republicans are dead wrong when they say that we must get more involved in Syria and Iraq. Be assured that the ISIS maniacs are elated when they hear Americans and others in West say such things.

After 9/11 we often heard variations of "If we change our way of life, then the terrorists will have won." Yet we did change our way of life, giving a victory to the terrorists. Our government launched an unnecessary war of choice that destabilized the region, cost us a couple of trillion dollars, nearly 4,500 American lives, and the destruction of the lives of many more who survived. The results?

■ Iranian domination of Iraq. Anyone with any sense understood at the time that this would be the inevitable result of the American toppling of Saddam. As I wrote then, "So remember, in future years if someone asks who won the American war in Iraq, the correct answer will be: Iran."

■ The rise of ISIS. Removing Saddam, prohibiting the Baathists from remaining in the military and security forces in Iraq, leaving American forces in Iraq for years, and many other disastrous policies pursued by Cheney and Company were directly responsible for creating both the vacuum that ISIS filled and the conditions that led many to follow them.

So, what we should not do is clear--though that doesn't mean that we won't go ahead and do it. I fear that, in the words of Mike + the Mechanics, we'll be "taken in, taken in again."

Understand that going back to war in the region is not going to eliminate ISIS--it is far more likely to help them recruit more terrorists. Given this reality, we must concentrate our efforts on counterintelligence, counterterrorism, and policing activities.

ISIS must be liquidated, but the on-the-ground forces that do it will have to come from other Muslim nations in the Middle East. The policy of the United States and other Western nations must be to insist that Turkey, Saudi Arabia, the Gulf States, and others provide large-scale ground forces to do the job. Those nations have to be told that we are no longer going to do their fighting for them and that we'll pull out entirely if they fail to step up militarily. If they do, the United States and other Western countries will offer them much logistical and intelligence assistance, but it's their backyard, they have the large military forces to do it, and do it themselves they must.

Such an announcement from Western governments, while it would be portrayed both by ISIS and by right-wing politicians in the United States and Europe as "surrender," is in fact the worst nightmare of ISIS, since it would undermine their narrative of the West launching a "Crusade" against Islam.

Lyrics from another song, The Who's "Won't Get Fooled Again," express my fervent hope:

Then I'll get on my knees and pray

We don't get fooled again