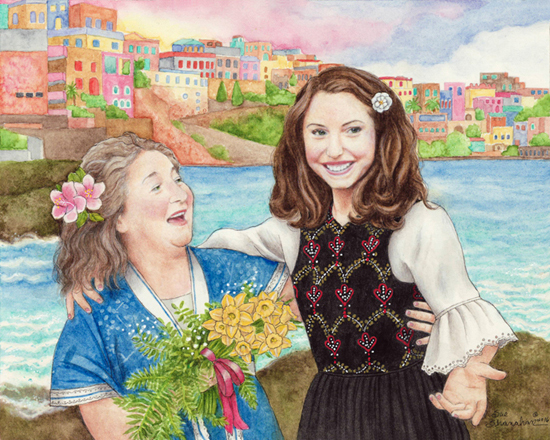 "Creative minds have always been known to survive any kind of bad training." -Anna Freud

I've made a practice of gleaning wisdom and support from women I admire. Because my mom was not the "in your corner" type, I learned to do this at a young age. Growing up under her tutelage forced me to figure out ways to get my need for nurturing met. My search led me to reading books with omniscient mother figures and happy endings. It's no accident that as a child Cinderella was a favorite story of mine. That evil stepmom may have been in control for a time, but she was no match for the powers of a fairy godmother. By fifth grade, I had graduated to being utterly taken with Marmee, the mother of the March sisters, in Little Women. Her steadfast devotion to her girls was the launching pad for them to live their dreams. Somehow reading about the security of unconditional love was healing to me.

In my twenties, I discovered how author Maya Angelo mothered Oprah Winfrey. Her love and wise council helped Oprah to become her "best self." I began studying other strong women who pointed their daughters in the right direction. I embraced the relationships of Eunice Shriver and her daughter, Maria, Dorothy Howell Rodham and her daughter, Hillary Rodham Clinton, and finally Elli Stassinopoulos and her daughters, Agapi Stassinopoulos and Arianna Huffington. All of these mothers inspired me and gave me a lead to follow. Since I considered them as more than mentors, I christened them fairy godmothers. Remember the sparkle Cinderella's fairy godmother brought to her life? She gave the added magic needed to help Cinderella leave behind the cinders she made her bed in. That's what these mothers I admire did for me.

One of my favorite of the godmothers is Elli Stassinopoulos. In my painting above, she's pictured with her daughter Agapi on Agapi's 16th birthday. I first read about Elli in Agapi's book, Unbinding the Heart. Elli was a remarkable woman. She was not accomplished by the world's standards and yet gave much to the world. Her daughters are living proof of that. Elli knew what was important in life. It was people not things that mattered. There was no hierarchy in her world. She treated a government official and a plumber with the same warmth and generosity. She never allowed her daughters to feel "less than." She knew that both of them were born with the gifts needed to fulfill their life's purpose and she stood in support of that. Reading about Elli made me think of how much easier my life would have been if I were raised by a mom like her. My soul would have known its worth, instead of having to fight for it every step of the way. Getting to know Elli helped soothe what I lacked. 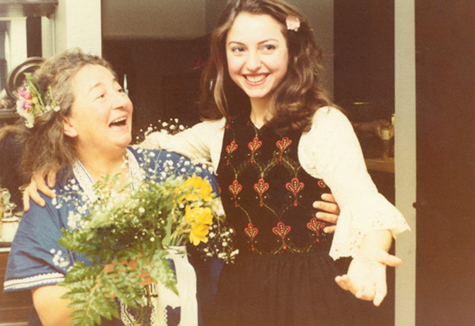 The photo I based my painting on.

I reached out to Agapi for permission to work from the photograph I based my watercolor on. Elli reminded me of the fairy godmother in Disney's Cinderella in the picture. Agapi was kind enough to grant her consent and even gave her thoughts on the art in progress. All along she was pleased that I was capturing her mom's spirit. What she was having trouble with, was my portrayal of herself. We both knew something was off. Was it her eyes? Or her smile? She could not pinpoint it and in my revisions neither could I. Finally, in frustration, I thought to ask Elli for help. I reasoned that since she had passed away in 2000 she would have the clarity of a higher vantage point. As soon as I sent out my request, I got the distinct feeling to have a glass of red wine and stop trying so hard. I should just relax and enjoy the process. I did just that and had fun tweaking the piece. In a flash, I was done and satisfied with the results. When I sent a file of it to Agapi, she responded,"It's great!" I smiled as I wondered why I hadn't called on Elli sooner. Of course she would want me to do justice to her girl.

In my life, I've found that within every hardship there are always blessings. I believe I was given the perfect mother to help me become who I was born to be. Without the difficulty of being raised by her, I don't think I'd have the insight and compassion I do today. Plus, I may have never discovered the wisdom of these beautiful women I call fairy godmothers. I've studied and absorbed how they moved through life. Their philosophies have become my philosophies. Today, I'm happy to say I share their wise council with others who've been gifted with moms similar to mine. In this way, even though my fairy godmothers no longer grace the planet, their magic goes on and continues to break the spells that others live under.