Some think what's good for General Motors' Hummer is good for the U.S.A. Do you?

Consumerism and buying preferences are a complex mix of rational and less-than-rational decision-making. Concepts of self-identity certainly play an important role. How else can you explain the ubiquity of tee shirts pronouncing a company or university logo or even some iconic symbol or quirky phrase? 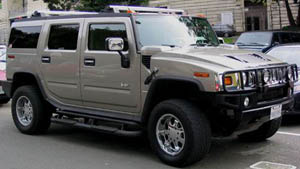 But it doesn't stop with identity; social scientists have found that consumer choices are also influenced by moral preferences. That morality plays a role in buying decisions is not surprising; in fact it seems appropriate. What is surprising is that these moral considerations can take on mythic proportions whereby a consumer's purchase of a product becomes conflated with the defense of "sacrosanct virtues and ideals from the transgressive actions of an immoral adversary," as a recent paper published in the Journal of Consumer Research (JCR) puts it.

The Hummer was introduced to the market in 1990 (by mail order only at the start), as a smaller version of the HUMVEE, the hero vehicle of America's military victory in Operation Desert Storm. Since then, the Hummer has become iconic in the debate between right and left, environmentalists and libertarians, and so forth.

Yes, as you might suspect, the conflict is a part of the larger culture wars that have embroiled our country in recent decades. But according to that JCR paper, by Marius K. Luedicke of the University of Innsbruck and colleagues, there is a strangely, at least in my opinion, jingoistic twist to the Hummer conflict.

The moral themes cited by those who oppose the Hummer are not surprising -- at their heart is an opposition to what is perceived as an overly consumerist and materialistic society. According to the authors:

Hummer condemnations reproduced many of the deﬁning themes and motifs
that have historically characterized the aforementioned ... [stance] ...
against consumerism and most particularly its demonization of
conspicuous consumption as a sphere of proﬂigate waste that posed
immanent threats to the common good.

Is there an anti-American theme to this Hummer criticism? I sense an implicit critique of the American "way-of-life," but it's hardly, in my opinion, anti-American. No more anti-American than those who rail against, for example, the permissiveness of our society or the fact that men wear their baseball caps indoors. (In fact, the creators of the anti-Hummer site fuh2.com cite some arguably pro-American rationales for their distaste of the vehicle: it's a "poseur" vehicle, a "gas guzzler" that is exempt from fuel-efficiency standards, a "polluter," "death machine" and "tax loophole.")

But for the defenders of the Hummer-life, the issue is a question of patriotism:

Self-proclaimed Hummer owners ... assail [opponents of Hummers] for
being un-American, terrorist sympathizers, tree-hugging socialists, and
a host of other epithets, which challenged Hummer critics' commitment
to true American values.

According to the authors, Hummer owners see themselves as a beleaguered group of patriots trying to protect the American way in a time of clear danger.

Whereas critics of the Hummer often assume that its owners are seeking security in a literal fashion (e.g., this big, tank-like vehicle makes me feel safe), ... Susan, like many of the Hummer enthusiasts we interviewed, employs strength in a far different, Jeffersonian sense: the Hummer reﬂects the strength of a people united by the values of American exceptionalism. In this framing, prototypic Hummer critics (environmentalists and intellectual elitists) are portrayed as being hypocritical and as subtly undermining the unity that enables the nation to stand strong against external threats. ... Hummer owners ... cast themselves in the role of heroic protagonists who are standing up to their critics' un-American (and morally suspect) activities.

Patriotism in a country like ours is to be expected and appreciated. Preference for a given type of car is also the norm. Decisions to "buy American" when purchasing a car are understandable. But conflating a specific type of car and patriotic duty makes no sense to me.

To what extent does a company, in this case General Motors, foster an association in peoples' consciousness between its product and patriotism? American automobile manufacturers, we often hear, don't make fuel-efficient cars simply because American consumers don't want them. But to what extent is it true that American consumers don't want fuel-efficient cars because American car makers convince them that gas guzzlers are "American" or manly or sexy? Is it just a coincidence that many American consumers choose to the buy the types of cars that give automobile manufacturers their largest profit margin?

And for those Hummer owners: Individualism? Fine. Freedom of choice? OK. But how is it patriotic to encourage our sending more than $350 billion to foreign countries a year, many of them hostile to our way of life, to import the oil that powers your gas guzzlers?