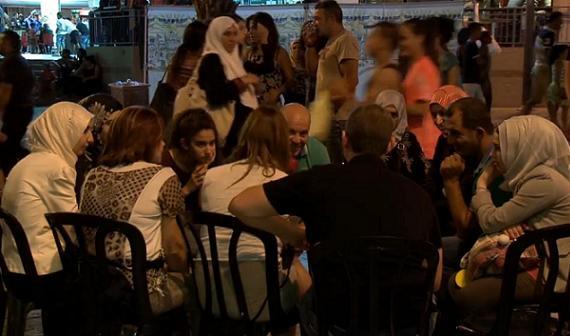 The scare over the strengthening of ISIS, and its growing appeal to youths in Europe and the US, should be a wakeup call for all of humanity, every man woman and child who are concerned enough to look in the mirror and reflect on who we are, what we have become, and how we want to continue henceforth. The majority of people who are joining ISIS and other terrorist groups are very young, often in their teens. If we want to understand what causes young, intelligent individuals to make such radical decisions we need to look at the social atmosphere in which young people live today.

Today's youths are coping with an impossible schism of connection alongside loneliness. On one hand, they are hyper-connected, each with usually several accounts in social media, virtually unlimited access to unchecked online information, generally lax monitoring of parents and/or school administrators, and easy access to often substantial resources.

Despite this intense connectivity and almost non-stop communication among them, youths today often feel alone, isolated, and even hostile toward society. Psychologists Jean M. Twenge and Keith Campbell describe youths in our generation as "increasingly narcissistic." In their book, The Narcissism Epidemic: Living in the Age of Entitlement, which focuses on American youths but which I believe is indicative of Western youths everywhere, they explain that "The United States is currently suffering from an epidemic of narcissism." Worse yet, "The rise in narcissism is accelerating, with scores rising faster in the 2000s than in previous decades."

It follows that on one hand, youths are being pulled toward each other by the human need to connect and to bond, and on the other hand they are being pushed away by their growing self-absorption and alienation from one another. Trying to eat the cake and leave it whole drives them to detach from one another physically, but connect to one another virtually, leaving them denied of both real connection, and real isolation (as is evident by the powerful impact that online bullying can have on teenagers). Instead of having both privacy and connection, they often feel that they have neither.

The inability to reconcile the conflicting trajectories within them frustrates them, and they often become detached and aggressive toward others. Their current existence seems purposeless, and they begin to search elsewhere for a way to fill their inner void. Naturally, they turn to the most accessible medium for information: the web. At that point they become susceptible to organizations that seek out precisely such desperate youths and promise them Heaven if they only dedicate themselves to whatever purpose these organizations promote.

As a first step toward solution, youths must be educated about the risks of online connections and the interests of some organizations. Next, we must offer a true remedy to the void that has pushed them toward these dark corners of the internet in the first place.

The real change will come when youths understand the system in which they live. They need to know about the forces pulling them away from one another. They need to understand that their dislike of emotional intimacy is natural, arising from a drive they did not choose to have. They need to feel that they can accept themselves for who they are. At the same time, we need to show them that without a society, without true friendships, they will not be happy.

This dependence on society is actually quite easy to demonstrate: Ask young people what is the first thing they do when something exciting happens to them, and almost all of them will answer that they share it in social media. All people need is empathy and human contact; we just need to show them that this is the motive behind many of their actions, even desperate ones, and they will begin to examine their actions more carefully.

Next, we need to acknowledge that today's hyper-connectivity is only going to increase, as will self-centeredness. Therefore, the hardships youths are experiencing are bound to intensify unless we find a new way to connect--one that encompasses both self-absorption and connectedness.

To do that, we need to learn how to connect empathetically rather than selfishly. In that regard, Nick Clark of The Independent, published an interview with British theoretical physicist and cosmologist Stephen Hawking:

"'The human failing I would most like to correct is aggression. It may have had survival advantage in caveman days, to get more food, territory or a partner with whom to reproduce, but now it threatens to destroy us all.' The human quality the scientist would most like to magnify was empathy. 'It brings us together in a peaceful loving state.'"

In Israel, my country of residence, an organization called Arvut (mutual guarantee), has developed a method for deliberation around painful issues called the "Round Table" (RT), which addresses precisely the point of empathy. In the RT, people discuss the most sensitive political and social issues in such a way that engenders warmth and friendship, even if only an hour ago they were bitter enemies.

In Eilat, a resort town in southern Israel, the Arvut movement has set up circles where people deliberate freely and warmly, Jews, Muslims, Christians, religious, and secular, all bundled up in warm and friendly circles. The experience of human empathy overshadows any prejudice and suspicion, and offers hope for a good future for humanity.

The above is just one of many endeavors to create warmth and empathy among people. However, these efforts will succeed only if we remember that we are not uniting simply for a fleeting moment of warmth, but first and foremost to create a fundamental change in our perception. Where the "me" perspective has prevailed thus far, we must install a "we" perception. When we achieve that, hyper-connectedness and individuality will coincide naturally within us, and the conflict will be resolved.

A person with such an expansive perception grasps life in a completely different way. A sense of purpose permeates one's every action and decision, and questions about the meaning of life effortlessly disappear. When several individuals in a community develop such an attitude, they can affect positive changes throughout the community. The key to the success is to remember that today's life necessitates unity, and that if we offer our uniqueness as a tool for the betterment of society, we will not only find purpose in life, but will contribute to our communities, who will in turn support our efforts to put our skills to good use. If even a small community begins to exercise it, its people will transform their lives. Imagine what would happen if all of humanity embraced this attitude.