By now, everyone is talking about the powerful, incredible Simone Biles, the top contender for the all-around gold medal in gymnastics at the 2016 Summer Olympics in Rio.

One person who is doing the talking, however, refuses to acknowledge that Simone's parents are, in fact, her parents. His words undermine the very meaning of adoption. 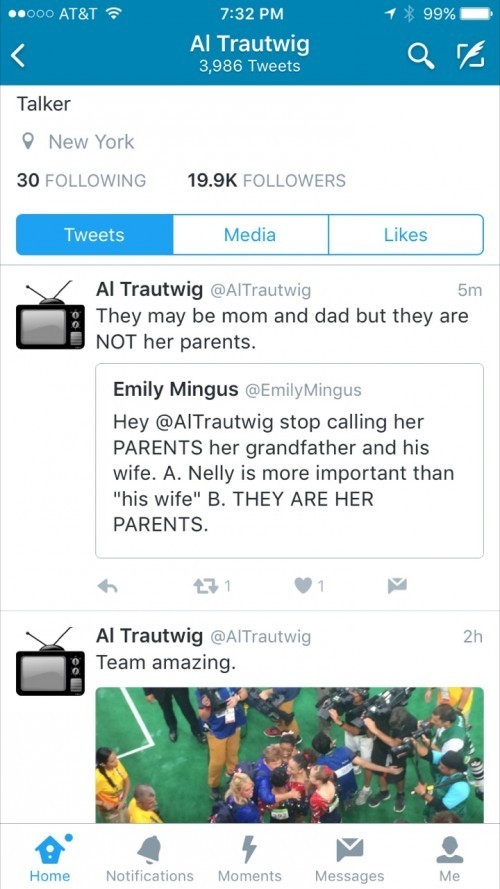 Simone and her younger sister spent time in foster care before being adopted by their maternal grandfather, Ron Biles, and his wife, Nellie. To Simone, her biggest fan is her mom, Nellie. They shared a series of loving tweets ahead of tonight's competition.

Despite Simone's very clear decision to call Ron and Nellie her parents -- because they ARE, because that is what adoption means -- sports commentator Al Trautwig repeatedly has referred on air to Ron and Nellie as "Simone's grandparents."

Twitter user @EmilyMingus sent Trautwig a tweet asking him to please stop calling Ron and Nellie Simone's grandparents. "THEY ARE HER PARENTS" she tweeted.

In a shocking response, Al Trautwig tweeted back "They may be mom and dad but they are NOT her parents."

He should ask Simone what she thinks. NBC's own Olympics site is featuring an article about Simone Biles where she is quoted as saying, "I am very fortunate that I have these parents that can come with me and support me and I can go to them after a bad day or after a good day and they always still love me." 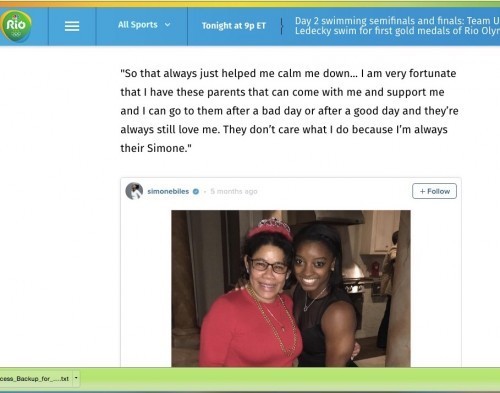 As a journalist and also a mother through adoption, I think that NBC should do a better job of educating their commentators. When Trautwig publicly denies that Ron and Nellie Biles are Simone's parents, it is a terrible blow to adoptive families everywhere. It threatens the legitimacy of Simone's own self-identity. It is not Al Trautwig's place to say whether or not Ron and Nellie are Simone's parents. His tweet brings back the pain that adoptees feel every time they are told that their mom and dad are not their real parents.

My daughter was born to another mother. She, like Simon Biles, lived in foster care before she came to us. Her dad and I are her parents. To every adoptive mother or father out there, you ARE a parent. You are validated. You are real. Your love and devotion and time and sweat and unconditional love make you a parent. Don't ask Al Trautwig. Go ask the sons and daughters who love you, who call out your name when they are scared or excited or lost or hopeful or sick or joyful. Adoption is about love and family and so much more than 130 characters in a Tweet.

After being called out on the tweet, Al Trautwig deleted it shortly after 9 pm on Sunday, August 7th.

Last night, under pressure from the public, NBC ordered Al Trautwig to delete the tweet. On Monday afternoon, August 8th, NBC finally released a statement with an apology.

"I regret that I wasn't more clear in my wording on the air," Al Trautwig said in a statement emailed by NBC Sports. "I compounded the error on Twitter, which I quickly corrected. To set the record straight, Ron and Nellie are Simone's parents."