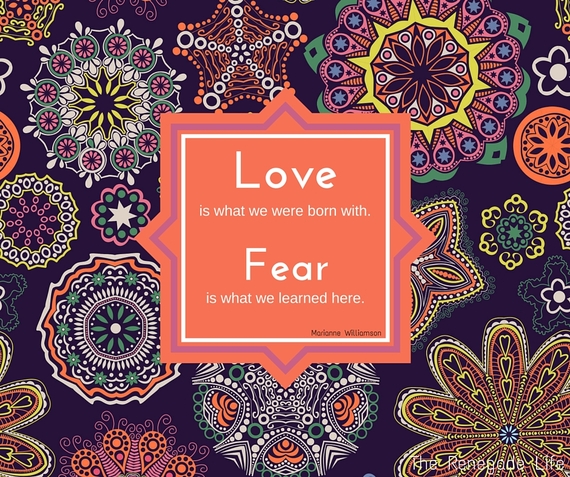 I read a book recently that was fantastic yet horrible at the same time. It's bringing out the raw part of me that I'd prefer to keep hidden. One of the reasons I subject myself to this kind of 'opportunity' is to get better at being me, and to get rid of some of my hangups. It's not easy stuff but life's not over til it's over, and I am fully responsible for how my time here turns out.

I firmly believe that in order to grow and change, I need to be intentional -- to observe my actions, thoughts and inner struggles. Writing out my fears and then seeing them differently, through eyes of love -- now there's a concept!

It's been such an unexpected process so far. I didn't have a clue, really, what I was getting into but I don't think I could ever settle for just getting by, or not finding ways to continually enhance who I am created to be.

We so easily beat ourselves up and find ways to feel guilty about so many things. Yes I said 'find ways'. These past couple of years I've become very aware of the trail guilt leaves behind me. Wouldn't you agree that life is just way too short to allow those negative thought patterns and actions to continue seeping into our brain function and taking up root in there?

It's crucial to nurture our conscience and know within ourselves that we are living authentically; however, there's also a point of awareness that what we dwell on mentally becomes the life we live. I'd have to say I'm pretty much done with guilt. "Go from me!" as my nephew used to say.

Some of the simplest phrases have already had a profound effect in my own inner thoughts and processes.

Fear has been an ongoing theme for me too these past few months. Observing it in action not just in my life but in those around me, it's apparent that it's a huge issue to tackle. It seems to drive so much of how we live. Think about it. We're told to do so many things 'just in case'. It seems everywhere I go I'm bombarded with articles or books that talk about it, so I know it's time to look at how it impacts my world. In his book Start With Why Simon Sinek says:

A powerful manipulator, fear is often used with far less nefarious motivations. We use fear to raise our kids. We use fear to motivate people to obey a code of ethics. Fear is regularly used in public service ads, say to promote child safety or AIDS awareness, or the need to wear seat belts. Anyone who was watching television in the 1980's got a heavy dose of antidrug advertising, including one often-mimicked public service ad from a federal program to combat drug abuse among teenagers: "This is your brain," the man's voice said as he held up a pristine white egg. Then he cracked the egg into a frying pan of spattering hot oil. "This is your brain on drugs...Any questions?

Fear clings to strange things. Getting our defenses up and not wanting to acknowledge our shortcomings seems to be rampant. So many of us make decisions from a place of fear.

My heart's desire is to break down those walls in me and to offer thoughts to others on being willing to not just see things differently, but to do them differently.

Some of the fears I've chosen to 'do' differently:

In all things Life, I'm determined not to let fear (or guilt) be my decision maker. What about you?

Are there life altering events you need to do instead of fear? Is 2016 the year it all changes for you? What would you attempt if you knew you could not fail? Or even if you could fail but tried anyway - for the sake of trying - or for the sake of becoming relentless with your fears?