Poverty? Loneliness? Rejection? Insecurity? Hunger? Humiliation? Anxiety? Depression? Find me a creative person who has never dealt with these issues and you'll have discovered the bionic artist.

A recent series of articles by Lightsey Darst in the Huffington Post (in which the author explains why dance is the poorest of all the art forms) outlines in excruciating detail the expenses dancers incur and the diminished incomes they face throughout the course of their professional careers. Like dancers, many writers, musicians, and other working artists can barely scrape by without the help of a generous partner, patron, family, or circle of friends.

For some, the School of Hard Knocks delivers a lifetime of dashed ambitions and never-ending disappointment. Others find ways to compensate for the lack of financial remuneration with a lifestyle filled with the kind of emotional, spiritual, and intellectual rewards that can't be purchased in a shrink-wrapped package.

When times are tough, many creative types must grit their teeth in order to survive while pursuing their artistic ambitions. Some people surprise themselves by the lengths to which they will go in order to support their dreams. Many end up having to swallow their pride in the process of making ends meet.

I first became aware of the three-person rock band named GrooveLily back in December of 2004, when TheatreWorks presented the world premiere of Striking 12 (an impressive updating of Hans Christian Andersen's tale about The Little Match Girl). Since then, the team of Valerie Vigoda, Brendan Milburn (her husband), and Gene Lewin has written:

Like many bands, GrooveLily spent long stretches on the road, performing for small audiences in church basements and private homes while wondering if their lives would ever make sense. As they traveled the country's lonely highways in a Winnebago (with a "bitchin' kitchen"), they listened to some stupefyingly bad country music, tensions continued to build, relationships started to fray, and the dream they had all been focused on seemed to evaporate into thin air.

Although the band's attempts to create a second "GrooveLily concert musical" began at a New Works Retreat in 2005, it would take seven long years before Wheelhouse would become the 60th show to receive its world premiere from TheatreWorks. As the company's artistic director, Robert Kelley, explains:

"This ode to the road was deeply rooted in the band's personal experience and drawn straight from the heart. With shocking honesty, it took the most difficult moments of their personal and professional lives and laid them bare, stunning me with its originality, self-deprecating humor, and personal truth. The music was the play, the singers were the orchestra, and the characters were the writers: old friends, nearly crushed by the weight of their own high hopes.

It's one thing to bare your soul in a diary, quite another to sing it out loud to the world. It can take years to understand the pivotal events of our lives; they haunt, agonize, and embarrass us long before coming into focus as our stepping stones to the future. At the 2005 New Works Festival, Wheelhouse had a rough outline, a few unforgettable songs, and uncertainty in every direction." 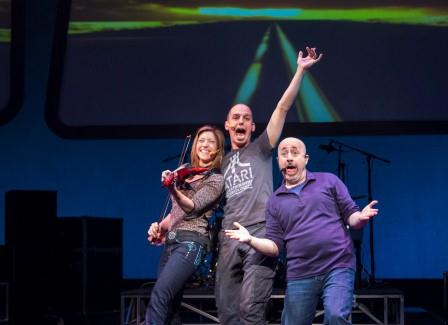 In the intervening years, Groovelily's musicians have been able to spend more time writing, take a break from extensive touring, enjoy more financial security, and settle down to raise their families. Milburn's bio currently states that:

"Brendan is still mystified to find that he is making a living as a composer: musical theater (Striking 12, Sleeping Beauty Wakes, Toy Story: The Musical), songs for animated movies (four films about Tinker Bell for Disney), and odd pop songs for Warner-Chappell and his band, GrooveLily. In addition, he's a record producer (Jenny Giering, Kevin MacCallum, GrooveLily), arranger/orchestrator/musical-helper-outer for other people (The Burglars of Hamm), and a mostly-stay-at-home dad for his six-year-old son. Brendan is happiest when stretching his brain and learning new things. Lately, that's involved delving deep into Ableton Live to develop a looping/solo performance system with Valerie Vigoda for her solo concerts; cooking gluten-free and dairy-free meals for his family; hating hot weather and yet doing Bikram Yoga regularly." 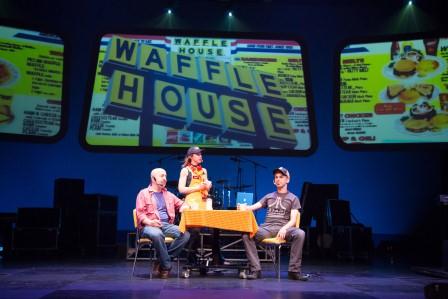 Gene Lewin, Valerie Vigoda, and Brendan Milburn in
a scene from Wheelhouse (Photo by: Tracy Martin)

What makes Wheelhouse especially interesting to me is that these three talented musicians (who are still in the early phases of their careers) have crafted a self-referential show which is highly entertaining, driven by some of their struggles to succeed, and yet manages to share the emotional and financial roller-coaster ride of an itinerant, unfamous musician's lifestyle with charm, wit, and some great songs.

The scenic design by Kate Edmunds incorporates Jason H. Thompson's projections in a way that gives the audience a genuine feeling of spending long, lonely hours on the road. Directed with a great sense of fluidity by Lisa Peterson, Wheelhouse benefits immensely from Kris Umezawa's sound design, which always showcases his singers without ever overwhelming the audience. 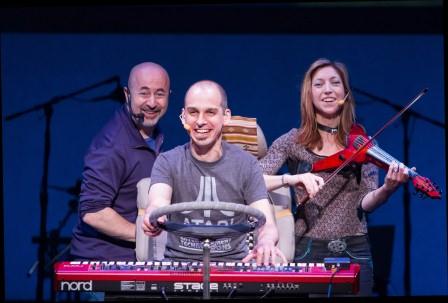 The spirited, athletic, and emotional performances by Valerie Vigoda and Brendan Milburn offer a touching contrast to Gene Lewin's more laid-back style as a drummer. The scene in which Lewin impersonates a used-car salesman is hilarious!

What sets Wheelhouse apart from many other new shows is that it is written and performed by musicians the audience genuinely cares for, and delivers GrooveLily's songs with a balance, sensitivity, and ingenuity that never fails to please. In addition to her writing and performing responsibilities with the show, Valerie Vigoda kept a video blog of the show's creative process which can be viewed on YouTube. Here are some sample clips: