Ghulam Azam, a war criminal, died in a Bangladeshi prison on October 23 while serving a 90-year sentence. During the 1971 Liberation War of Bangladesh, the Pakistani army committed one of the largest genocides of the twentieth century. Azam's party, Jamaat-e-Islami, and militias formed by Azam, actively aided the Pakistani military to kill, loot, rape, torture, as well as commit arson and other crimes. 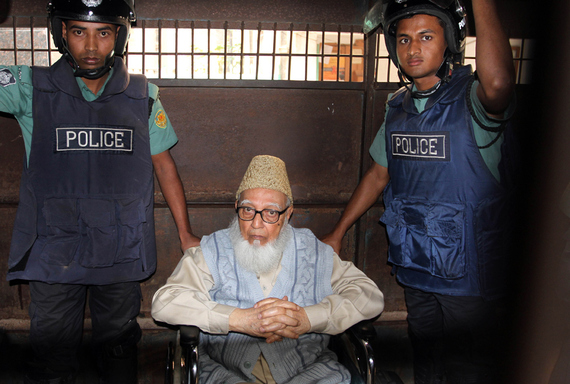 A piece was published in the Huffington Post UK on Oct 27 by Yasmin Khatun wrongly depicting Azam as a saint. This is a highly irresponsible attempt at historical revisionism, particularly given that most of the western world sided with the perpetrators of the genocide at the time.

In the offending article, Yasmin Khatun consistently refers to Azam as a "Professor." Azam was hardly a professor, he taught for barely four years in a small town high school. He never taught at the university level and never came close to meeting any requirements for a professorship. The fact that his supporters insist on referring to him as a professor is dangerously misleading.

Many Bangladeshis found a measure of redemption knowing that Azam finally died a prisoner, although even that is a tiny justice indeed, compared to the enormity of his crimes. As Bangladesh continues the battle against religious and political extremism, and forges ahead with the aims of progress and a sustainable secular democracy it must never be forgotten that the future of Bangladesh was once in peril, and threatened by the jihadist agenda of Azam and Jamaat.

It should be disturbing for everyone to have a major Western media outlet suddenly praising a convicted criminal of genocide. Even in the name of "free speech" one would never allow such denialism to pass if it pertained to the Nazi Holocaust. Why should the hundreds of thousands (some say millions) of victims of genocide in Bangladesh deserve less respect?

Azam was accused of five different types of crimes, forming a total of 61 points of complaints, including planning, provocation, involvement, conspiracy and murder. Azam had formed militia groups, such as Al-Badr and Al-Shams, and actively helped Pakistani troops to kill Bangladeshi freedom fighters and helpless civilians. Azam's active role in the genocide has been made clear since 1971, as he frequently made statements in the Daily Sangram, the mouthpiece of his party. Reports to the contrary are a travesty of journalism and any historical revisionism in the media is a danger to our future. To print anything that lionizes convicted war criminals of Bangladesh is an insult to the countless victims, and shows disrespect to the country of Bangladesh, whose freedom was earned at the highest of costs.