A Treasure of "1000 Buddha" Caves
in the Gobi Desert

Beijing's Forbidden City, the Great Wall, the Terra Cotta Warriors are routine destinations for visitors to China. But an additional UNESCO World Heritage Site is considered the country's fourth great attraction: the Mogao Caves lining the wall of a cliff in Gansu. Called "an art gallery in the desert," the site is said to be among the greatest discoveries of the twentieth century. Located near one of the major stops on the Silk Route, a visit to the extraordinary site can be combined with camel rides, sand sledding, and treks over sand dunes at the edge of the Gobi desert. 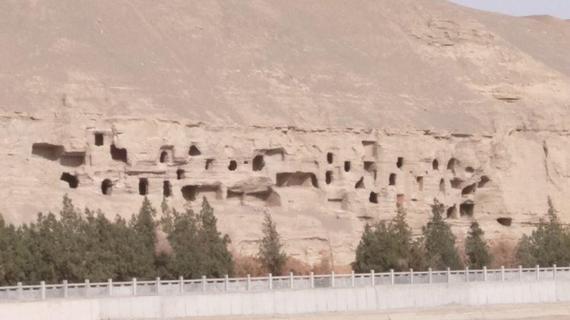 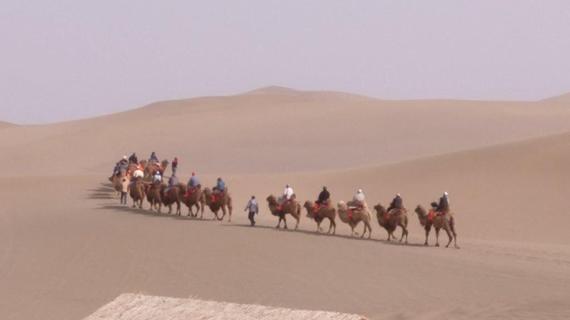 Camels and archaeology at the edge of the Gobi desert

The caves were started in 366 AD as Buddhist monk Luo Zun's response to a vision of a thousand floating Buddhas he saw in a dream. Expanded by Silk Route travelers -- pilgrims, monks, scholars, merchants-- who stopped to give thanks for successful trips or to pray for safety in their journeys to come, the site expanded through to the 14th century and eventually included over a thousand caves. The original Indian and Persian renderings of deities and animals gradually evolved toward Chinese aesthetics, and it was from here Buddhism radiated across the Chinese empire. Left undisturbed for centuries after the fall of the Yuan dynasty, partially concealed by sandstorms, they were rediscovered in 1900 by Taoist priest Wang Yuanlu who decided to restore them as his life's work.

Archeologists were only mildly interested until a few years later, when bricked-shut Cave #17 was opened and disclosed one of the greatest historical discoveries of the 20th century-- an enormous repository of ancient documents -- manuscripts, sutras, and silk paintings -- including the world's oldest complete printed book "The Diamond Sutra" dated 868 AD. Sold to early European explorers in exchange for small contributions for upkeep of the site, the precious documents now reside in museums and libraries around the world, but Cave #17, the "Library," can be seen along with a few dozen other spectacular caverns and two of the country's largest Buddhist statues. 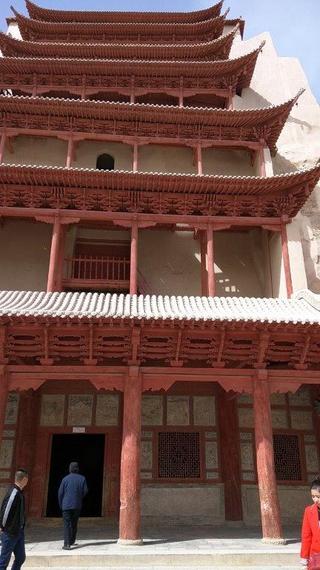 Because of fragility, visits to the site and photography are strictly regulated . Of the 600 surviving grottos, 15-30 may be open for view. Visitors first see a film setting the historical period followed by an extravaganza 4-D production with mock wind and earthquakes shaking the theater. Prepped with the context, visitors then board special buses which transport them to view the wall of caves hewn from the stretch of cliff in sections up to four stories high. Exhibits in an excellent Research and Exhibition Center describe how the caves are preserved, show reproductions of some of the plundered art, and display replicas of some of the key caves for people who want a closer look. 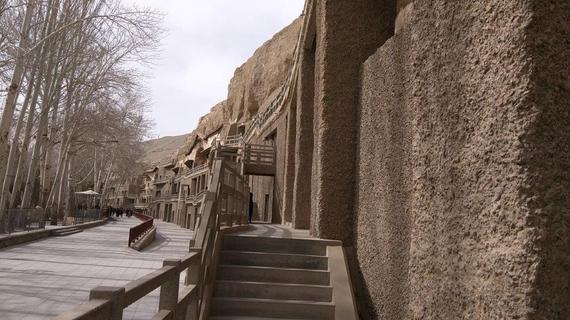 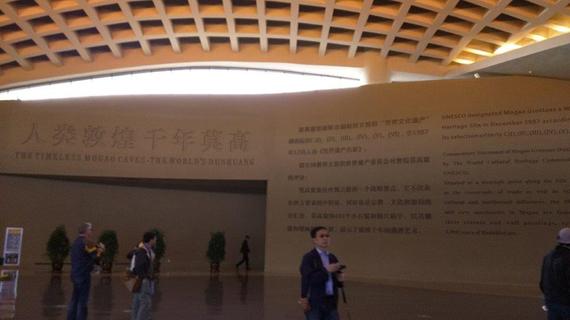 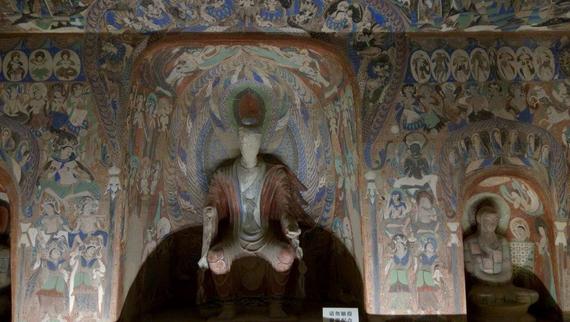 Besides the caves, there are many other reasons to visit the region. Now a colorful provincial city, midway along the Chinese section of the Silk Route, nearby Dunhuang was a notable oasis for caravan travelers. Modern visitors can rent camels, docile furry creatures which plod rhythmically and calmly in modern caravans through singing sand dunes towering 1000 feet overhead. Nearby Crescent Moon Lake is considered a miracle oasis, a half-moon shaped pond that has never dried up in over 2000 years. 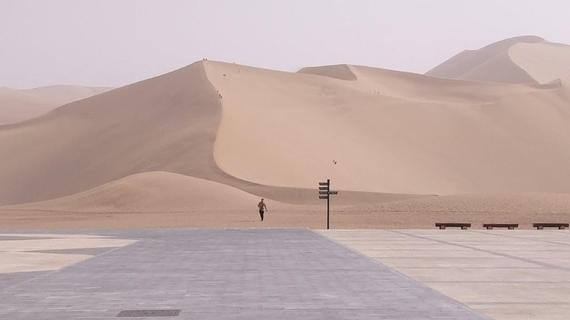 Dunhuang is a region of sand dunes 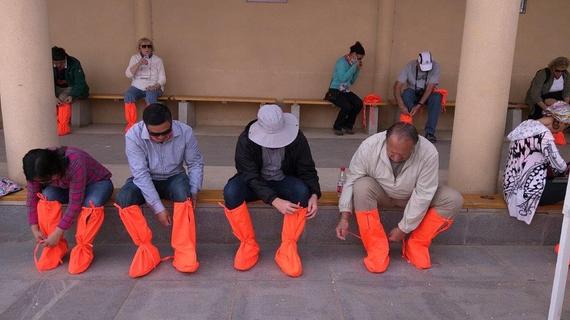 Visitors don boots to keep sand from their shoes 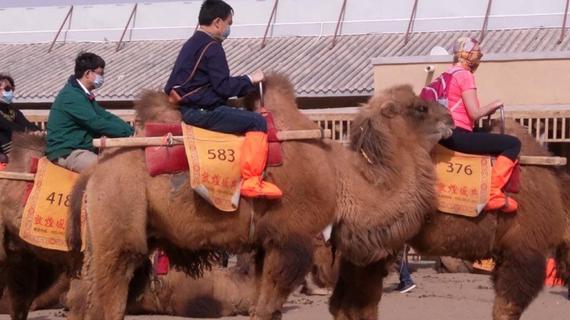 Camels can be rented for traversing the dunes 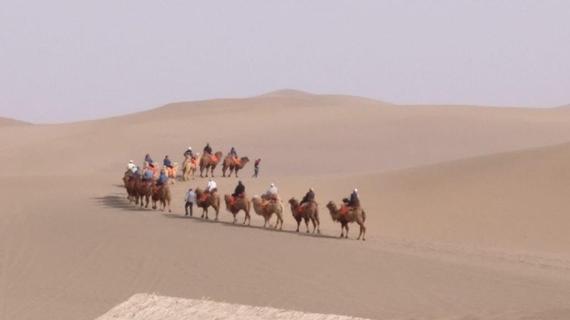 Caravans lead into the dunes 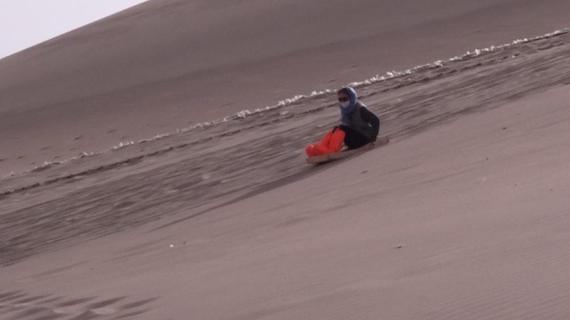 Sand sledding is a popular sport 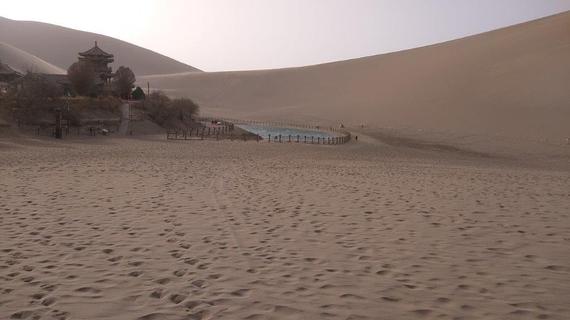 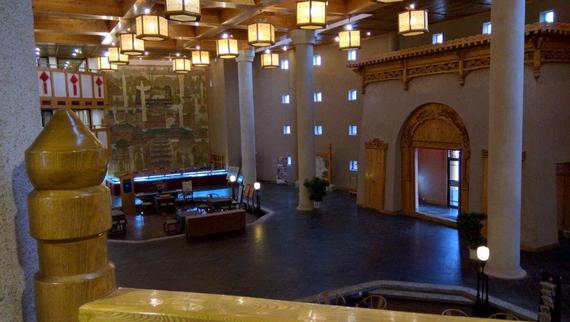 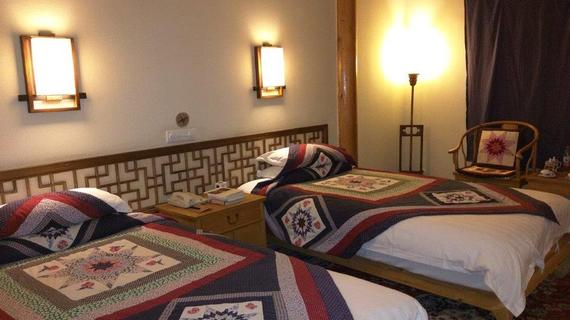 While many of the precious artifacts unearthed in Mogao can be viewed in the France, Britain, India, America, Japan, and other global locations where they were scattered after confiscation, there is nothing to match the experience of visiting the spectacular site where great portions of the world's historic legacy were discovered and revealed.